We anchored off Adams Head, deep in Port Essington, and set off in the relative cool of the morning to explore the abandoned settlement of Victoria. The temperature was still in the thirties.

In the early 1800s, England had settled parts of the eastern coast of Australia but was concerned that the northern reaches of this vast continent might be vulnerable to Dutch and French expansion from their colonies in the East Indies.

Two military bases were set up, Fort Dundas on Melville Island and Port Wellington on the Cobourg Peninsula, but both settlements failed due to the harsh conditions. The English government persisted, and in 1838 set up the civilian settlement of Victoria at a site much farther inland, at Adam Head on the shores of the large Port Essington bay. 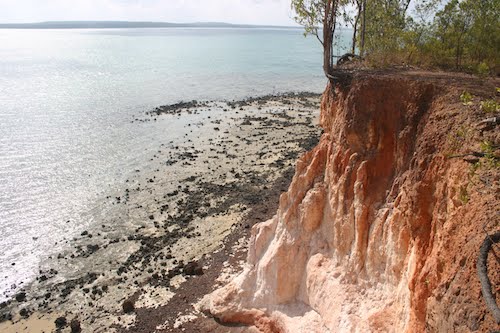 Surveys had shown that there was a plentiful supply of fresh water, and also that the area might support a successful trepang trade. We’ve seen traces of similar activity (trepang are also known as beche-de-mer, or sea cucumbers or sea slugs) all over the northern islands and coasts. Mrs Watson of Lizard Island was there because her husband was a beche-de-mer fisherman. The sea slugs themselves were traded at great profit to the Chinese who regard them as a delicacy. I tried one once in Shanghai, and it was indeed very expensive but also tasted pretty much the way that you would expect.

The settlement began bravely, with a prefabricated Governor’s House, a church, a hospital, thatched and shingled cottages, and a military barracks. 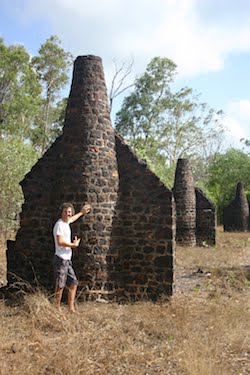 CORNISH CHIMNEYS OF THE MARRIED QUARTERS

For food they had vegetable gardens, imported water buffalo, and a peaceable trading relationship with the local aboriginals and with visiting Macassan (Indonesian) trepang fishermen.

Unfortunately the original survey had been conducted in the wet season, and for the other six months of the year the colony had to rely on ever deeper wells. 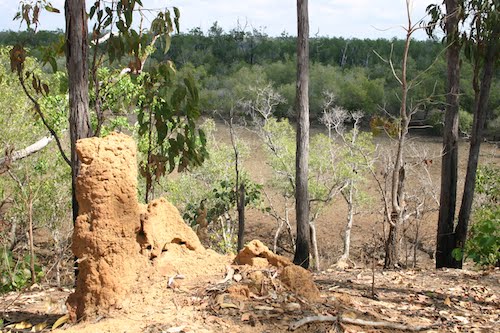 THIS WOULD BE A LAKE IN THE WET

A cyclone hit in the second year, and destroyed much of what had been built. The supply ships came only intermittently, and the soil turned out to be so poor that their gardens were barely better than subsistance. Malaria became a way of life, eventually killing almost a quarter of the residents. 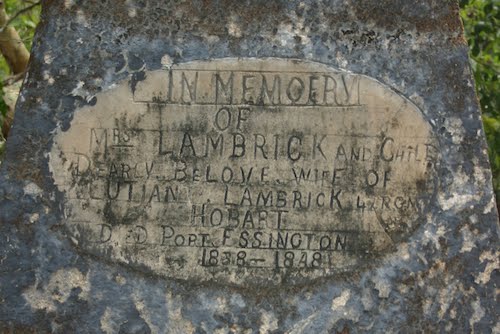 ONE OF THE FEW SURVIVING GRAVESTONES

At times fully half of the population were in hospital, not only from malaria but also from dysentery, influenza and scurvy.

After eleven hard years, the political situation had changed and foreign incursion was no longer regarded as a threat. The survivors were shipped out and the settlement was abandoned.

Some of the buildings were subsequently and intermittently used by freelance trepang fishermen and hunters tracking the now wild water buffalo, but the bush soon moved back in. It didn’t take long for most of the signs of civilisation to be erased. 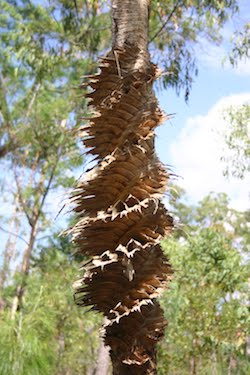 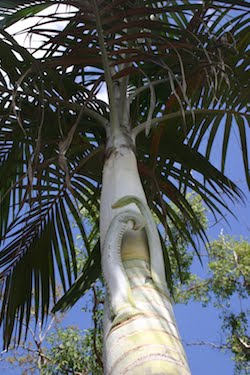