We were becoming a little jaded with the sail across the top of the Northern Territory. Access to the entire shoreline is essentially forbidden to non-Aboriginals without a permit, and permits are not easy to get. The rest of our world consists of featureless waters and small islands that we’re not allowed to visit either.

This morning we found ourselves at anchor off Black Point, Port Essington. The bay has a pronounced roll and we awoke irritable and grumpy, and not looking forward to more mindless mileage. We feel that we’ve seen little in the last thousand miles apart from sea water and the inside of a few pubs. Without our university work to keep us occupied and to fuel our discussions, we probably would have cracked long before this. Were we going too far, too fast?

Port Essington is part of a national park, and there is a ranger station at Black Point. I called up the ranger on the radio to see if it was possible to get a permit to go ashore at the nearby historical settlement of Victoria, and received the welcome news that no permit was required for day visits. Eager to see a new face after a week at sea, I tossed the dinghy over the side and rowed to shore to get more details. Just as I was setting the anchor on the beach, the ranger’s helicopter lifted off from behind the treeline and headed off seaward. Darn!

I went up to his house anyway and found the visitor centre, which was closed. Persistence paid off as I found an unlocked rear entrance and spent a happy hour or so wandering around the nice little museum there.

On the way back to the dinghy, I stopped on the beach and dug my feet into the baking hot sand. Scattered around me were hundreds of shell and coral fragments. I picked up a handful and realised that I was looking at more individual new things than I had seen in the entire past week. 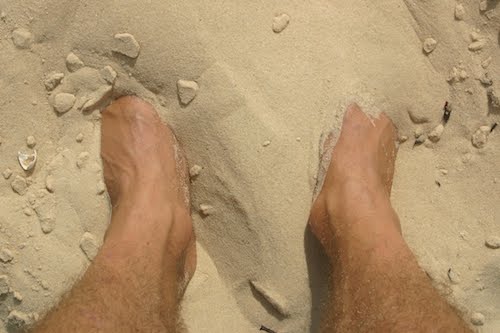 The realisation hit that, although sailing is fun, I am first and foremost a land mammal. There just isn’t enough variety on the water to keep me that interested. Rowing back to Pindimara, I imparted this new-found wisdom to Bronwyn, who of course had worked it out for herself weeks ago and was waiting for me to catch up.

We decided to take a little holiday from our holiday, and instead of continuing westward turned inland, deeper into the bay in the direction of the ruined town of Victoria some three hours away.

It felt good to be heading for a real destination that we could walk around on, rather than just another palm-fringed inaccessible beach on the way to the next one. In addition, Port Essington is sheltered from the swell but not from the trade winds, so we were soon creaming along at a steady seven knots. Flying fish sparkled across the water before us, dolphins cruised serenely alongside. Even heeled over, the boat hung reasonably steady in the flat azure sea, and Bronwyn popped below for long enough to bake a batch of scones.

Things were looking up.