We didn’t have permits to go onto aboriginal land anywhere across the Northern Territories, so we did not get off on Raragala Island and did not plan to set foot on land again until we got to Darwin. Cruisers who were doing the distance more slowly had applied for permits with variable results. One boat’s applications got repeatedly ‘lost’. Another boat got every permit that they asked for, but dated in such a way that there was no way that they could possibly use them.

Not only did we want to become embroiled in aboriginal bureaucracy, but we were also aware of the impending cyclone season, so we decided to skip Arnhem Land completely. We drew a straight line on the chart across the Arafura Sea to the Cobourg Peninsula near to Darwin.

ACROSS THE ARAFURA SEA 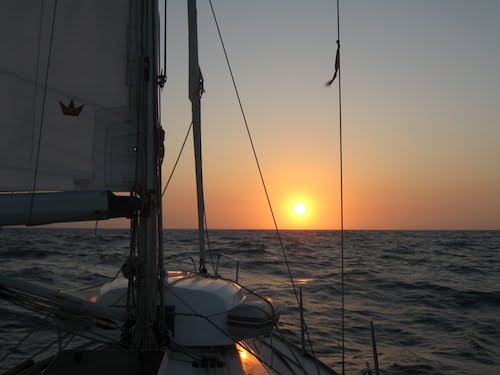 SAILING INTO THE SUNSET (A FIRST!)

We were at sea for two days and two nights, during which time we sighted no land, no ships, no planes, and only three items of interest. The first was a banded coral snake. The second was a very lost ten-inch crab, swimming at the surface miles from shore. The third was a juvenile petrel who roosted on our dodger for most of the second night, completely unconcerned with the comings and goings of crew with bright lights and cameras. 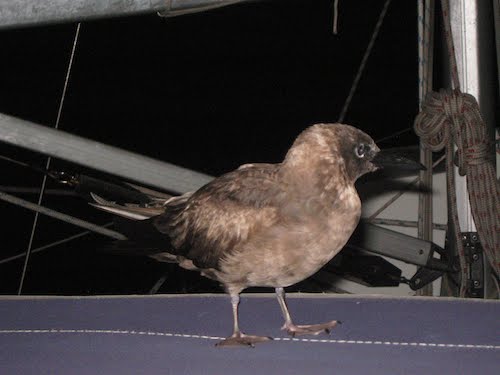 On the morning of the third day we sighted land and dropped anchor on the south-western side of Grant Island for a rest. We couldn’t go ashore, because even this was aboriginal land, but we couldn’t face any more sailing and needed to get some decent sleep. After a few hours the swell turned around and began to hit us on the beam, which is never comfortable and a sure fire trigger for lost sleep and tinkling crockery. The good news was that the sea conditions were right and there was room to swing about; I could finally try a trick that Virginia had mentioned to us months ago.

Picture this: We’re at anchor. Boats at anchor are designed to point into wind, so the wind is coming from dead ahead. The swell is slapping into us from starboard (right hand side). I got a long rope and tied one end to the anchor chain where it dropped over the bow roller, and the other end to the port stern quarter (left back) of the boat. Returning to the front of the boat, I let out ten extra metres of anchor chain, dragging that end of the rope far below the surface of the water. Strolling back to the stern end of the rope, I attached it to a winch and wound it in, dragging the stern around to port, and pointing the bow into the swell. Rather than streaming off the anchor in a straight fore-and-aft line, the boat was now hanging sideways on a Y-shaped harness. The rocking stopped. Brilliant. Thankyou, Virginia.

In the morning we got up and looked at the perfect and inviting beach. Ah well. We had no permit, and anyway it was time to move on. We hoisted sail and headed out of the bay.

Just for a change we had a perfect combination of strong following winds and a swell that was directly astern. We could move around the yacht freely, read books and concentrate on small tasks without feeling seasick. It seemed as good a time as any to learn how to make an eye splice. 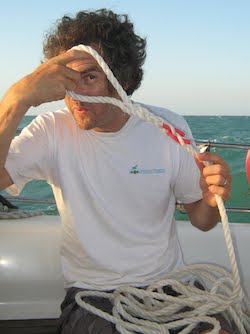 We’d planned to reach Black Point in the large bay of Port Essington by midnight, but we were making cracking progress and turned into the entrance shortly after nightfall. It was a pitch black moonless night, and much of the territory up here is not well charted. There are some spot heights and guesstimated contours, but even these are only 95% certain to be within 2 metres vertically and 500 metres horizontally, which is quite a lot of uncertainty. Nevertheless there wasn’t much that we could do about it, so we charged through in pitch darkness at something over six knots and, navigating by GPS, dropped anchor in 5 metres of water a respectable distance on the chart from the invisible reef and the invisible shore.

Once everything was ship-shape, I got out the big spotlight to have a last check for any hazards, and illuminated Black Point Beach only a few metres away in front of the bow. We hastily weighed anchor and backed off a few hundred yards before putting it back down again.

One thought on “Across the Arafura Sea”