The first barrier to our westward route was a group of three long island chains, all running parallel to each other SW to NE. The first set were the Bromby Islets sticking up ten miles from the top of mainland Arnhem Land. Then we had to cross a channel called the Malay Road and squeeze between a couple of the English Companys Islands, before finally crossing Donnington Sound and finding a route through the Wessel Islands.

The most obvious route (apart from the long way around over the top of the Wessels) was to sneak between the Brombys and Cape Wilberforce at the top of Arnhem Land, run the gap between Cotton and Wigram Islands, and then take the Gulgari Rip between Raragala and Guluwuru Islands.

The only problem with this plan was that each crossing demanded a particular time of the tide. Get it wrong and we could, for instance, face a 12 knot opposing current through the Gulgari Rip.

After a little thought and some work with the guides and tide tables we realised that if we left Gove shortly after midnight, we could use the moonlight to get out of the harbour and be crossing the Brombys at slack tide just after dawn. Then we had just enough time to get across the Malay Road and through the English Companys before the tide started flooding, after which the sail across Donnington Sound would bring us to the Gulgari Rip at the top of the following tide.

One disadvantage of the plan was that the literature was quite vague about the exact time that the tide turns in each of the passes, but we thought that we had probably figured it close enough.

We arrived at the Brombys in the pre-dawn light. The channel was half a mile across and we crossed it without any problems. 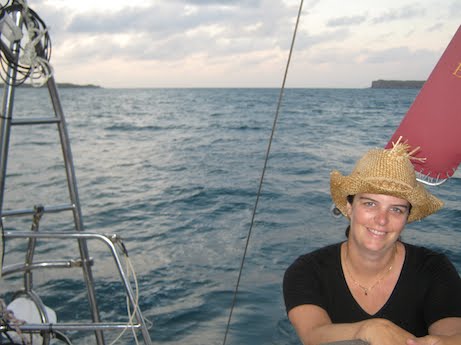 THROUGH THE FIRST GAP

The gap between Cotton and Wigram was more of a dogleg and reputed to have a four-knot rip. Even though we must have been close to slack tide we still got sucked through, and had to do some fancy footwork to avoid an area of boiling rip at the western end, where the seabirds were having a breakfast feeding frenzy. 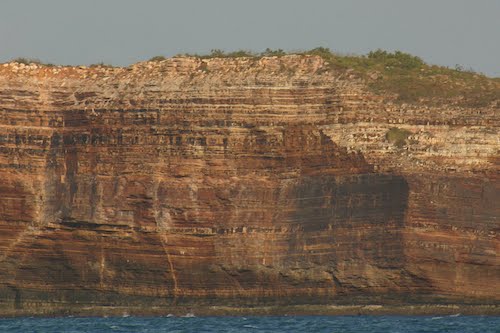 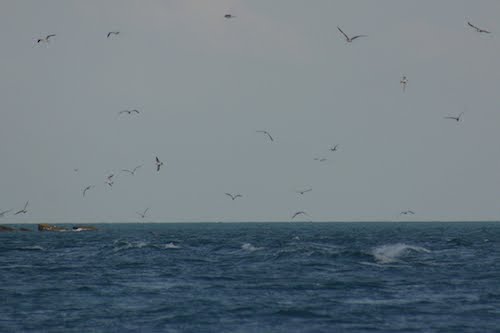 BREAKFAST AT THE RIP

It’s about fifteen miles across Donnington Sound to the Wessel Islands, so we took it in turns to sleep.

The Gulgari Rip between Raragala and Guluwuru Islands is also known as ‘The Hole in the Wall’ because it is so narrow and difficult to see. Decent winds saw us arriving half an hour early, and we were a little disappointed at first to see that from the our direction the gap was really obvious. We didn’t want to get too close without committing, but through the binoculars I could make out whitecaps which suggested that the eastward rip was still running towards us. We hove to and drifted in the sunshine for an hour while we ate lunch and waited for the time that we believed that the tide would turn.

At the appointed hour, which was slightly after high tide at faraway Gove, we reset the sails and discovered that the hole had disappeared. Even though I had memorised the surrounding cliff structure when we arrived, the gap was still completely invisible until we found precisely the right approach angle. Our first sight of it must have just been very lucky.

Hoping that we were now at the top of the tide, we sailed into the bay that funnelled us in to the gap, arriving at about half past Gove high tide. We knew that the gap was about 70 metres wide with 30 metres of that navigable, but that’s still only 3 boat lengths across and as we approached it at 5 knots it looked terrifyingly narrow. 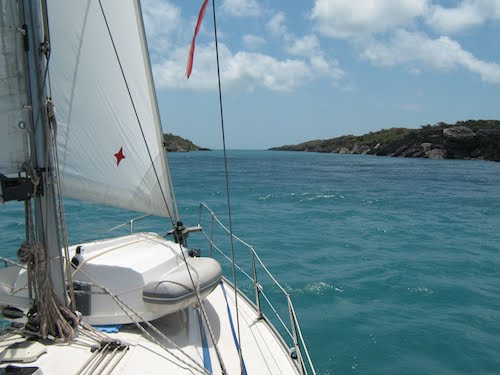 Once through the jaws, the surrounding cliffs shielded us from the winds and the sails went slack. We’d expected this and had the engine idling in preparation, but we didn’t need it because the boat started to accelerate as the Rip sucked us in.

After that, the ride got surreal. We glided with slack sails between picturesque stacks of rock on either side, with nothing to do beyond keeping the bow pointed at the far end. Here and there, people have smeared graffiti on the rocks to show that they have been through; the crew of HMAS Wollongong were particularly obvious. Tiny bays open out on either side, and it is rumoured that some of them are deep enough to shelter in if you find yourself halfway through and fighting too strong a rip. I can’t imagine trying to get into one of them with your boat already out of control. 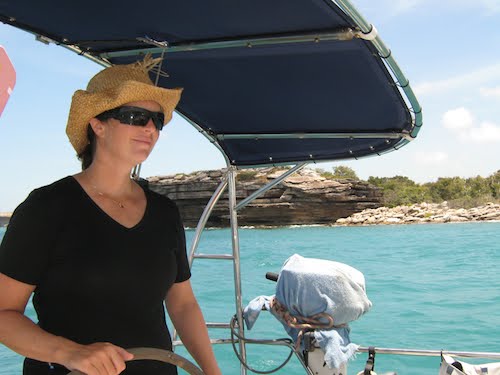 I shot some very bad video that shows some of these bays.

The Rip spat us out into the Arafura Sea, and we popped around the corner to a safe anchorage in Guruliya Bay to get some sleep. In the morning we had a long passage ahead of us.