We were intending to head back to our old anchorage by the Sandhills dunes, but in order to get there we had to first round Mud Island, a long flat sandbank close to the Brisbane River shipping channel. As we came out of the lee of the island we got into some swell that had been building up as the wind crossed the bay from the other side.

The Sandhills anchorage is very picturesque, but it is rather exposed and does suffer rather from swell, particularly when the tide changes. Not only was Mud Island acting as a buffer for the south easterly swell, but it was also closer to the Main Channel that we would be taking in the morning, so we tucked in behind it and dropped the anchor.

The dinghy was absolutely filthy from its continual dunkings in the swamp mud at the Botanical Gardens, so I took advantage of our early stop to haul it up on a halyard and scrub it out. 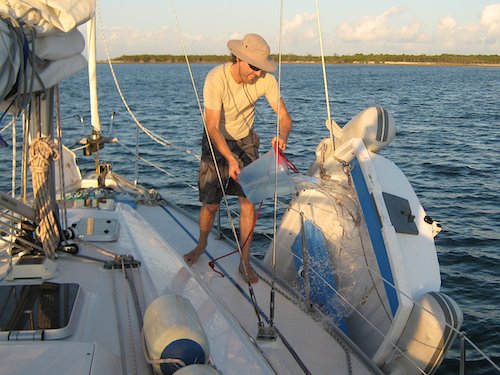 CLEANING THE SWAMP OUT OF THE DINGHY

The shallow anchorage also meant that most of our chain was still in the anchor locker. I’d been waiting for a chance to work on it, so I sat on the bow and hauled it out onto the deck. Pindimara’s original chain had been marked every 5 metres by coloured spray-paint, but this had quietly eaten away the galvanisation on the chain and suddenly, one day, it rusted into a big knot and we’d had to replace the whole thing. 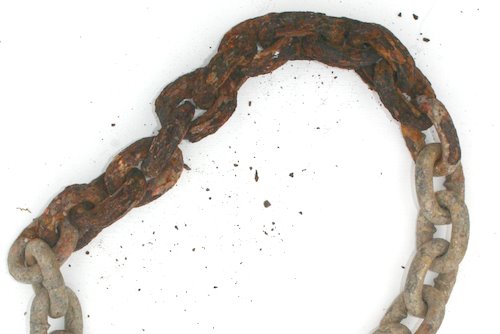 THE EFFECT OF SPRAY PAINT ON A GALVANISED CHAIN

Not wanting to destroy our new chain with the same problem, we had marked the lengths with cable ties instead of spray paint, but were finding that these interfered with the smooth progress of the chain over the winch. In fact, while anchoring in the Brisbane River, the chain jumped completely off the gypsy and the whole seventy metres plummeted uncontrollably to the bottom. This was pretty alarming. Not only is there a lot of metal moving very fast alongside your feet, but the total stationary weight is about 100 kg and when it reaches the end, it can tear the D-ring right out so that you lose anchor, chain, and possibly quite a lot of hull. Only a couple of weeks previously I’d taken the precaution of adding a loop of tripled springy silver rope to the end of our chain, so all I could do was stand there and keep my toes clear and wait to see whether it would bounce or snap.

Luckily it held, but it was time to get rid of the cable ties. To this end I obtained some water-based acrylic paint, reasoning that it might not contain quite as many noxious chemicals as the spray variety. As the sun set behind and the moon rose over Mud Island in front, I sat on the fore-deck and painstakingly brushed on two coats of primer and two coats of colour, while trying very hard not to spill any paint. This started to get quite difficult when a surprise wind blew up, thrashing the boat around and splashing me with spray. I clumsily tied down the wet and sticky chain so that it wouldn’t fall over the side, and went below for dinner. 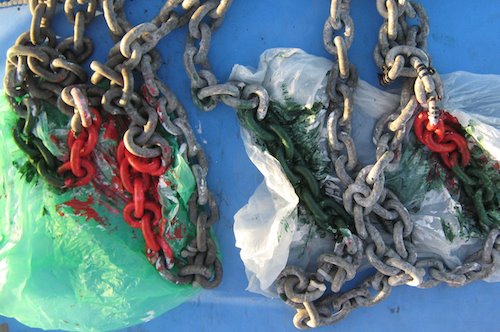 JACKSON POLLOCK, EAT YOUR HEART OUT

The sea started to get pretty sloppy. As we climbed into bed later that night, we were very glad that we were not in the open water on the other side of the bay.