We remained anchored in Moreton Bay for a few more days until all the weekend visitors had gone, and then hoisted our sails and headed across to the mouth of the Brisbane River. We had a nice beam reach at a consistent eight knots. Pindimara never used to go this fast. Either the boat’s changed, or we have.

We’d been keeping half an eye on some distant rain clouds which were scudding past out to sea, and about half way across the bay we noticed a twister dropping down from the cloud base. We double-checked and it was definitely passing by outside the bay, but it was quite a fascinating sight. Neither of us had ever seen one before. 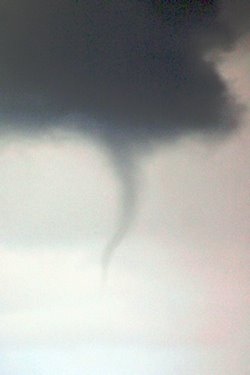 We have been following the blogged exploits of another cruiser, Bob on Capricorn, who is also circumnavigating in a Bavaria but quite a few months ahead of us. In fact he had been coming up the NSW coast behind us, and when the waterspout formed, he was unlucky enough to be on the other side of Moreton Island and directly beneath it. His furler jammed and he got very wet, but luckily survived the experience without injury.

We arrived at the main Brisbane shipping channel and dropped sails for the long motor up the river to the city centre. We were sharing the relatively narrow lane with some seriously large commercial shipping, although they were travelling slowly to minimise their bow waves and some had time to wave cheerfully from the flying bridge. 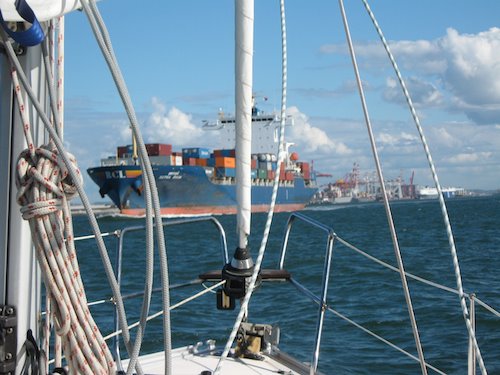 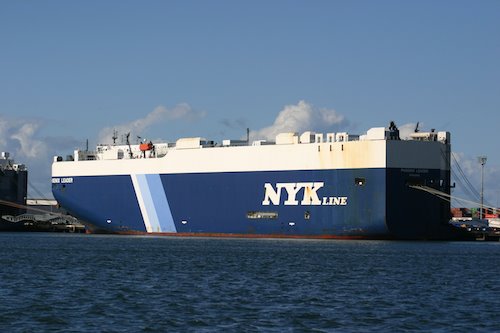 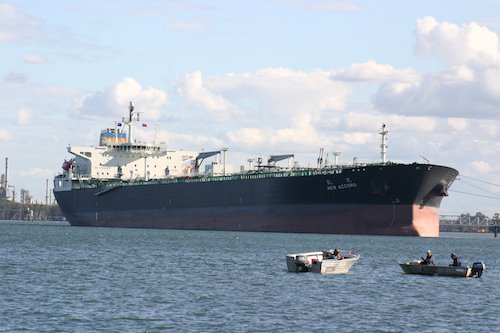 Much of the first part of the Brisbane River is taken up by LPG tanker facilities, and the smell of leaking gas was pretty strong. On the other hand, there was lots to see and the depths and leading lights were uniformly excellent. Several hours later we found ourselves chugging underneath the girders of Story Bridge and into the heart of Brisbane itself. 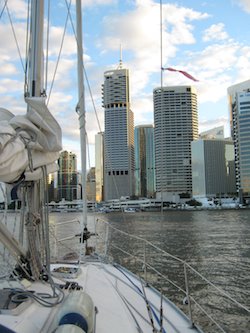 Many cruising guides mention the cheap pile berths by the Botanical Gardens, but we were aware of a lot of discussion in blogs and fora that suggested that they were permanently clogged with old hulks. We telephoned the Port Authority who run the pile berths, and they were quite definite that not only were the berths only for short term transient cruisers, but that there were currently a number of berths free, and gave us a list of berth numbers.

On our arrival, though, it was quite clear that not only were there no free berths, but that quite a number of boats didn’t look like they had been capable of moving for some years. 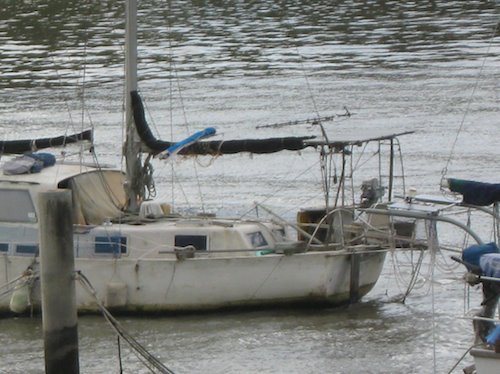 We dropped anchor around the bend and found good holding close to some mangroves, and when we later investigated the pile berths on foot, we found a large sign stating that the berths were available for a monthly rate, directly contradicting our Port Authority spokesperson.

It’s all worked out well because we’re very happy with our anchorage, which is only a short row from a Botanical Gardens piling where, with a little acrobatic effort at low tide, we can tie up our dinghy in safety and stroll into town, where we’ve been meeting up with various friends, and have drunk far too much expensive Belgian beer for our budget. 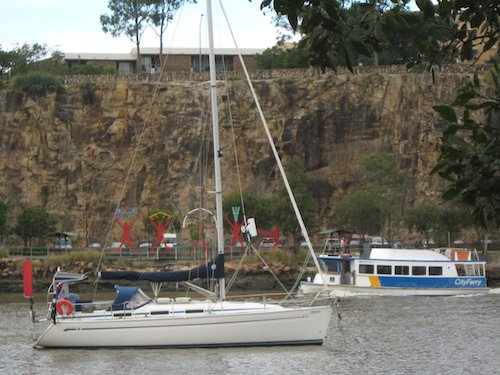 The city’s been a bit of a shock to the system. Each morning the joggers sprint past as fast as they can with a desperate look in their eyes and headphones jacked into their ears. In the streets, everybody is hurrying around without paying any attention to anything. When we sit down in a cafe, waitresses rush up before we have a chance to get comfortable, and we find that we are infringing rules about who can sit where and when. We’re finding it all a bit manic, even Bronwyn who is a self-avowed city kid and was looking forward to some bright lights. It is strange to think that only a few short months ago we were part of this same madding crowd, but already that whole life seems impossibly remote.