The bay at Iluka is a pleasant enough anchorage, and it is but a short row to the local pub and shop. More northerly winds were forecast shortly after we arrived, and we had to catch up on some schoolwork, so we decided to stay a while. 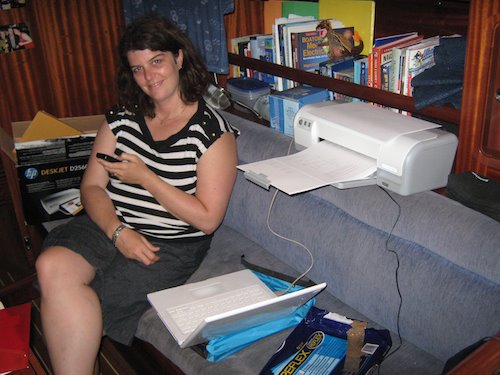 WELCOME TO THE OFFICE

The winds improved, but we had some more work to do both for university and on the boat, so we stayed a few days longer, and now we’re waiting out a 40-knot gale that is expected to last all weekend. Luckily the holding here is very good, because the boat is being thrown around like a child’s toy even inland behind two breakwaters.

It hasn’t been all work work work. Iluka has a very pleasant walk that leads you to the impressive sandstone bluffs via an unusual beach rain forest (“beware the shiny-leaved stinging tree”) and back via the very long beach itself. We’ve done the walk in both directions, and on one occasion came back through the rain forest at night. As our eyes became adjusted to the gloom, we realised that there were little scattered spots of fairy light both in the undergrowth and up in the trees. Thinking that they were glow-worms, we sneaked up on one with our trusty wind-up torch, and switched it on to reveal that we were actually looking at phosphorescent mushrooms. Very cool. 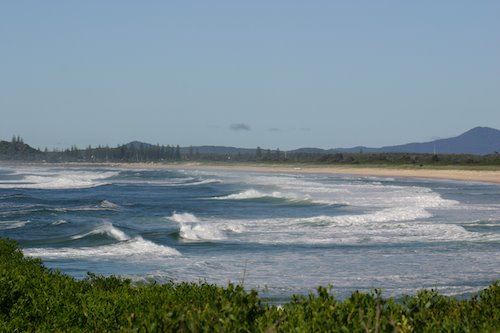 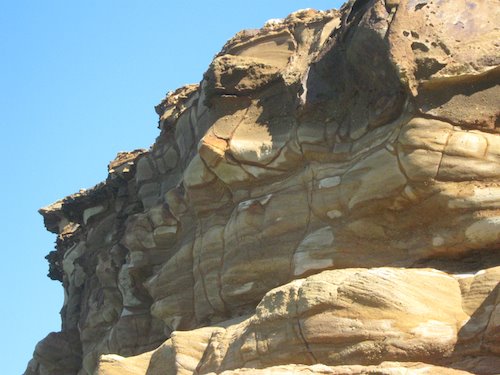 On the other side of the channel is the slightly bigger town of Yamba. As well as indulging in a bit of tourism, we needed to buy some items that weren’t available in Iluka, so we took the ferry over. It was possible to take the yacht, but we didn’t like the look of either the channel depths or of the anchoring options at the other end. This was the first time that I regretted not having an outboard motor for the tender. The tidal flow would have made for rather too exciting a row to Yamba and back, but we could have motored the dinghy over without any problem.

Still, the ferry was very pleasant, and we had breakfast in the excellent Pot Belly Pie Shop (the serving lass was wearing a tight little T-shirt reading “I got my pot belly in Yamba”). I also badly needed some shorts to wear, having torn all my existing ones to shreds, so we dropped into one of the many surf shops to buy some board shorts, thinking that they probably had the right durability in sea water. Once we’d made our purchases, I found that there was something hard in one of the pockets, which turned out to be a very unusual combination comb and beer bottle opener. Welcome to the surfer lifestyle! 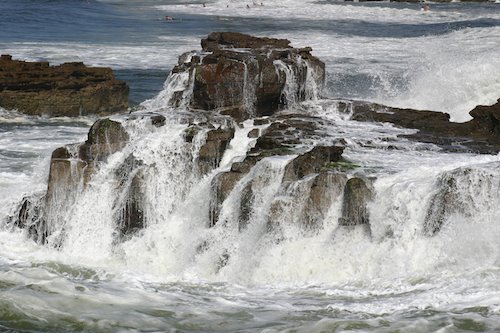 We had a nice day clambering about on the rocks, watching the surf and the surfers, fossicking in chandleries, and yes, looking for second-hand 3 horse power outboard motors. We didn’t find a motor (apparently nobody hereabouts would be seen dead with anything less than 75 hp) but we did get enough other bits and pieces to finally allow me to add some finishing touches to the sewage tank in the head, and a replacement pump so that I can finally change the engine oil.

But not today. It’s just a little bumpy at the moment.