Since we’d spent much of the preceding evening steering by the flashing white light on South Solitary Island, we decided to go and have a look at it. Presumably the name is some sort of cartographer’s joke, because there are many islands, rocks and reefs in the “Solitary” group, and they are all close in to shore. Our cruising guide mentioned that there were moorings on most of the islands, and when – after our problems last night – we double-checked on the internet we found that the whole group was part of a marine park, that anchoring and fishing were forbidden, but that visitors were welcome to use the courtesy moorings which were rated for boats up to 13 metres. An afternoon walking about on an uninhabited island sounded like a grand plan, so we set off for South Solitary.

It was such a beautiful morning that we didn’t mind that all we had was a gentle nine-knot Northerly breeze. Petrels flocked around, and squabbled over their catch. A big black dolphin that escorted us yesterday came to say hello again, but at two knots we weren’t giving him much chance to play in the bow wave, so he didn’t hang around. The only other boat on the water was a local yawl who was also obviously heading for South Solitary, so we traded tacks with him until lunchtime, when the wind increased to the high twenties and we put in a reef. He didn’t, and forged ahead.

By the time we got to South Solitary, the wind was consistently strong and the waves were pounding on the sea cliffs. We couldn’t see any of the promised moorings, and even if we’d found one, we didn’t fancy going close enough in to pick them up. We could also see that there were some buildings attached to the lighthouse, so perhaps South Solitary was inhabited after all. 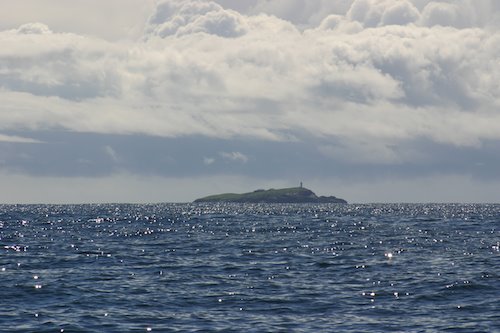 Our old foe the Eastern Australian Current was back, making tacking progress very slow, so we decided to extend our shoreward tack and see if we could tuck behind – and maybe visit – and maybe stay on – South West Solitary Island (also known as Groper Islet), which lies less than a mile from shore. Both our Lucas guide and the Marine Parks website told us that anchoring was forbidden but that there were courtesy moorings here, too.

The northerly current was strong even close in, but we finally managed to tack along the southern, sheltered side of Groper Island, where we could quite clearly see that there were no moorings at all. Making good use of our new charting software (Passage Plus, with the Australian Hydrographic Survey digital chart pack), we threaded our way through a number of reefs, shoals, breaking rocks, hidden rocks and other hazards which littered the small space between the island and the shore, before triumphantly emerging unscathed to tack along the north side of the island. There were no moorings there, either.

Evening was coming, so we gave up on our idea of overnighting on one of the Solitary Islands and began tacking in earnest to make some northing. Several hours passed as we zig-zagged back and forth between the 20 and 30 metre lines, heading Northward into a Northerly wind against a Northerly current, and then the wind died. The current was now dragging us backwards at over a knot, so it was almost a relief to give up and to start the engine. We were going to have to head further out into the stronger current now anyway, because the shoals shoreward from the next island, North West Solitary Island, looked far too complicated to thread at night. We set our sights on the white beacon on faraway North Solitary Island, and powered into the swell. That sounds exciting, but even though we were motoring at over 5 knots, we were only making 2.5 knots over the ground. It was going to be a long night. 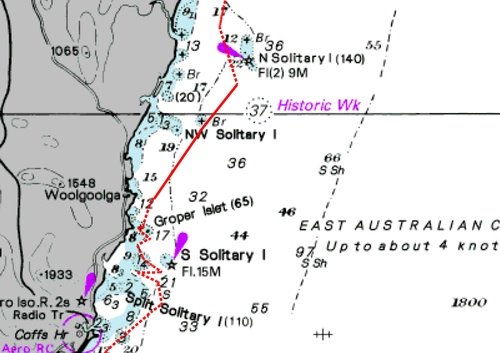 We settled into our usual night watch pattern of two and a half hours on, two and a half hours off. Pindimara is set up for single-handed cruising, which means that the helmsman doesn’t need to set foot in the cockpit proper in order to control the boat; everything can be done from the wheel. This leaves the cockpit clear, and it has become one of our favourite sleeping spots on night passages. We put down a soft mat and an inflatable cushion, and then sleep completely dressed in our sailing gear and still in harness. Being on the centreline, any rolling motion is minimised, and we are always available to leap suddenly into action if required. As a bonus, when we open our eyes we get to see the Milky Way.

I woke at around midnight when we were just coming abreast of North Solitary Island. We needed to do a bit of careful navigating to avoid a couple of nearby shoals, and then we knew that there wouldn’t be any more danger spots until half past four. Bronwyn went down to the forecabin for a proper sleep, and I motored on against the current.

Apart from the tedium, the main problem with hand-steering under motor is that your bum gets very sore from sitting on the hard wooden helmsman’s seat. Under sail, you get to move around every so often, to trim the sails or look at the view or just to stretch your legs. Properly balanced, the boat is quite capable of sailing itself for surprisingly long distances even with Harriet turned off, but under power it is much less forgiving and you need to keep a firm hand and quite an eagle eye on the compass.

I tried a few different arrangements before finding that I could lie on a soft cushion up in the aft corner, drape my arms over the targa rail, and steer using one of my feet while still being able to see the compass and the sea ahead. Much better. 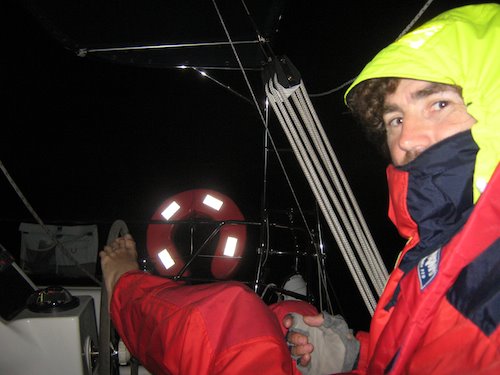 Time passes remarkably quickly on watch. A few hours went by, and we swapped places. Usually we just sleep until we hear the sails flapping or a bad drop off a swell – a sure sign that the helmsman is getting tired – but this time I set my alarm for 4 am so that we could tackle the next shoal together. Since the tidal stream was still pushing us backwards and sideways, it was difficult to steer a course in the dark that would ensure that we stayed out of trouble, so it was much easier for one of us to steer and for the other to call out new headings from the GPS and chart computer.

Once clear of the shoal, Bronwyn headed for bed and I sat and looked forward to the dawn. It rained a little, but our ever-so-expensive targa is brilliant at keeping the helm dry, and in any case I had my sailing gear on. The hours passed, the skies cleared, and the first vestiges of dawn touched the eastern sky.

The mind plays strange tricks when you’re tired, and I find it particularly hard to judge the wind direction at the end of a watch. However, since we were still motoring along into a mild 9-knot /northerly headwind, it wasn’t terribly important. On one of my regular sweeps of the horizon I suddenly noticed a tall black sail silhouetted against the pre-dawn horizon. He was far, far out, and was not showing any running lights. Idly I wondered where he’d come from; had he tried to beat the current by going dozens of miles to seaward, or was he perhaps arriving from New Zealand? Perhaps he wasn’t showing any lights because his batteries had died overnight, or perhaps he was so far away that for him it was already dawn and he’d switched them off. In either case, this part of the coast is all wilderness and he was going to be disappointed when he found out that he’d come in ten miles short of Iluka and would have to spend the next few hours tacking up the coast.

I chugged on, hoping that the rising sun would give me a change of wind. Every ten minutes or so I checked over my shoulder, and I could still just make out the dark shape coming toward me. The next time that I looked, his profile had changed and although he was still many miles away, he was now heading north up the coast. I wondered how on earth he’d managed that, since he was now going directly into a headwind, and pondered idly on dark ghost ships passing in the night.

Suddenly I realised that, of course, that the reason that he’d turned was that the wind had changed and we suddenly had a nice beam reach all the way to Iluka. I undid the preventer on the main sail, unfurled the headsail, killed the engine and gratefully accepted a blissfully silent four knots of speed. I glanced over to my dark companion to see how he was doing. The sun had now risen in a blaze of orange and blue, giving me clear visibility from horizon to horizon, and there was no other boat in sight. 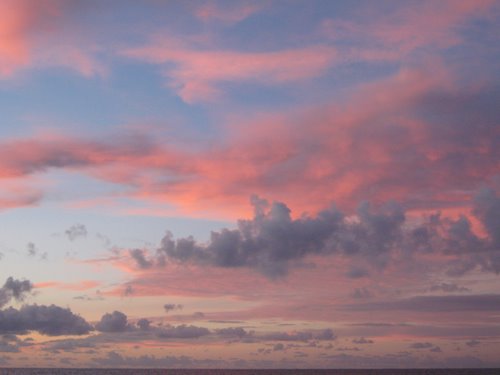 I SEE NO SHIPS 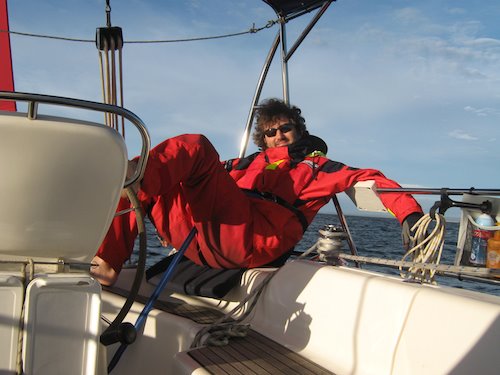 JUST ANOTHER DAY AT THE OFFICE

2 thoughts on “The Solitary Islands”