Carefully timing the tides, we went to bed for some rest before getting up and leaving at midnight. It was a starry but moon-less night, there were almost no lights on the shore of Bathurst Island, and there was no wind at all. The backwash from the steaming light off the back of the furled foresail gave a strange, misty air to the world, so that we seemed to be coccooned in an ethereal blanket. We may have left a little late, as I forgot that it would take nearly 2 hours to get out of Gordon Bay, but the tide sucked us out and then gave us a 3.5 knot boost toward Darwin.

Despite the complete absence of any wind, the water got quite exciting, a roller coaster ride. At one point we were smashing through standing waves and I was wondering how Bronwyn, even though she is a champion sleeper, could possibly be snoozing in the fore-peak. As far as I could imagine, she must have been in the air half the time. Then the whole yacht went airborne off one wave and ploughed into the next, washing the decks of the accumulated mud and ash, and replacing them with sand and shells. A tousled head appeared in the companionway. “How fast are we going?” she asked, before heading sleepily back to bed.

A little later the propeller didn’t seem to be able to get any traction. Bear in mind that it was completely black. I peered into the small pool of light cast by the stern light, and could just make out that the water was bubbling and boiling beneath us. Presumably there was so much air in the thrashing water that the prop was cavitating.

Sliding sideways into the Beagle Gulf, I suddenly had an inspiration and realised that I might be able reprogram part of the autopilot to display the GPS ‘course over ground’. Then I could judge the tidal set without continually going below to check our position on the chart. I don’t know why I didn’t think of it before. It worked a treat, and while I was at it I added a display for the water temperature. For the record, in the middle of the night in September, it was 27 centigrade. No wonder it is popular with crocodiles.

The sun came up, and the sea became flat an placid in all directions. We couldn’t see the shore and were completely alone. 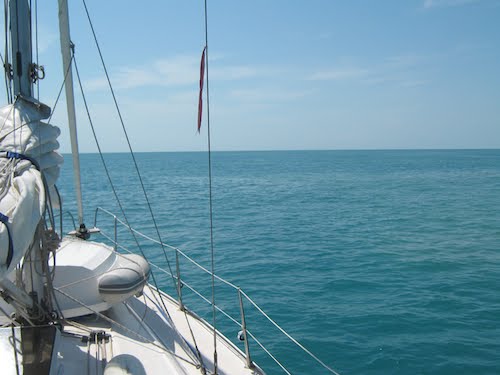 Suddenly an enormous cargo ship appeared, in a great hurry to get somewhere. It passed us by and disappeared again. 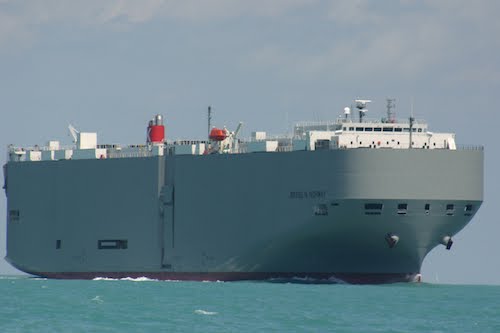 WHERE DID THAT COME FROM?

Time passed. There was not a breath of wind. We motored.

The tide started to pick us up as planned for the final approach into Darwin, slowly increasing the boost until we were doing over 10 knots.

We could see the Darwin skyline, but we couldn’t get a mobile phone connection. Broadband internet was working, though, so we used Skype to call the closest marina, Cullem. They explained that although they did have a free berth, we would be charged $240 for the privilege of opening the lock gate. I think not. We called Tipperary Marina, who were able to fit us in at a more reasonable price. Although they were another four miles upriver, the continuing tide made mincemeat of the distance.

The approach to Tipperary was interesting, up a river which dries out at low tide. We maintained radio contact with Keith the lockmaster, and as we were passing a seemingly unbroken rock wall, he asked us if we could see him waving. Eventually we spotted him in the dusk, and realised that there was an all-but-invisible break in the wall. It was like the Gulgari Rip all over again, but this gap was only seven metres wide.

We negotiated the lock without any problems, and found ourselves in a trim and tidy little marina full of smart long-term liveaboards. Keith was wonderfully helpful and did a great job of making us feel welcome.

The showers were excellent.