There isn’t too much to do around Tipperary Waters marina, although the two cafes on the shore are very good and we understand that a bar will be opening soon. The Dinah Sailing club down the road is the only place to get a drink, and although friendly enough it isn’t exactly spectacular. However, public transport is cheap, and it only costs two dollars to get the bus into town and about ten to take the taxi back again.

After so long in the back of beyond, it was surprisingly great to get a good dose of civilisation. We had some excellent tapas at the Moorish Cafe in town, and together with Rob from Ku Ching we tackled the enormous seafood platter at Crustaceans On The Wharf. 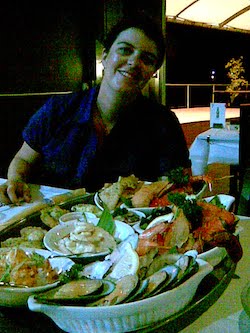 We also had a good party session up and down Mitchell Street, which is the restaurant and bar district, and met some fun and interesting people (that’s you, Carlee).

It’s funny that we’re seeing a completely different Darwin to our last visit. That time it was christmas and there was nobody here and nothing was open. Right now in September, the place is hopping. Last night we went to the famous market at Mindle Beach. As well as the crowds milling around in the market itself, there must have been ten thousand people sitting quietly on the beach watching the sunset.

We’re very aware that the wet season seems to be coming early this year. It is very hot and very sticky, and although it isn’t actually raining, the sky is continually threatening. 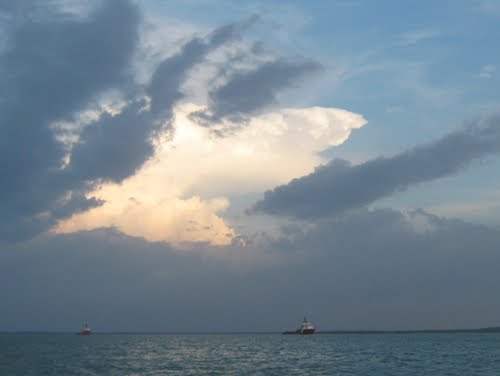 Two yachts that were heading for Perth recently gave up and turned around and came back, saying that conditions are impossible. Since that’s the direction that we’re heading, we’ve spent a lot of time canvassing the local cruisers, and even though we’re aware that one man’s “impossible” is another woman’s “fun sail”, there is a solid consensus is that we’re looking at a very hard trip down the coast.

Faced with a rough ride, and aware that since we’ve started rushing along the coastline we haven’t been enjoying ourselves half as much as we ought to, we’ve decided to leave Pindimara in Darwin for the wet and cyclone seasons, and to come back and finish the trip in the middle of next year. Not only does it give us a chance to do some work and replenish the coffers, but it also means that we’ll be able to take our time cruising the Kimberleys rather than continually rushing along and checking over our shoulders for a cyclone.

One thought on “Darwin”