Rather than take our little 3 horsepower tender across the rather unpredictable channel between Horn Island and Thursday Island, we caught the ferry.

TI (as it is known locally) is less than a square mile of tropical island, and very pleasant. The people that we met could be divided into the ones that were working in the shops, who were either grumpy or apparently bemused that we wanted to buy anything, and the people who were not working in shops, who were universally happy and smiling and having a good time. Certainly the pubs were doing a roaring trade. I was particularly taken by the sign outside the Royal Hotel, which as well as offering “the loudest music in town”, issued the stern declaration that it would refuse to serve anybody “with visual armpit hair”.

We visited the very pretty catholic church, and also the island’s graveyard which contains a great many memorials to islanders who died far too young while diving for pearl and trochus shells. There was also a section for Japanese fisherman who had died chasing the same dream. 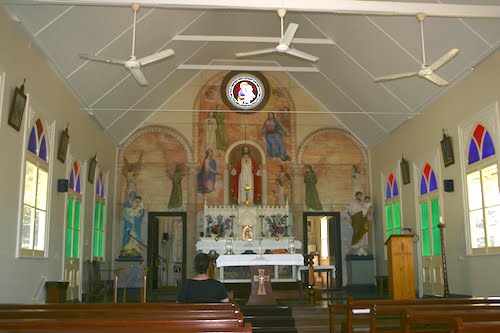 One other curious feature of the graveyard was the popularity of the grave markers as scaffolding for termite nests.

Australian Customs regards TI very much as their front line against not only immigrants but also pests and diseases. Their big launch was continually running up and down the channel, checking out the boats and boarding incoming yachts and confiscating their fresh food supplies.

We had heard that, even though we were not arriving from abroad, we would still need to get a certificate of authenticity from the supermarkets which would allow us to keep our fresh food if we were stopped on the way back to the mainland. There was a colourful but uninformative sign on the ferry dock which seemed to back this up, but when we asked at the supermarket they said that all we needed to do was to keep the receipt. We kept our purchases to an absolute minimum just in case, and then ran into a uniformed AQIS (quarantine) guy at the dock. He told us that we didn’t even need the receipt, but then admitted that he’d only been on the job for a week and really had no idea…