There is a cluster of islands a few hours north of Cape York, out in the Torres Strait and on the way to Papua New Guinea. Although they are part of Australia, most of them have been placed off limits to visitors by the Torres Strait Islanders who live there. In the middle of the group, though, are two islands that we can get to.

Thursday Island is well known in the yachting community because it is a convenient place to stop and rest if you are following the trades from the Pacific to destinations westward. In some ways this is a bit odd, because TI (as it is known) offers few facilities to yachts, and the anchorage is poor holding in a vicious current.

We chose to anchor a mile away across the channel by Horn Island, which boasts a calm and comfortable anchorage and a regular ferry to TI.

After sleeping for most of the day, we ventured out onto Horn Island to look around. It comprises only a couple of streets and seems to exist mainly to service the local airstrip (TI itself is far too small to land planes on). 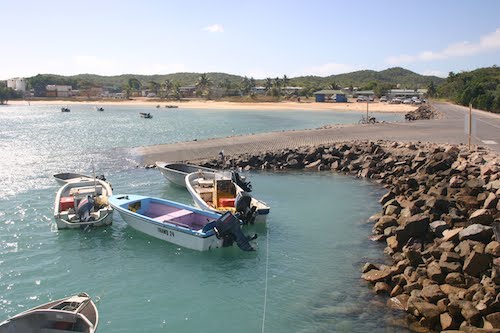 We naturally gravitated to the only pub, the Wongai Hotel, for a cold beer. Before long we were chatting to Charlotte the barmaid, and then to Matt the off duty duty manager, and then before not too many more beers we seemed to know everybody in the pub.

As the night wore on we switched from beer to wine, then from wine to spirits. The pub closed, Bob the landlord invited us all back to his pool for skinny-dipping and more beers, and then there was an increasingly blurred round of house visits until finally we found ourselves back on Pindimara mixing cocktails as the party continued.

A great pub, a great night, and I really don’t know how I managed to wake up and ferry Matt and Lucy back to the dock in the tender in the morning. Certainly the crew of the ferry said later that it had been very funny to watch. I didn’t even see any darn ferry.