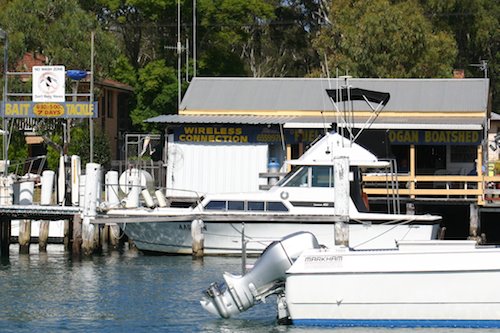 DUNBOGAN BOATSHED, OUR MARINA NEAR LAURIETON

Because of the inclement weather, we haven’t moved from Laurieton in Camden Haven. On the other hand, we would much rather be in here than out there. The news has been showing pictures of floods and mayhem; the locals are talking about boats dis-masted and abandoned, and the weather bureau reports wind speeds in excess of 60 knots and swells over 7 metres. All the while we have been bobbing more or less serenely at our mooring, although the wind did get a bit fresh now and again. One gust almost knocked us down in a flurry of flying crockery, and on another night although we couldn’t see our actual wind speed indicator (it’s on deck and we were warm and dry inside), our wind generator clocked 7 amps, which is a record and probably represents well over 40 knots.

The weather reports continued to broadcast doom and gloom, so we took a stroll down to the entrance bar to see what it looked like from the land. It was a pleasant walk past an enormous lagoon packed with oyster leases and along the causeway to the head, where we were greeted by shrieks and screams from the water. In fact it was only some kids boogie-boarding in the protection of the breakwater. They had some decent surf to play in, but the bar itself looked impassable, and the sea beyond was a maelstrom. 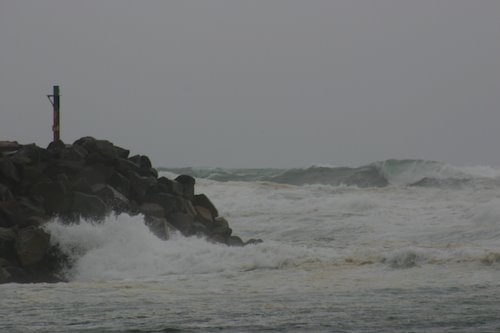 I USUALLY LIKE A WET BAR, BUT I’LL SKIP THIS ONE 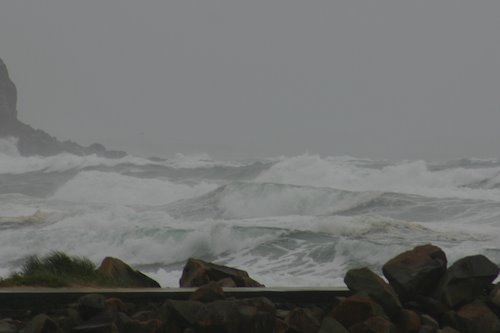 NICE DAY FOR A SAIL

That night, I announced that rather than walk all the way around the bay, I would row us across the river to the pub, a distance of perhaps 300 metres. This would be the work of a moment on a flat lake or sheltered bay, but we had thus far avoided the attempt because of the fast-flowing tidal streams. It took me about an hour to row upstream to my rather well-deserved pint, and then, some hours later, about the same to row back in the dark against the now incoming tide. Not exactly a lesson learned, but certainly some calluses earned. Bronwyn will tell you with some glee that she even heard me muttering something about buying an outboard.

This is a pleasant spot to stop over. Flocks of pelicans follow the fishermen, and sea eagles float overhead. As well as the inevitable cleaning and maintenance tasks, we’ve been able to catch up and even get slightly ahead with our schoolwork, which has been particularly useful for Bronwyn because she suddenly found that in order to complete one particular assignment, she needs to learn how to use AutoCAD, which is not something you pick up in five minutes.

When the time came to go to the launderette (which is, again, across the river), we chose to take the whole yacht rather than just the dinghy, and to fill up with fuel, water and gas on the way. On that particular day, the marina was being manned by Graham, coxwain of the local Marine Rescue, and he was gracious enough to compliment us on our effortless docking in opposing wind and tide, commenting more than once that “not many yachties here could have pulled off a move like that”, which gave us a pleasant warm fuzzy feeling. Luckily we didn’t disgrace ourselves when docking at the Marine Rescue jetty opposite to offload the laundry, and we must have looked vaguely professional because Bob the radio operator invited us inside for coffee and a chat.

There was another cruising boat here, Liquid Motion, which we had seen in Port Stephens and which had arrived in Camden Haven shortly after us. We never did get to speak to the skipper, but we saw him attempt the bar shortly after we’d gone down to see it. He didn’t make it, and came back, but on the next tide he was gone, after what Bob called “a lumpy exit”. We wish him luck because he was heading straight into a nor’easter, but the word on the grapevine said that he was in a hurry to be gone.

We’re in no hurry; we’ll wait for nice friendly conditions before we leave. In fact, the weather is shaping us to give us a good start on the dawn tide on Tuesday, and we’re aiming to bypass all the urban centres such as Port Maquarrie and Coffs and go straight to Yamba, where we intend to spend a few days exploring the Clarence River.

2 thoughts on “Sojourn in Laurieton”