As the hull speed dropped, we realised that there was quite a crowd of people watching us crossing the bar. They turned away looking a little disappointed, so I guess we must have made a clean entry. Now we just had to navigate the channel up to the anchorage, which we already knew was going to be very shallow. We did have a chart, but it bore the warning ‘Shifting sands change regularly. Ignore this chart and use the markers’. The channel was only a few boat lengths wide, and scattered with navigation buoys which led us a merry path back and forth with only a metre and sometimes less under the keel. One buoy took us very close to a fisherman on shore, who politely reeled in his line and then made humorous zig-zag motions with his hands.

I was simultaneously focussed on keeping the speed under 2 knots despite the following tide, and keeping an eagle eye on the depth sounder. That left Bronwyn to spot and call out the navigation buoys, a task made somewhat difficult by the fact that it was dusk and the automated switches that turned on their flashing lights were not particularly synchronised. Thus we would see two flashing port markers and a starboard, and then a minute later a previously unlit buoy which we had taken to be a sand bank marker would suddenly start flashing and change our route completely.

Eventually we fumbled our way to the end of the navigable channel in full darkness, dropped the anchor, and fell into a deep and undisturbed sleep.

The next morning I was awoken by the howl of full-bore outboards, and went on deck to see what seemed to be the whole local community going fishing, all racing their tinnies at full speed past the 4-knot speed limit signs. After the wakes had died away, I had a look around at our surroundings and found them to be very pleasant indeed. Oyster beds lined the shore, with drying sand banks here and there. To one side loomed Brother Mountain with an RSL (non Aussies – Retired Serviceman’s League, a kind of pub with cheap beer subsidised by gambling) and a fishing wharf, and to the other were a few houses and a small marina. All around were pelicans balanced comically on pilings, and a handful of other yachts, mainly apparently local and almost all much smaller than ours. No wonder we had stirred up so much interest when crossing the bar. 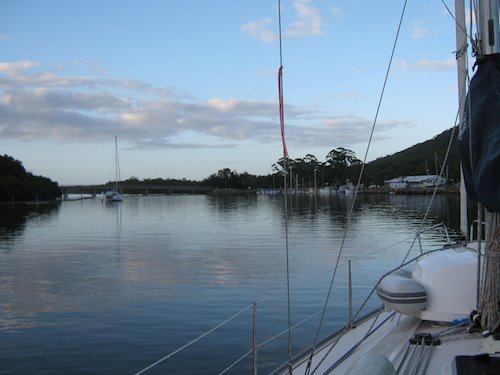 High tide came, and with it a wicked overrun which pulled us out into mid stream and started dragging our anchor. We couldn’t get it to re-set, so we hauled it up and dropped it on the inside of a curve next to a sand bank, with only a metre of spare depth and one boat length from drying sand, so we thought it prudent to test our GPS anchor alarm. After a little experimentation and some trigonometry, we found that it worked very well indeed.

We knew that this new spot would become untenable at low tide, so we looked around for another option. There was deep water over by the RSL, but the only other visiting cruiser was already at anchor there, and he was spinning violently in circles and from side to side, apparently under control of his wind-vane, and we thought it prudent to stay clear. We phoned Michael and Judy, the owners of Dunbogan Marina, and were assured that there was deep water under their swing moorings. The price was very cheap, and they had a hot shower, so we motored in and picked one up. After staring at the blinking depth sounder for a while – there would only be 50 cm beneath us at low tide – we switched it off and resolved not to look at it again.

After setting up the wind vane and unlimbering the tender, we rowed to shore and had a long and enjoyable shower before walking to the RSL for a welcome Sunday roast and a few glasses of porter.