The official Hydrographic chart of Moreton Bay shows two beaconed channels that lead from the sea and through the shifting sand shoals to the bay itself. The biggest is the North West Channel, which is dredged to at least 15 metres and carries large cargo and cruise liner traffic to Brisbane. This can only be accessed from the far north of the entrance, some five hours away from our current position as we bobbed around in the rain, swell and darkness. Much closer to us was the North East Channel, and connecting us to it were two unmarked but still navigable channels known as the Inner and Outer Freeman. The Inner Freeman was far too shallow and had a notorious bar, but the Outer Freeman seemed to offer us good depths all the way across, apart from a bit at the far end where it dropped to six metres of shifting sands at either of two spurs that lead onto the North East Passage. With our 2 metre keel, this still gave us at least 4 metres of clear water even at the lowest tide.

The downside of this plan, of course, was that it was pitch dark and pouring with rain, and we were tired and had never been here before. On the other hand, our chart was only a month old and we had practised navigating with GPS at close quarters in the Solitary Islands. We really needed to get out of the swell, which was making us sick. We decided to go for it.

Navigating Pindimara by instruments requires co-ordinated teamwork and perfect trust. At the helm, Bronwyn was driving completely blind, focussed on steering a course by compass alone. This is very difficult. Usually you pick a distant object on the required bearing and aim for it, but Moreton Bay at night is a very confusing place. The shoaling area alone covers over a hundred square miles and is criss-crossed with channel markers and scattered with warning beacons both far and near, providing the helm with a shifting landscape of colour with few stable markers. Bronwyn’s only option was to stare eagle-eyed at the red glow of the compass and to try to compensate for drift and windage.

Down below, my whole world consisted of a small blinking cursor that represented our GPS position on the chart, and the shouted depth soundings from the helm. I had to judge from the cursor’s continually updated orientation and position how we were being affected by any currents or rips, and to call up course amendments as required, as well as trying to interpret Bronwyn’s depth soundings in the light of the chart contours in front of me. Every few minutes I would pop my head out of the companionway and take a compass bearing on one of the few static lighthouses as backup; electronics can fail, and charts can be wrong.

At first (after a short break when I had to run up on deck and lose my dinner over the side) it all went well, with the depth soundings corresponding well to the chart. We successfully negotiated a couple of unseen shoals, and were approaching the zone of 6 metre shifting sands. It was time to decide whether to take the relatively wide northerly passage, or the more southerly gutter. The latter was two miles long and only 500 metres wide, but would cut an hour off our journey time. It was already midnight. The currents were manageable. We headed south.

The bottom rose rapidly as the sides of the gutter closed in. Just as we passed the 6 metre contour, Bronwyn called out “four”, which was perfect because the sounder measures depth from the bottom of our 2 metre keel. I breathed a sigh of relief. The gutter was where it was supposed to be.

A following current began to push us along. Bronwyn called out “Three” and then “Two”. I stared at the chart, which showed us perfectly centred in the six-metre gutter. The sand must have shifted. We had a hasty discussion and agreed that if we came too close to bottoming out – or indeed hit – then Bronwyn would turn sharply to port and try to retrace her course, although this was going to be increasingly difficult as the current continued to sweep us along. We knew that on either side of us, invisible in the darkness, were the two large and impenetrable Venus Banks. Presumably either one or both had been leaking or drifting into the gutter. Bronwyn called out “One point eight!”

We were one mile in, with another mile to go. If we made it through, then we would emerge right on top of a flashing red channel marker delineating the edge of the North East Channel. I called up the bearing, and Bronwyn said that she couldn’t see the light. I ran up on deck with a couple of check bearings on surrounding lighthouses, but we seemed to be exactly where we were supposed to be, albeit in scarily shallow water. Perhaps the red beacon was somehow hidden behind a sand bank. Perhaps.

How deep were we now? One point six metres. This wasn’t so good. We were running blind deep in a maze of continually shifting channels, in the pitch dark in the middle of the night; our gutter was steadily disappearing from under us and the channel that we were heading for had gone missing.

I know how scary it is to be driving blind when you know that you’re lost, so summoning my best confident voice I called up course corrections to port and to starboard to see if by some miracle I could find deeper water. Bronwyn, on the other hand, knows how scary it is to be sitting there extemporising when your tools have failed and everything depends on you, so she omitted to mention that we now only had 60 centimetres under the keel. The minutes passed as we quested back and forth, sometimes a bit deeper and sometimes a bit shallower, never quite hitting the bottom but never quite gaining any depth. Then at about 1 am Bronwyn called “Two metres! Three!” and we were through.

There was still no sign of the beacon, even though it was supposed to be only 500 metres away, so I called a course change that would bring us out right on top of it. We arrived, and there was nothing there. Where was the channel?

We put the motor into neutral and drifted under our triple-reefed main in what the chart said was the middle of the North East Channel. There should have been a line of coloured beacons stretching out to the north, but although the far horizon sparkled with other lights, our channel was nowhere to be seen. The Port Authority must have removed the markers without informing the Hydrographic Survey, because our chart had only been updated a month before. 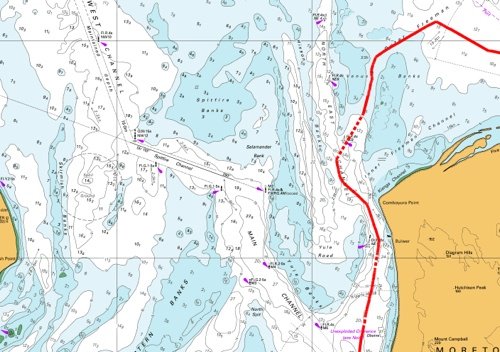 THREADING THE NEEDLE AT MORETON BAY

Here and there in the darkness we could make out the riding lights of tinnies and small fishing boats, and occasionally one would shine a torch at us in apparent disbelief. What on earth is that great big yacht doing out here?

We couldn’t drift forever in these conflicting currents, so we went back to our instruments. Luckily the southernmost end of the North Eastern Channel was originally marked not by a navigation marker but by a westerly danger light, which was still in place. This gave us a friendly flashing point to aim for, and within half an hour we had squeezed between the danger marker and Moreton Island and were within clear sight of the main, North Western Channel.

The main channel was packed with seriously large container ships and cruise liners, edging slowly through the darkness and probably terrified of running down a fisherman. We chose to stay well away, and went looking for somewhere to anchor.

The obvious places were along the edge of Moreton Island, but first we needed to pass over a dumping ground for unexploded military ordinance. After that we tried for Sholl Bank at Tangalooma, but the anchor bounced off impenetrable gravel. At least it gave us a chance to drop the mainsail. It was three o’clock in the morning and we were very, very tired.

We pored over the chart, and settled on a remote and fairly sheltered bay about eight miles away. We worked our way through the last of the shoals and into Moreton Bay proper, where we found ourselves bashing into enormous head-on swells. We were so tired now that we were motoring in thirty-minute shifts, grabbing alternate naps in the cockpit in between.

The first tinges of dawn touched the horizon ahead, and I simultaneously spotted the shore-based navigation light at Kounungai which marked our chosen anchorage. This piece of Moreton Island was supposed to be uninhabited, so what were all those extra white lights along the shore?

The dawn light grew stronger and I started to laugh out loud. They were the mast-head anchor lights of other boats! Obviously the holding was good. We dropped the pick in ten metres and, ignoring the bouncing swell, fell into a long, deep and exhausted sleep.