The anchor made a few dragging noises in the night, but when I ran up on deck it clearly hadn’t moved at all, so we put it down to the chain clattering over some underground rock shelf as we swung.

In the morning we got a clearer view of our anchorage. The starboard beacon about twenty metres away marked a very active shoal ground, whose frothing waves we had seen glistening in the moonlight when we arrived. 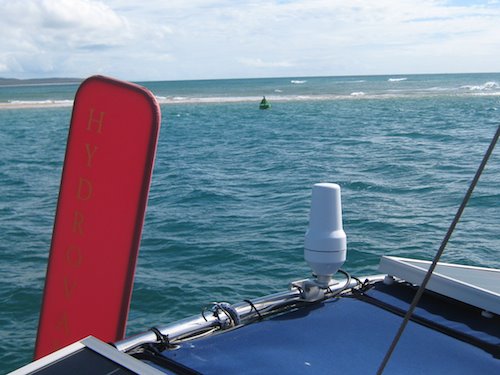 The white iso beacon on the other side of us marked a rocky outcrop projecting into the channel. There was room to get past this rock at high tide and into the inner bay and beach where we could see a number of other boats at anchor, but we were happy with our privacy and with our ability to leave quickly without worrying about either daylight or tide, so we stayed where we were.

Pancake Creek turned out to be our favourite anchorage so far, and we stayed for a couple of days. One afternoon we pumped up our inflatable kayak and went exploring.

There were many miles of secluded little beaches, some showing signs of repeated return visits in the form of home-made swings, tables, firepits and the occasional beach chair. We paddled past a few of them and then dragged the kayak up over the water line while we went ashore, where we soon found an old boardwalk. The boards themselves were almost completely rotted, but the path was still a reasonably clear and ran in a dead straight line up through the woods of the peninsula. 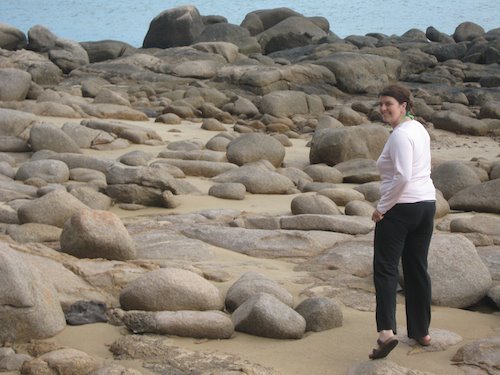 Although there weren’t many visible flowers, the forest was delicately perfumed and alive with butterflies and birds. We passed banksia trees heavily laden with pods, and grasses bearing tall rushes several metres high. 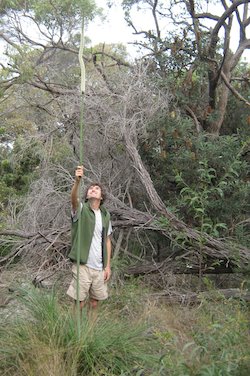 The track eventually led out onto the dunes and finally up to Burnett Head itself, where we found a lovingly restored lighthouse with pristine white out-buildings. We met the caretaker, who was part of the voluntary group that maintain it and who was doing his one-month live-in stint for the year. He claimed that the fully automated light, which we had seen at a distance of 20 miles, is powered by only a 100 watt bulb. He also told us that our boardwalk was the original mule track that was used to ferry supplies up from Pancake Creek, but that now they came by “Larc”, which is an amphibious tourist bus that regularly visits the seaward side of Bustard Head.

We strolled out a little way along the Larc track which gave us a tremendous view across Pancake Creek’s (non-navigable) rear entrance and inner waterways. It looks like a tempting cruising ground for a shallow-draft dinghy or perhaps even a trailer-sailer, and we’d love to come back and spend some more time there. 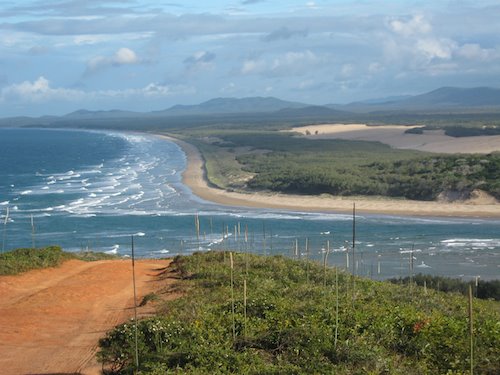 Back in Pancake Creek we stopped for a refreshing sunset bathe on the beach before paddling back to the boat where we played cribbage and drank wine while our yorkshire pudding baked in the oven.

It’s a great spot, but since it’s out of range of both telephone and internet, we couldn’t stay for too long because it was time for both of us to do our exams. I needed to fly to Kalgoorlie for a field course, and Bronwyn needed to find a university that would provide her with an invigilator; nearby Gladstone seemed ideal because it had a marina, an airport, and a university. We set sail and had a very pleasant trip, arriving in the late afternoon.

The port was curiously quiet. We sailed along the wide commercial shipping channel, surrounded by enormous gravel loaders and industrial plant, all of which were shut down and silent. Just when I was beginning to entertain fanciful theories about a worldwide plague virus that had struck everybody down while we were away, a bulk carrier emerged from behind a headland and thundered gently by. 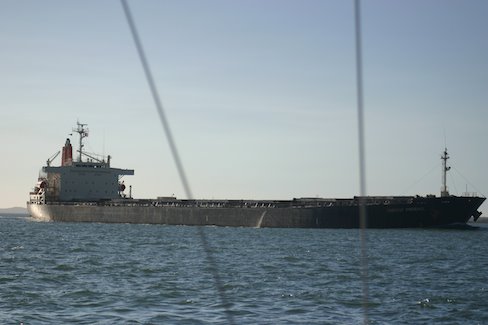