Motoring out of Port Bundaberg, we gave way to a couple of fishing trawlers coming in after a night’s work. They were accompanied by the usual flocks of seagulls eager to catch the guts and scraps thrown overboard as the fishermen cleaned their catch, but in addition they were accompanied by at least half a dozen sea eagles also vying for the same thing. 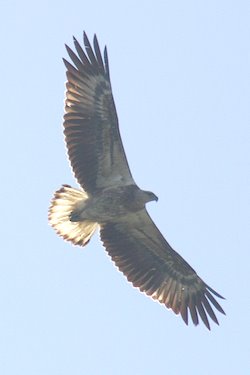 We must have missed a good party, too, because somebody had driven their ute into the river. 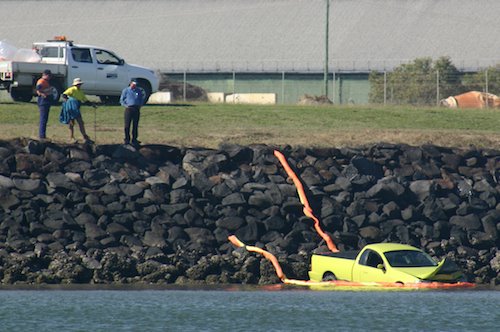 Once out into the open sea and running at a useful six knots, I fired up the engine and idled it to play with the water maker, which was now running through a shiny new circuit breaker. It worked beautifully, generating ten litres of water in three hours. Not exactly enough for a bath, but sufficient to maintain our independence from marina water. My next task is to see if I can power it using the tow generator rather than the engine, but the tow generator is out of service at the moment because I have cannibalised some of it’s parts to fix something else.

Although the weather was beautiful, we could see the occasional squall moving past in the distance. We’ve noticed that they do usually march past either out to sea or inland of us, leaving the strip just offshore generally free from rain. Later that afternoon, though, an almost invisible squall came out of a double rainbow in a cloudless sky and hit us broadside. The rain was so perfectly horizontal that one side of the cockpit stayed completely dry while the other ran with storm water, soaking us instantly. After a minute or so the squall moved on, leaving behind it a much improved wind direction that enabled us to put the swell behind us as night fell and we headed for the reefs of Bustard Head’s innovatively named Inner, Middle and Outer rocks.

It was now quite dark and we were navigating by GPS again, aided by the two lighthouses on the shore. Just as we arrived at the gap between Outer and Middle Rocks, another squall came through to the south of us and eclipsed the lights; quite a feat in the case of Bustard Head which is rated at 19 mile visibility and we were only a couple of miles away. A big swell picked us up and we surfed through in complete darkness, very exhilarating.

We were heading for Pancake Creek, a sheltered patch of water under the double peninsular of Bustard Head and Clews Point. We had a number of charts which disagreed on the navigation markers that we might find. Popping up and down between cockpit and chart table, I quickly realised that the reality was different from any of them. I was getting very nervous; the admiralty charts showed us approaching shoals and rocks, in the dark and carried along by the tide. Bronwyn, however, was at the helm and had been watching the instruments. She was confident that the depths were looking OK, so we ran the gap and stopped only a few boat lengths away from a port marker on a rock, a starboard marker on a roaring shoal, and a dimly seen iso marker on a rock ridge. The anchor bounced a few times on rock and then caught solidly in the fast-flowing current. A few minutes were enough to convince us that we weren’t drifting anywhere, so we put out a little more chain to counter the rising tide – but not too much to allow us to swing and hit any of the three navigation lights – and went to sleep.