Our next plan was to go back to Lindeman Island and to have another attempt at exploring it, after abandoning our previous attempt due to an uncomfortable swell.

Lindeman lay a few hours to the south. Mikayla did the whole of the day’s sail, from motoring off the anchor to putting up the sails, steering all the way to Lindeman Island, and then dropping the sails and the anchor when we got there. 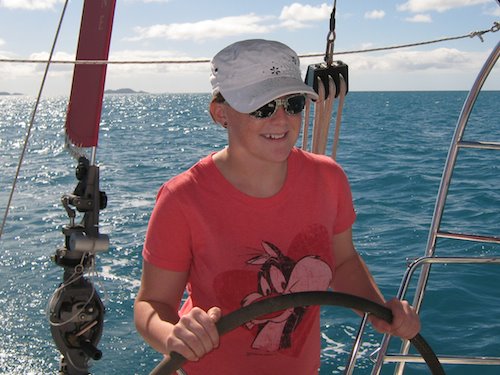 THE CREW, HARD AT WORK

There really wasn’t much left for us to do apart from laze around on deck. 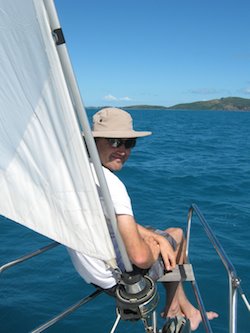 THIS IS THE LIFE!

We were running low on fresh food, so we put out the trolling line to see if we could catch our second ever fish. On the way through the fast-running Solway Channel we hooked something silver, but didn’t have too long to get excited about it, because it jumped off what turned out to be a blunt hook. We didn’t get another bite all day, and made a note to get out the sharpening file later that night. 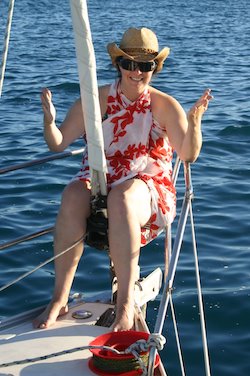 THE ONE THAT GOT AWAY

Because the wind had come round to the north, we headed for the other side of the island from our previous visit. We wandered around on the beach there hoping to connect with the national parks trail that we’d seen on the northern tip, but the plant growth was so thick that we couldn’t get more than a few tens of metres inshore.

Giving up on walking, we explored in the dinghy, and found a pebble beach where we spent a happy afternoon looking at stones and coral. 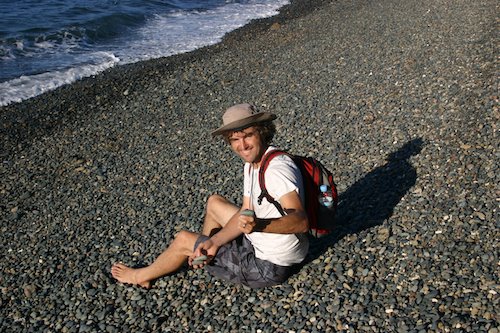 Exhausted after our gruelling day, we returned to the boat, where Bronwyn knocked up a fine repast from dried and canned ingredients. No more fresh food until we get to Cairns.

The night was reasonably comfortable but the forecast gentle northerly turned into a proper storm as the promised ridge came through early. The boat got thrashed about a bit, but the swell stayed on the bow so we weren’t overly unhappy.

The ridge brought with it a southerly change, so instead of continuing our exploration of Lindeman, we decided to hop over to nearby Shaw Island where there was convenient shelter. Before we left, though, Mikayla and I went back to the pebble beach and collected enough spheroidal rocks in different colours to make up a set of boules, along with a chunk of white coral to use as a jack.

Once ashore on Shaw, we put them to the test, and had a fine boules tournament up and down the beach.