We woke after a comfortable night under Shaw Island to find turtles browsing the reef, and a whole school of 40 cm batfish cleaning the bottom of the boat. 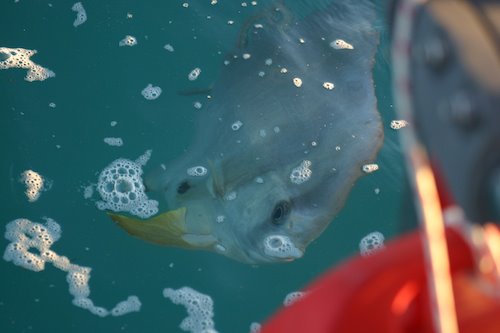 After breakfast it was time to close our circumnavigation of the Whitsundays Group and return to Hamilton Island.

Good things and bad things happened on our trip up through the Whitsunday Passage. There was a fair wind, but a quartering swell. We didn’t get any bites on the trolling line, but we did get a spectacular aerial display from a young humpback whale and her calf. Then, as we were admiring the picturesque lighthouse on Dent Island, something enormous must have sneaked up and eaten not only our hook and spoon, but also half of the metal trace line. All we got back was a few frayed metal ends.

The forecast was for southerlies, but we were getting northerlies, so we decided to drop anchor in the protection of Refuge Bay in Nara Inlet. It was a little crowded but we found room to squeeze in and anchored in millpond conditions as the wind raged overhead.

We woke up at 4 am to give Mikayla a taste of night sailing. The southerly was finally blustering through as we raised sail under the stars, and Mikayla took us up to seven knots toward South Molle Island as the first touches of dawn tinged the sky, topping it off by baking a bread loaf that was crusty perfection itself. 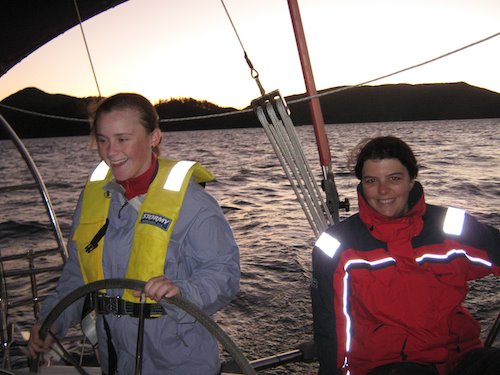 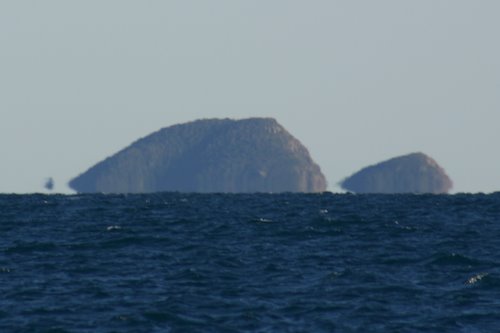 You’re not allowed to go ashore at South Molle because it is a private resort, but we anchored just off the cliffs for a leisurely brunch before tackling the fast tack across the somewhat wild strait to Hamilton Island. Dreading another night on the evil buoys, we’d booked a night in the marina, who actually had a valet waiting outside the entrance to guide us in. I suppose that is the flip side of paying nearly $100 for one night’s berth.

Then… showers! Blessed unlimited streams of piping hot water! Followed by a leisurely beer as we watched the golf carts bimble up and down the waterfront, and then an enjoyable fresh fish dinner at the rather nice Mariners restaurant. Not a bad end to a great little holiday. Next week we start cruising again.