Before we left Sydney, somebody – we can’t remember who – predicted that we wouldn’t make it far up the Queensland coast before I got fed up with rowing everywhere and bought an outboard motor for the tender. Up to now I’ve been happy to use the oars, but these last few weeks of wind and tide have forced me to reconsider. Having had some not so wonderful experiences with an old second-hand outboard, we bit the bullet and bought a brand new Yamaha 3 horsepower 2-stroke.

It’s been a ball. We drove it straight out of the shop and over the river to an uninhabited little island near to Yamba, just because we could. 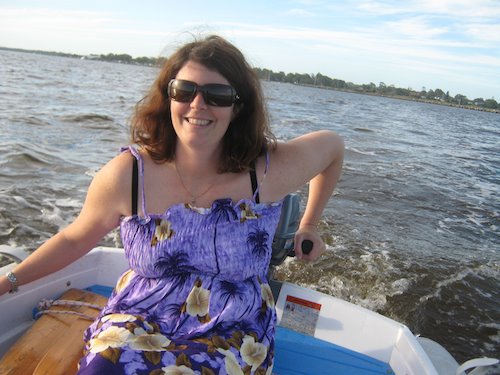 That was yesterday. Today, while Bronwyn’s been working on her CAD assignment, I’ve been running back and forth to the shore, fetching water to fill our tanks, as well as going for the odd burn around the bay just for the absolute hell of it.

And I’ve had to learn new tricks. For instance, now that our dinghy has an engine sticking out underneath, I can’t just run it up onto the shore, jump out and tie it up like I’ve been used to. Instead, I’ve bought a small anchor, and the sequence goes something like this: Approach shore, avoid weed and rocks, look for a shallow bit, slow down, lift the engine halfway out of the water, chug inshore until my nerve gives out, throw the anchor, put the engine in neutral, and step out into the sea. If it’s too deep, I haul on the anchor rope until I float over to the anchor, pull it out of the water, throw it a bit further, repeat. This manoeuvre is called “kedging” and is remarkably effective. We just hope that we never have to do it with the yacht.

The motor is brand new, but doesn’t run very well at the moment because we’re using up the old and dirty fuel in our fuel can. We’re kind of stuck with this, as there isn’t a socially acceptable way of disposing of old fuel (chuck it in the sea and set light to it?), so we just have to keep using it up until it’s gone and then we can replace it with good stuff. Shouldn’t be long now.

Meanwhile, I’ll just pop over to the breakwater with the camera to see if I can photograph any lizards. 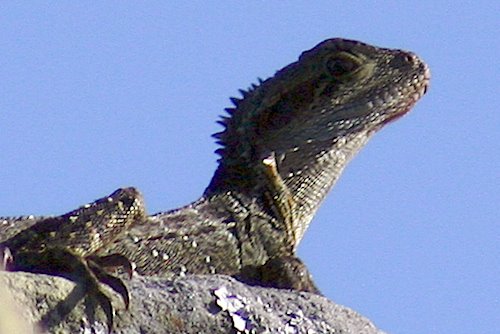 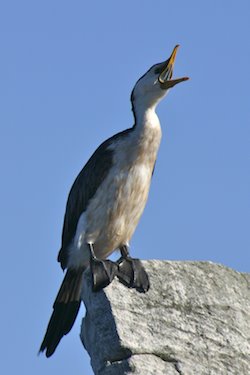 WILL YOU STOP BURNING UP AND DOWN NEXT TO MY ROCK?