Bronwyn’s homework assignment was finished and we were champing at the bit to move on. Pindimara was even growing roots, and I spent one morning scrubbing them off. We had enjoyed our stay in Iluka and had had some fun times with local people here and there and our friends on Pelagic, but it was a relief to catch the morning tide and sail across the bar and out into the open sea. It was a bonus to do it under a clear blue sky over glassy smooth water virtually unruffled by the perfect breeze.

The day continued as fun as it started. We were close-hauled and doing 5-6 knots, even managing to hitch-hike on a couple of the mystical ‘reverse currents’ that run sporadically and unreliably up the coast here. Pods of dolphins passed by, heading south. Fighter pilots flew training circuits around the boat, and one even waggled his wings at Bronwyn when she waved. The sun shone. We smiled a lot. 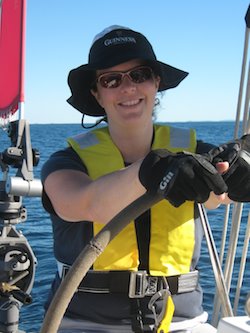 As evening fell, we found ourselves sailing across a wide bay south of Ballina. The off-watch prepared food, each according to their ability. I made Bronwyn a peanut-butter sandwich. She made me a warm chicken and cous-cous spinach salad.

Bronwyn went to bed to get some rest before the night passage, and I started to put in some long tacks to get around the Ballina headland. Out there in the deeps, my old enemy the Eastern Australian Current was lurking, robbing me of two knots and making the easterly tacks pretty hard to judge. For about half an hour, I’m pretty sure that I made no progress at all.

Still, there was a lot to be happy about. I was sailing again, and I’d just finished – thanks to Bronwyn – an excellent supper of home-made meatballs with freshly baked sourdough bread, hot out of the oven. An orange sliver of crescent moon sank slowly beneath the sea. I turned down the lights on the cockpit instruments and lay back on deck to admire the stars. The sky was packed with them. Not just in the Milky Way, which was gloriously spectacular, but also from horizon to horizon I was hard pushed to find the smallest patch of empty black sky. Both of the island galaxies were there, and big fat shooting stars were dropping from the north.

There were stars in the sea, too. Phosphorescent micro-organisms were being churned up in our wake, leaving a line of bright fairy lights in the water on either side.