The guys at the Noakes shipyard were able to fit us in on Monday morning, and since we’re not expecting the southerly that is our ticket out of here until Thursday, it all fits in beautifully with our plans. The holding tank was a quick and simple job. Naturally, as soon as we had Pindimara out on the hoist, it was immediately apparent that a few more things needed doing. Despite the recent antifoul paint job, we had a good inch of coral which had grown while she was sitting still back at Gibson marina, and I suddenly noticed that when the Bayview marina guys had antifouled our hull, they had neglected to paint the saildrive, which was by now down to the bare metal. Not impressed! But needless to say, Noakes sorted it out.

While all this was going on, we had popped into a local bar for a drink. Our new budget certainly doesn’t run to foreign beers, but we allowed ourselves just one premium $10 German beer on the waterfront, and then we’d head to the RSL for a coldie and a schnitzel (non-Australian readers probably should just ignore that. You don’t want to know. Trust me).

But then it magically happened to be Happy Hour, and it would have been rude not to. And then we met Evie, who had a similar story to ours, to whit she had just left her high powered job to run away to sea, and the evening just seemed to get better.

By the time the Noakes boys had fitted the head tank and attended to all the other little tasks, it was time for them to go home and we were nicely sozzled, so we just stayed tied up inside the lifting cradle and spent the night there. 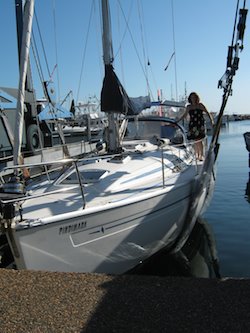 PINDIMARA ON THE LIFTING CRADLE

On the morrow, I was up bright and early and motored out of the marina to find us a new anchorage, while Bronwyn slept on. I tried a few places, but there was quite a bit of swell, and eventually I just dropped the pick in a channel while we had breakfast and decided what to do next. While we chatted, a northerly blew up and our anchor started dragging, so we hauled it up and used the wind to get to Fame Cove, deeper inside the Port Stephens area. 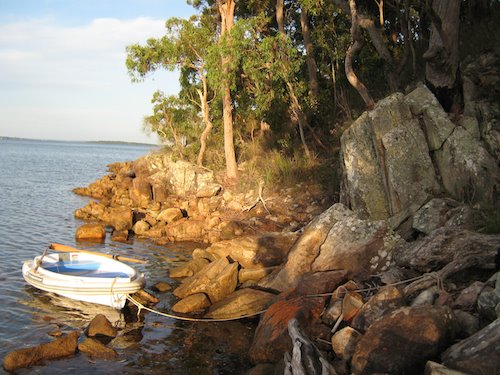 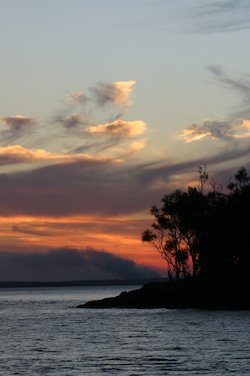 FAME COVE AT DAWN AND DUSK

It really is a lovely spot, and we spent a couple of great days working on our schoolwork. Yes, really! I’m sure that my previous university studies would have gone much more smoothly if I’d been able to do them moored in a private little bay in the sun. Be that as it may, I also took the opportunity between swims to refit a few instruments that I have been “repairing” for the last couple of years, one of which was at the top of the mast so I got to try my snazzy new tool belt, which Bronwyn bought me to stop me from dropping my tools over the side. 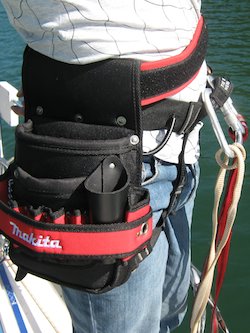 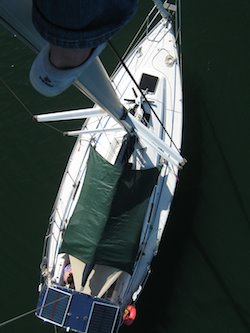 HAVE TOOLBELT, WILL TRAVEL

The only down side to Fame Cove is the incredible number of house-flies. Our boat is full of them! We can’t figure out what they’re after; they ignore any food that’s laying about, they don’t seem to be interested in water. The only common theme is that whenever Bronwyn opens her MacBook, they all swarm over and sit on the screen. Very strange.

I turned on my telephone, and everybody else seems to have remembered that it was my birthday. Which is great, because I had completely forgotten.