A fast run to Hamilton Island to pick up Mikayla, with whom we will spend the next week circumnavigating the Whitsundays. Conditions were a bit gnarly, with washing-machine swells and 30 knot gusts, but it meant that we got to Hamilton pretty quickly and picked up the biggest mooring rope from the biggest mooring buoy we have ever seen. The rope was so big that it wouldn’t fit around our deck cleat, so I had to quickly make an extension for it.

The moorings are on the opposite side of the channel to Hamilton airport, up against neighbouring Dent Island, and the wind was still blowing nicely. It was a bit of a wild ride across the channel in the tender.

Wandering around waiting for the plane, I was bemused by all the holidaymakers decanting from nose-to-tail flights and piling into golf carts. There were golf carts everywhere! When Mikayla had arrived and we were walking back to the marina where I had tied up the dinghy, we were passed by streams of them on their way to their hotels. We got some strange looks; it’s the Club Med set, and they obviously don’t get many pedestrians in Hamilton.

The water in the channel to Dent Island was still running pretty fast on the way back and we got a bit of spray into the dinghy, but the scariest thing was watching Pindimara bucking around and flinging from side to side in some huge surf. Now we could see why they’d over-engineered the mooring buoy. Poor Bronwyn was inside trying to cook lunch.

On the way over, we’d noticed that one of the smaller free public buoys had become available, and that the water was much calmer mid-channel, so we let go our marina buoy and motored over to the other one, not only making everything so much calmer, but also saving ourselves an overnight fee.

But… there are two ways to construct a mooring buoy.
One is to attach a rope to a heavy weight on the bottom. At the free end of the rope, you attach a small plastic floating ball. In order to moor, you pick up the floating ball and bring it aboard, tying it off, and thus attachig the yacht to the heavy weight on the bottom of the sea.
The other construction method is to attach a large floating buoy to the end of the rope, and then to attach a second rope to the top of that buoy. In order to moor, you pick up the end of the top rope and bring it aboard, but the buoy stays in the water.

The first method is simple, effective, has few parts and is trouble-free. The second method is more complicated to build, and if there is any tidal flow at all, then the big buoy will spend at least a third of any 24 hour period banging against the hull. Naturally, almost every public mooring is of this second type.

I spent much of the night at Hamilton Island fending off the buoy and creating ever more ingenious cradles of fenders and ropes as it repeatedly smashed into our soft fibreglass hull with thunderous booms. Every now and then the whole buoy vanished beneath the surface and scraped its way laboriously along the bottom of the hull before popping up on the other side and starting to bang there. Stupid thing. It is quite possible to hate an inanimate object. 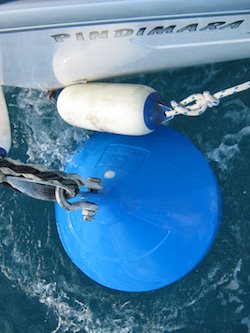