It was a working weekday morning. Usually when we’ve been out beyond the heads it’s been a weekend or a public holiday, and so it was a slightly eerie feeling to make it all the way through Pittwater and out to sea without seeing a single other boat.

On the other hand, we had plenty of animal company. We surprised a gannet asleep on the surface with its head under its wing, and sighted some others drifting in formation high above the mast. Petrels skimmed the surface all around, scooping fish from the water, and the occasional pelican soared regally past.

Down in the water, we spotted a good number of my favourite jellyfish. I haven’t been able to find out what they’re called – or even find any reference to them in the literature – but they’re common near Pittwater. They’re a good 20cm or more long, thick and chunky and yellow, and look like something out of Star Trek. Like many jellyfish, they’re also very curious, and will come and bump on the bottom of the boat to see what you are. 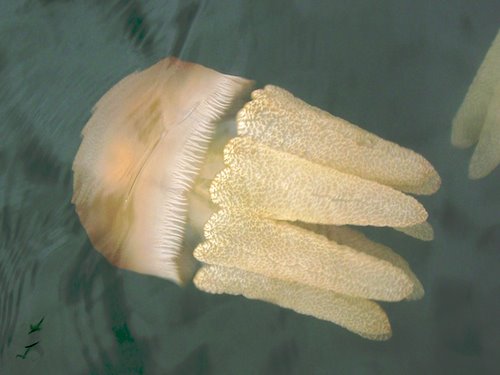 A few hours further on, we were joined by a couple of pods of dolphins, who put on a display for Bronwyn as she stood in the pulpit, jostling with each other to see who could dive closest to the bow, and rolling and surfing in the swell. The scars on their backs show that they must occasionally get too close to motor boats, but they obviously enjoy it too much to stop.

The day passed in pleasant conditions. The last time we’d been here, there were more than forty bulk carriers queued up to get into the coal port at Newcastle, but it looks like the backlog has cleared because there were only half a dozen or so waiting now. As the sun set rosily over the coast, the carriers all lit up like small towns, and Bronwyn went below to rest.

Night fell, and we put in a reef and began to take watches. We don’t really keep a rigid watch system on Pindimara. One of us is awake and the other is asleep, and we switch when we’re tired or when something interesting happens that means that we both have to be on deck. For the remainder of the night, we slept turn about for two or three hours at a time.

Usually on a passage we sleep in the sea berths, which are the benches in the main cabin, but we haven’t fitted any lee-cloths yet and so there is always the feeling that you’re going to roll off onto the floor. On one of my off-watches I chose to sleep in the cockpit with the milky way wheeling above. The night was crystal clear, and there were so many stars that the familiar constellations were all but drowned out in the pointillist background. On one off-watch I decided to try sleeping in the fore-peak, which is our usual master cabin when not at sea. We had recently replaced the original hard foam cushions with blocks of latex, beautifully covered by a local sail maker. With the boat corkscrewing from side to side, I found that the latex bounced pleasantly with each swell, and I quickly fell into an easy sleep.

We enjoyed excellent although rather light winds most of the way, never attaining more than three or four knots, along with a couple of hours of intermittent motoring when the wind died completely and we were getting slopped about in the swell. When morning came, we shook out the reef and sailed up to the Port Stephens lighthouse, avoiding the reefs and aiming for the large and easy entrance to Nelson Bay to our north west. It was at this moment that the forecast nor’wester came in, blowing straight out of the heads, and so we took down the sails and motored in. Behind us, the first of the fishing trawlers followed us in with their catch, surrounded by clouds of hungry seagulls. 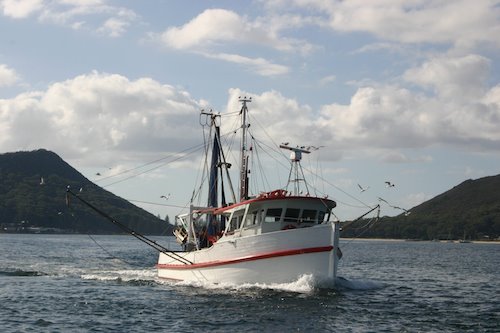 It was eight in the morning, and we’d been at sea for twenty-four hours. Hardly a world-beating passage, but very enjoyable and a good shakedown.

We popped into the Noakes shipyard to discuss some work that we needed doing, and then went around the corner to Salamander Bay, where we dropped anchor in pleasant surroundings at the edge of a marine reserve.

3 thoughts on “Pittwater to Port Stephens”