The anti-swell kedge-anchor worked! We had a beautiful undisturbed nights sleep, while the other yachts in the bay were obviously rolling badly.

Strong winds were forecast for the next few days, but they looked like reliable trades and we thought that we could quickly run the hundred mile trip to Townsville in a night and a day. We set off optimistically in light morning breezes, expecting things to pick up later. The sou’easter stubbornly refused to materialise, and we spent a couple of hours drifting along marvelling at the orange bloom on the turquoise sea. 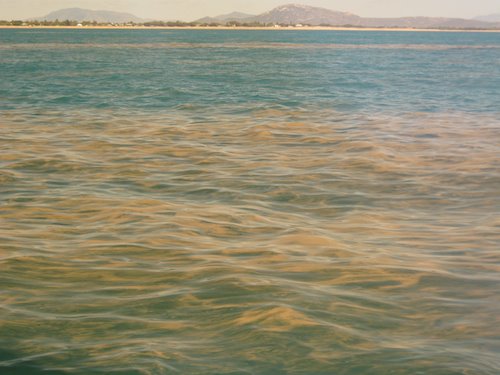 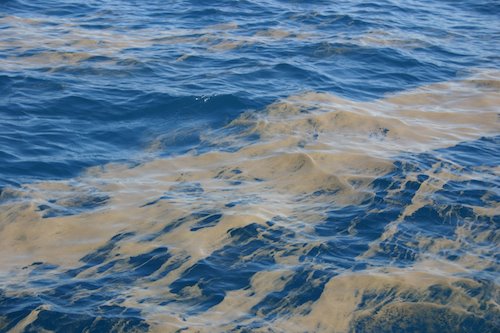 CLOSE UP AND PERSONAL

According to some news reports (thanks, Virginia) these particular blooms are caused by Trichodesium and Townsville is waiting in some trepidation for their arrival, as it seems that they wash up on the beaches and start to rot.

Eventually our speed tailed off to less than three knots, which is our usual sign to reluctantly start the motor. After this, we made good time until late afternoon, when the wind finally started to blow, and we hoisted the sails and were screaming along at 6-7 knots. Thinking idly about dinner, I unwrapped our brand new trolling line (replacing the old one that mysteriously snapped) and began to unwind it overboard to see if we could snare our second ever fish. The spoon had barely hit the water when the reel was nearly snatched out of my hand, and before very long we’d landed another mackerel.

By the time we’d filleted, cooked and eaten it (yum) the wind had died again and we were becalmed. The promised gale was clearly somewhere else entirely, and we didn’t have enough fuel left to motor all the way to Townsville, so rather than bob around in the dark we dropped the anchor in four metres of water in Shark Bay, under the lee of Cape Upstart.

With seven times rode out and an anchor alarm, we settled down to some schoolwork before being distracted by some loud splashing outside. Shoals of Long Toms were leaping out of the water around the boat, and we found that we could trigger mass flights by shining the spotlight onto them.

Tired out from all this excitement, and hoping for wind on the morrow, we went to bed and drifted off to sleep.