Mooloolaba is a very curious place. From the road it looks just like a standard eastern seaboard town, with malls and surf shops and miles of perfect beach. Arriving by yacht gives you a different perspective, because the best place to drop an anchor is in the sea canal at the end of the harbour, which is an extensive network of artificial sandy channels lined with millionaires’ mansions, each with one or two yachts parked at the bottom of the garden. It’s like a cross between Venice and Florida. 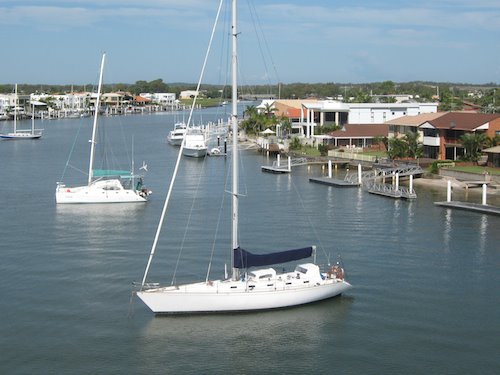 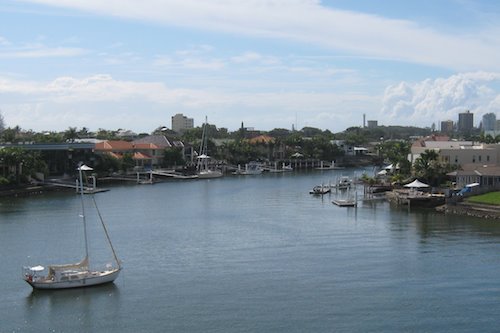 MOOLOOLABA CANALS FROM THE TOP OF OUR MAST

We have stopped here for a while to do a little maintenance. Nothing major, but the masthead anchor light needs replacing, the water maker has a suction problem, and we are still badly in need of a replacement joker valve for the toilet. This latter has been annoying to us for quite some time, because we’d previously bought a cheap unbranded valve from Whitworths (ten dollars instead of near eighty for a full Jabsco service kit that contains lots of other parts that we don’t need) and have regretted it ever since, because the inferior quality of the valve meant that old sewage slowly gets backwashed into the toilet bowl until it fills up. You can imagine what then happens when the toilet bowl gets sloshed around in a seaway.

There are quite a few chandleries in the Mooloolaba area, and we’ve managed to source all of these bits and pieces (including a genuine $35 Jabsco joker valve! Hurrah!) as well as some new toys, such as running lights for the tender. I even managed to source a couple of oil filters for the engine, which have been mysteriously like gold dust all the way up this coast. 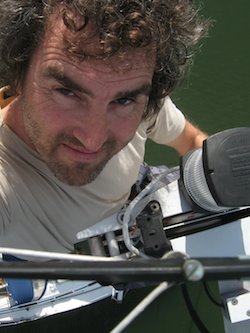 The shops and services are widely spread around the canal system, and I’ve been really grateful to have the new outboard motor because it would otherwise have taken me half a day to row from one end to the other and back. It also gives us a chance to gawp at all the mansions and yachts as we trundle back and forth.

After a few days of working on the boat and on schoolwork, we got a little stir-crazy and looked around for something a bit different. As luck would have it, we happened on an advert for the Sunshine Coast Brewery, which is tucked away on an out-of-town industrial estate. A local bus driver took pity on us, and made a little diversion and dropped us off at the entrance to the park, which was a lovely thing to do and typical of the people who we meet every day here on the Queensland coast.

The brewery produces a great selection of European-style beers (we were particularly stunned by the Rye ESB and the Hefeweissen), plus some interesting variations on alcoholic ginger beer. We got chatting to Greg, the owner, and had a grand afternoon tasting all his excellent ales, after which he joined us in one for the road and took us back to town. A top man with a top brewery. 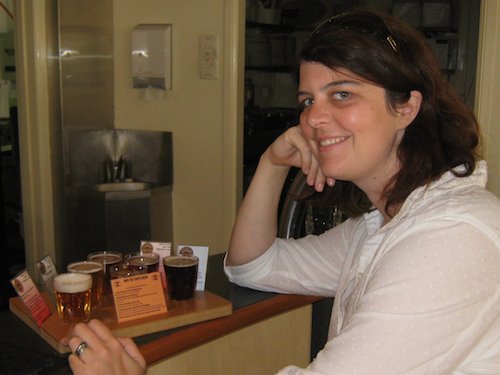 BRONWYN CORNERS FIVE BEERS AT ONCE

After we’d manhandled our case of beers out to the yacht, Bronwyn decided that she was still thirsty, so we took the dinghy back to shore and made our way to one of the local pubs where the beers were far inferior but we had an entertaining time drinking with some locals and watching people falling over and being bounced by the door staff.

The next morning I was feeling just a touch under the weather, so we made our way to the beach and took it easy. 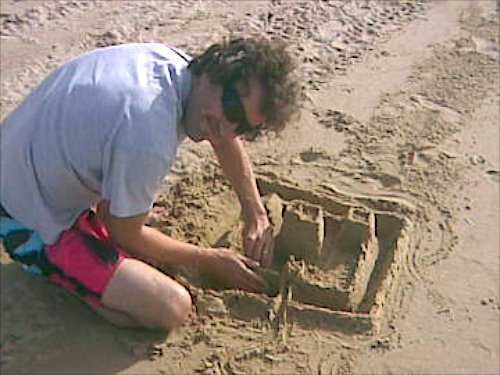 THE MASTER BUILDER AT WORK

Mooloolaba beach was very pleasant, and the water was calm and shallow and we were very glad to finally do some swimming. We’ve been conserving fresh water on the boat and haven’t fancied a dip in the murky canal water, so we’ve been feeling pretty dirty and it was good to get clean.