We had intended to move on from South Percy Island the next day, but the forecast was for a light nor’wester and our route was to the north west. Tacking for hours into a light wind held no attraction, and we didn’t really have enough fuel to spare to motor it, so we decided to stay another night at South Percy. With only light winds for the previous few days, I had become a bit complacent about the weather. Although I knew that the nor’wester would blow right into our little bay, I just assumed that it would maintain the same negligible wind speed that we had become used to, and in this assumption I was supported by the GRIB file that I had downloaded (via satphone: no internet out here) that showed a predicted wind strength of a barely perceptible 3 knots.

As the evening wore on, the nor’wester began to blow a good 10-15 knots and brought with it an uncomfortable swell. By the middle of the night we were being thrashed around as Pindimara bucked like a bronco, being held side-on by the tide to an ever-fiercer north westerly swell.

We decided to wait til dawn and then run for cover in Whites Bay, a SE-facing shelter under nearby Middle Percy Island. In fact I was up well before dawn, washing up and generally tidying away, so that by the time it was light enough to see, we were ready to go. The sideways swell was getting really rough, and it wasn’t possible to stand upright without hanging on.

Whites Bay was only a few miles to the north, and we could see that there was a single yacht already at anchor there. When we were about half way across, a whole stream of yachts appeared around the south western corner of the island, all heading in our direction. We guessed that they had been caught out by the wind change while anchored on the western side of the island, which is the usual tourist destination because of the world famous “A-Frame” cruisers’ meeting place on the shore. This was later confirmed by Jace on Eveready who said that there had been a bit of a sundowner at the A-Frame the previous night, and by the time they’d all got back to their boats, the wind had already changed and nobody felt up to moving on. 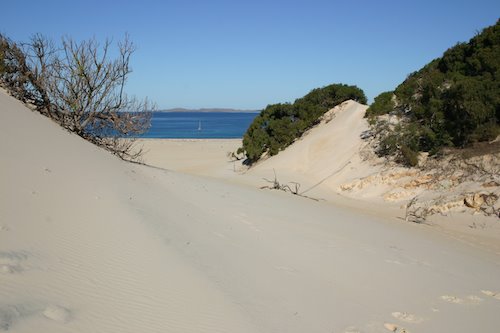 Once we had all anchored, Bronwyn and I went over to the shore for a walk. There was a dune which I inevitably climbed, and which proved to have an interesting crust a few metres from the top where the steep surface had been hardened to the consistency of concrete before being lightly sprinkled with fresh sand. Very slippery.

IT’S A LONG WAY DOWN

We didn’t explore very far into the island, though, because we intended to go to bed early and leave in the middle of the night.