After picking up Patricia from Townsville airport, we sailed across to nearby Magnetic Island for the weekend. Captain Cook named it “Magnetical” because he believed that it was affecting his compass, but it seems that he was mistaken. This can happen to the best of us; see for instance this harrowing tale from the extremely experienced crew of our friends on Pelagic.

The island may lack magnetic anomalies, but it does have some beautiful bays and walking tracks. The best anchorage is in Horseshoe Bay to the north, offering good protection from the SE trade winds, so we dropped anchor there for a few days while we explored. Although it was a busy bay, there was plenty of room for all, and there was no appreciable swell despite continuing strong trade winds. 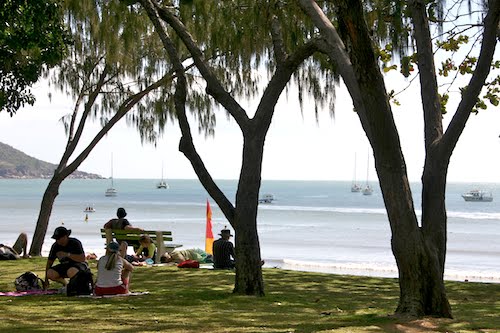 A couple of thousand permanent residents are scattered around a number of small settlements connected by a circular bus route. Apart from one notable exception (a younger chap presumably new to the job), the bus drivers tried to make the route more interesting by keeping the accelerator pedal firmly to the metal at all times. They would maintain power until a few metres short of a bus stop, whereupon they would stamp heavily on the brake. Passengers quickly learned that it was necessary to wait for the bus to stop bouncing on its springs before daring to stand up to get off.

The other mode of transport on the island is the Mini Moke. I had no idea that there were so many of them left in the world, but this may be because they are all now collected in this one spot. Most are for hire, fulfilling the function of the golf cart on Hamilton Island, being usually piloted by slightly inebriated tourists making their way home from the pub. 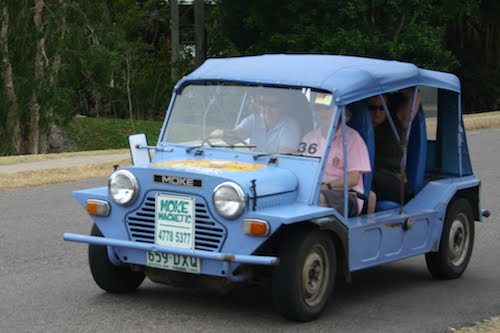 WHERE THE MOKES WENT

Tourism is the only industry here, but Magnetic (‘Maggie’ to its friends) has escaped the resort frenzy that has claimed Hamilton. Most of the accommodation is low key and comprises individual houses or cabins rather than hotels. The ferry to the mainland is the island’s lifeline and the key to its prosperity, as can clearly be seen in Picnic Bay which used to be a thriving commercial quarter but which is now largely a ghost town because the ferry terminal moved around the corner to Nelly Bay.

There are no such problems at Horseshoe Bay, which is the jewel in the crown and whose few but excellent beachside bars are presumably adequately serviced by visiting yachties. The Barefoot cafe and art gallery is particularly relaxing, and an honourable mention must go to the ‘Noodies’ Mexican restaurant next door for the opportunity to sit margarita in hand while watching dugongs in the surf and people messing about on the beach.

MESSING ABOUT ON THE BEACH

The island also boasts a number of easy walking trails. Perhaps the most spectacular is the Forts Walk which hits you with a triple whammy. Firstly, the views of the surrounding shorelines are superb. Secondly, the path takes you up to a historically interesting WWII gun emplacement, and lastly the trail is lined with koalas. 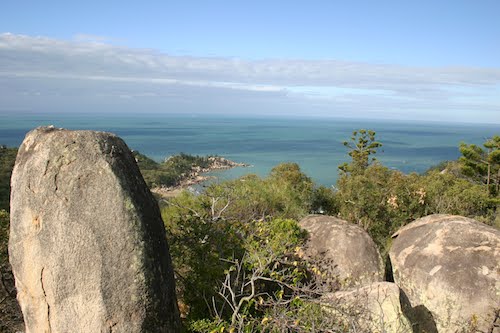 We were sad to leave Horseshoe Bay when it was time to take Patricia back to the mainland, but the weather co-operated to give us perfect sailing conditions back down around West Point to complete our circumnavigation of the island. 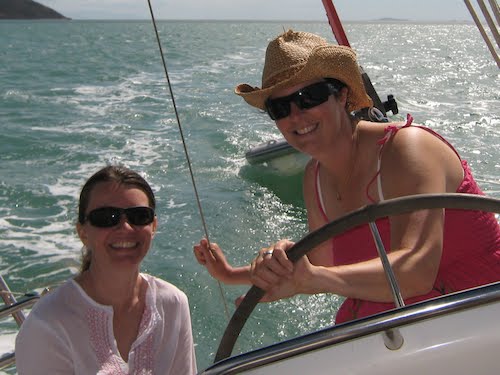 The Breakwater marina notwithstanding, we had thoroughly enjoyed our initial impression of Townsville itself, and wanted to stay on a bit longer when when we brought Patricia back to town. We decided to try out the Townsville Motor Boat and Yacht Club marina, which is down Ross Creek in the centre of town. Access is via the commercial harbour shipping channel, so we nipped in ahead of an incoming bulk carrier and found good depths all the way.

After the usual hunt for our berth, we tied up to a warm welcome by Mark, the marina manager, who called a taxi for Patricia and went out of his way to make our stay as enjoyable as possible. The pontoons were all sturdy and new, the club’s facilities were being completely refurbished, there was a lively bar on site, the other marina residents were universally friendly and interesting, and to top it all the berths were considerably cheaper than at Breakwater.

Leaving Pindimara in safe hands, we happily set off to explore the town.