As the sun rose above the loading docks, we slipped quietly out of Gladstone. There are three routes out of Gladstone Harbour. The main shipping channel to the south – the way that we had come in – would be quite a dogleg for a northerly trip. The Narrows is a shortcut direct to our destination of Keppel Bay, but is dominated by a six mile drying stretch called the Cattle Crossing and you have to be absolutely sure that not only will the tide give you enough depth to get through, but that you have enough power to fight the tide all the way to the other side before the water disappears again. We chose the Northern Passage, a middle way, saving us about 20 miles on the shipping channel but with only a short drying area right by the bar.

Since the drying area is at the far end of the channel, we had to time our trip up to cross the bar at high tide. This meant that we were fighting the incoming tide all the way, but luckily it was only running at a knot or two. We were motoring up at about half tide, which was just enough to cover the sand banks and reefs. We had the somewhat surreal experience of navigating up thin unmarked winding channels that we could see on the chart, but to the naked eye we were zigzagging meaninglessly across an apparently unobstructed lake of unbroken water.

Bronwyn was steering, I was navigating down below.
“Thank goodness for GPS” I thought as we approached a particularly thin section. Just then, something crashed and we lost all our navigation systems. Great. I called course headings up to Bronwyn from memory while frantically changing batteries in the GPS and rebooting both computers, one as backup in case the main one didn’t recover. Everything came back online just as we needed to do a sharp turn to avoid another invisible sand bar. The computers behaved from then on but, thankfully, we had now entered a marked ferry channel and the leading lights took us between a couple more reefs and out into the open sea.

We were free! We grinned like maniacs and rushed to put the sails up. Gladstone wasn’t a bad place, but it had hung over us like a black cloud because we were forced to stay there. The freedom that we’d started to take for granted had disappeared, and the lack chafed our souls.

No matter. We’d done what needed to be done, and now we were on the move again.

It was one of those perfect sailing days. We were close hauled and flying along at 6-7 knots, but the sea was calm and smooth and so it wasn’t uncomfortable at all, just pure fun. We chose to steer manually all the way.

We could take advantage of the NW winds all the way up the coast, but we knew that the final westward section toward Great Keppel Island was going to be a long hard beat into wind. Halfway through the day I fired up the computer and downloaded the GRIB files for the next three days. Technology to the rescue! GRIB files are meteorological data that can be overlain onto a suitable digital map. In this case, they showed that at about four in the afternoon we could expect a westerly change, and then another one to the south-west in the evening. This was perfect! It meant that rather than taking lots of time to tack back and forth, we could just gently curve around with the wind until we arrived.

And that was exactly how it happened. After 13 hours and 58.6 miles (an average 4.5 knots, much of the latter part against an evil 1.5 knot current, so the boat was really travelling much faster than that) we dropped anchor under the Milky Way and a crescent Moon, next to Second Beach on Great Keppel Island.

After a restful sleep – how wonderful to feel the boat rocking beneath us again! – I stood on deck under the rising sun and marvelled at the blue sea, the blue sky, and the peaks, beaches and islands scattered around us. What a beautiful spot.

We had intended to spend the next day hiking over the island, but first I had to repair the electric anchor winch which had given out the night before. I quickly traced the fault to a lazy wiring job at the sharp end; I mean, if you were a marine engineer installing a wiring connection at the end of the boat that spends a lot of time immersed in sea water, wouldn’t you try to waterproof it a little? Apparently not. Luckily I had my trusty gas-powered soldering iron and spliced in a new section. 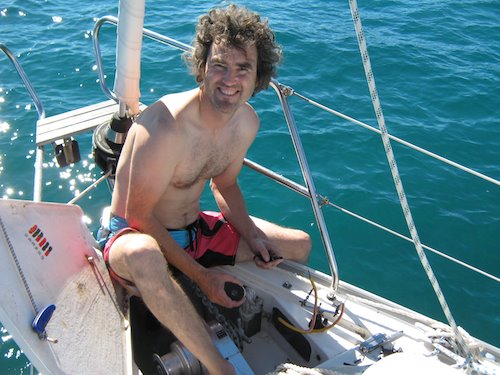 Standing on the bow, we realised that the water was so clear that we could see the anchor. This reminded us that we hadn’t been swimming in ever such a long time, so we decided to snorkel over the reef at the end of the nearby beach instead of going for a hike.

Since we’d arrived at night, we had anchored a prudent distance from the invisible shore, and daylight revealed that we were a good 600 metres out. We donned masks and fins and set off. Half way there, Bronwyn got stung in the face by a jellyfish, but after that things started to look up.

At one end of the beach is a secluded clearing marked by a rather bizarre sculpture consisting of forty or more beach-combed floats and buoys suspended with string from a large tree. Next to it is an unusual swing and an enormous hammock fashioned from a fishing net. We spent some time lazing in the hammock in the sun, chatting idly about this and that, before putting on our fins and splashing out to the reef.

It was less a reef and more a collection of rocks fallen from the island, but it was home to as relaxed and varied collection of fish as you would find on a scuba dive. We spent a happy few hours paddling around before beginning the long swim back to Pindimara. Just as we set off, we were passed by a shoal of pike barracuda each almost a metre long. Spectacular.