Usually when we need to stay at a marina, we rent a swing mooring and commute to land by dinghy. A mooring is usually cheaper and more private than a berth, but still allows you access to the marina’s showers, laundry and other facilities. It lacks a fresh water tap and shore power, but those are not things that we regard as at all important, being largely self-sufficient with our large water tanks and wind and solar generators.

On this occasion, though, our greatest concern is revising for and taking our exams. Mine are conducted online, so I use my computer at the local library, but Bronwyn has had to arrange for an invigilator at the nearby campus of the University of Central Queensland. To make it all easier, and to ensure that we have the necessary power for late night study, we have committed ourselves to three weeks plugged in to a marina berth. 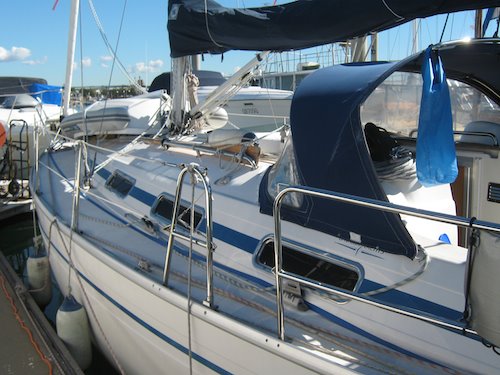 PINDIMARA SULKS ON A BERTH

Gladstone Marina is operated by the Port Authority, whose main job is to handle the freighter traffic servicing the local coal loader, smelter and gas plant. The marina is overshadowed by the coal loader which continually lays down a thick layer of black dust while beeping loudly to let you know that, even though you might have gone to bed, they are still working. The marina is also in the middle of a refit, so there are labourers disassembling and reassembling the pontoons to the sound of power tools and local radio, backed by a loud and smoky dredger running at all hours of the day and night. 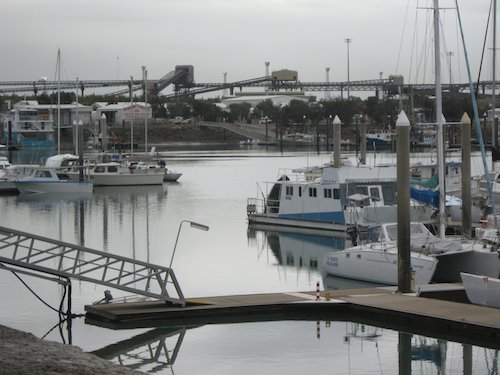 THE MARINA AND COAL LOADER

Where there is a marina, there is usually a sailing club. On the whole, we’ve been completely unimpressed with all the sailing clubs that we’ve visited so far, but we persevered with the nearby Port Curtis Sailing Club. In their favour, they poured Guinness in pint dimple jugs. Actually, that’s probably the only thing in their favour. The beer was poor and overpriced, the interior lacked any kind of atmosphere, and we didn’t manage to engage anybody in conversation at all. The food was… perhaps I should merely draw your attention to the sign in the gents lavatory. While extolling the advantages of paying your club membership fees, this poster tantalisingly exhorts: “Your membership entitles you to discounts at our infamous restaurant”. Enough said, I think.

We had a far better time at some of the local pubs, particularly at The Grand Hotel, which is always friendly and welcoming. One night we found ourselves drinking there with some coral trout fishermen celebrating their return from a four-week stint, who later took us to The Queens, which we had previously avoided because of its unprepossessing exterior but which turned out to be a lively and fun local haunt, full of interesting characters. I was also served one of the best steaks that I have eaten in Australia. It actually came ‘blue’ as ordered, and I could cut it with a fork. Superb.

I joined the locals that night in their tipple of choice, Bundaberg rum and coke, after which it all got a bit messy. Much, much later, Bronwyn and I set off on the kilometre or so walk back to the marina, and somehow got completely lost, even though the town is only a few minutes across. Luckily Bronwyn flagged down the driver of a passing petrol tanker, who took pity on us and drove us home.

Most of the boats here at the marina are long-term liveaboards. This doesn’t mean that there are lots of cruising sailors to talk to; on the contrary, it’s more like living in a waterborne trailer park. Most of the denizens seem to live on enormous self-built trimarans, all trailing great strands of coral and mussels testament to their complete and permanent immobility. 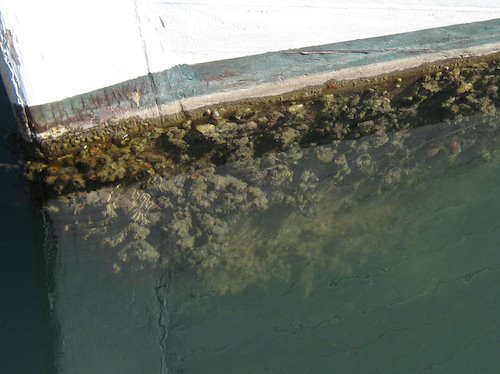 PERHAPS THEY ARE STARTING A CLAM FARM?

I’D BE FASCINATED TO SEE HOW THIS RUNS

While hosing off a couple of weeks of coal dust from Pindimara’s deck this afternoon, I noticed that even our neighbour’s inflatable dinghy had nearly a metre of coral beard hanging from its underside.

While waiting for service at the sailing club, I idled away some time by reading their notice board, even perusing the race standings (it was a very long wait). I have now seen most of the boats listed, including all those with high handicaps, and almost all of them are trailing festoons of coral and shellfish. I’m not sure exactly who is kidding whom. 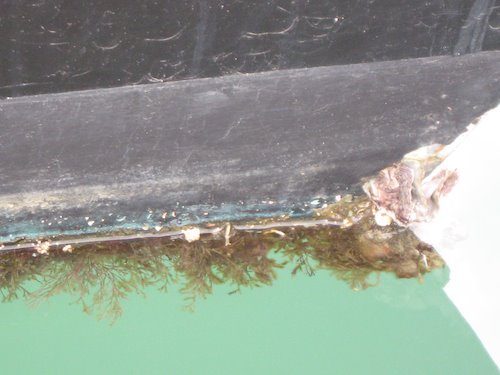 THIS YACHT IS HIGH IN THE CLUB STANDINGS

We’re here in Gladstone for a very specific reason, but I must admit that life at the marina is slowly driving me stir crazy. The rhythm of our day has all changed. Because we have permanent electrical power, we no longer go to bed at dusk and wake at dawn. Instead, we laze around in the evening watching videos and reading books, and wake up whenever our neighbours start to make too much noise in the morning. I’ve also lost touch with the weather. Usually I feel in tune with the boat, waking reliably whenever the tide changes or whenever there’s a change in the wind. At sea, at anchor, or on a mooring, the boat feels restless when there’s a change in the air. Here at the marina berth, I have no idea what is happening out there. The wind gusts or the sun comes out with no warning, and I feel disconnected. Hah, listen to me. We’ve only been at sea for three months, and already I sound like a hoary old sea dog.

But the exams are going well. Only one more week to go.