Overnight the wind changed, putting us on a lee shore, blowing over 20 knots with a following 3 metre swell. Obviously we should have noticed and changed anchorage, but we were sleeping the sleep of the just and didn’t notice that our anchor was dragging. The first we knew about it was the sound of our keel impacting the ground , not something that I ever want to hear again, although I was to hear it many times that night.

I tried to reset the dragging anchor, but found that it was wrapped in a blue nylon and rubber sheet, presumably somebody’s discarded wet weather gear which had caused it to slip. We were by now wedged on the muddy bottom alarmingly close to shore. After running uselessly at full throttle – we weren’t going anywhere – the engine overheated and had to be shut down. A quick check revealed that the seawater coolant tubes were dry, presumably mud had clogged the sail-drive intakes. The night was pitch black. The depth sounder was reading 0m under the keel. The GPS showed that we were 600m from where we had originally anchored.

I started to kedge, which means that I carried our spare anchor out in our dinghy, with waves breaking over my head, dropped it somewhere vaguely close to where I wanted us to be, and then climbed back on the yacht to haul us along the anchor rope by hand. Then repeat. It’s back-breaking work, and after moving the yacht a little over ten metres, we stuck fast and I could not move us further. I left the kedge anchor in place because it was stopping us from drifting further inshore.

I called for assistance on the emergency Channel 16, but none of the relevant authorities were listening, which was not surprising given that it was the middle of the night. Eventually I was answered by Reef Watch, a commercial organisation related to the coal industry, who passed on our message to Townsville Water Police who passed us on to Voluntary Marine Rescue Bowen. A sleepy VMR crew arrived on a small catamaran shortly after dawn and tried to tow us off, but failed because we were completely stuck.

We agreed to wait for the now thankfully rising tide. Pindimara was bobbing, but seriously listing to one side and slamming into the ground with every wave. Tony from neighbouring yacht Loyalty arrived and coordinated the second rescue attempt, using his own dinghy attached to our masthead spinnaker halyard to drag us even further over until our gunwales were in the water, thus releasing the keel from the mud. Alarmingly for him, his outboard kept cutting out, which meant that Pindimara would stand up and lift both him and his dinghy vertically out of the water until he could get it started again. Meanwhile Matt from VMR and myself worked on the increasingly wet and sloping foredeck to kedge us out on our two anchors while the little VMR rescue boat attempted to tow us out on a line. Eventually we came unstuck, and since our engine was disabled and the local harbour was too shallow for our 2m draft I requested that we be towed to one of the many private mooring buoys in the area.

Through all this time, Bronwyn had been staying out of the way below in the heaving, canted saloon. When I came below with our rescuers to dispense coffee and whisky, we were astonished to discover that she had baked fresh bed for everyone.

Once secure, with the assistance of Tony from Loyalty we cleared our blocked intakes and started our engine. We could engage forward gear but not reverse, so I guessed that we had a problem with our propeller and dived on it to remove several metres of chewed-up rope which was jamming our propulsion. 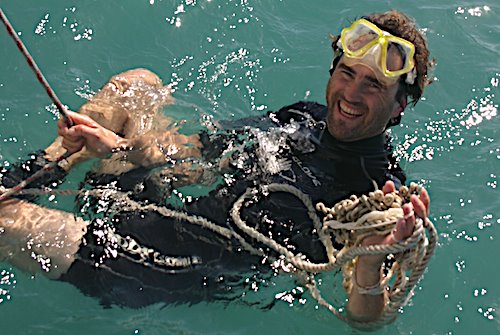 Finally, we seemed to be in the clear. It had been a long morning.

During the process we’d met the crew of not only one, but two nearby schooners, Tony on Loyalty, and Annie and Robyn on Joshua C . 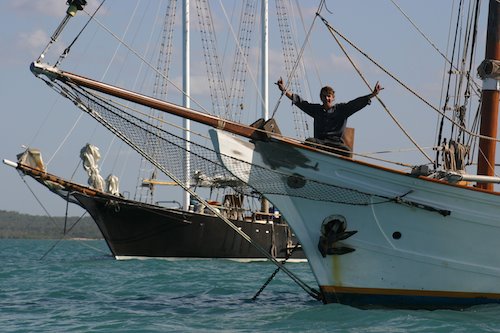 HELPING TO BRING LOYALTY TO ANCHOR

It seemed reasonable to spend the evening celebrating. 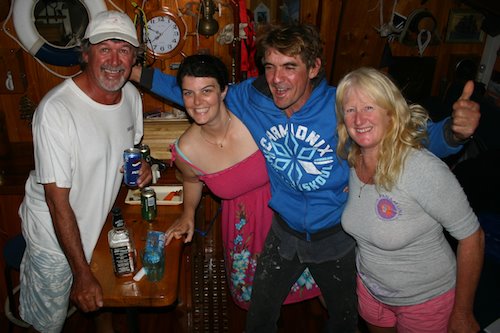