Cape Bowling Green is, presumably, so named because it is as flat as. It’s not really a cape at all, more of a long sand spit enclosing a shallow bay. We had no intention of stopping there, because it’s so flat that it is little use as protection, and because a number of people had warned us that it is a pretty uncomfortable anchorage. 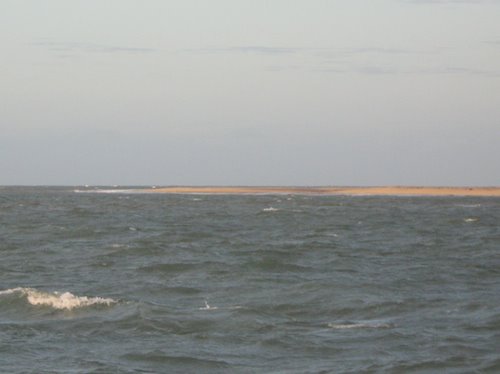 Nevertheless, after a nice day’s sailing before 10-20 knot winds, we found ourselves coming abeam of the Cape with gusts in the mid-thirties and swell that was big enough that we were surfing down it. Clearly last night’s gale was coming back to blow again, and we decided that we really didn’t want to be out in it.

The wind itself wasn’t too much of a problem, as even in 30 knots we were comfortably cruising at 6-8 knots under full sail, but controlling gybes while surfing is tricky enough in daylight, and we didn’t fancy tiring ourselves out at night, especially if the developing swell was going to get any bigger.

We tucked around the end of the sand spit and anchored in 4 metres with plenty of rode and an anchor alarm (we’re learning…). There was nobody else in the enormous bay apart from a couple of humpback whales who were gently cruising around in the shallows. I guess they like to get out of the swell as much as the next mammal.

The wind went straight up over 30 knots and stayed there. Although we were sheltered from the big sea swells, we were still far enough downwind from the sand spit to experience some pretty big waves as they built up across the shallows, and Pindimara began to do a passable imitation of a nodding dog. Still, it was all on the bow and pitching is nowhere near as bad as rolling. We didn’t exactly sleep the sleep of the just, but by the morning the wind had died down enough to move on. The sailing conditions were just about perfect, and we had a wonderful cruise into Townsville.