It was time to embark on our first proper ocean passage. Although we have done many multi-day non-stop passages, we’ve never really been more than 20 miles from land and there’s almost always been some island or cape within a few hours sailing that we could hide behind if the weather turned nasty.

The trip from Weipa to Gove is a 300-mile straight line across the Gulf of Carpentaria, with no islands or shelter of any kind. We already knew from our voyage to Weipa that the weather in the Gulf was very changeable, but although our GRIB files reflected this, there was nothing really nasty in the forecast for the next few days.

We set off up the channel out of Weipa harbour, carefully giving the working dredgers a wide berth, and crossed into the open sea with a good following wind. The water was so clear, and the seabed sand so yellow, that the terns wheeling about our mast became magically green in the reflected light. 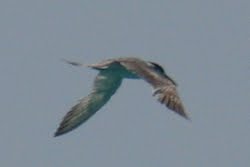 Dolphins came to see us off, jostling each other to get the prime position just under the bow. For some reason, a dolphin’s idea of a good time is to have five tonnes of yacht crashing repeatedly down on his head. Each to their own, I guess. 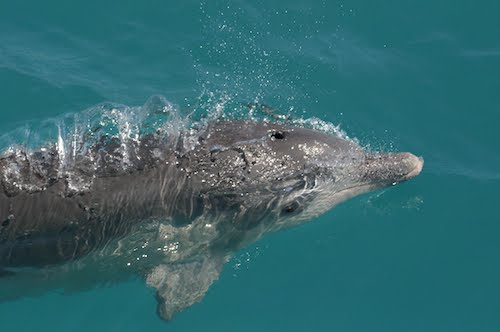 The flat landscape of Cape York soon dropped over the horizon, and we were alone in the blazing heat. The instruments told us that the boat was moving, but there were no points of reference and we might as well have been standing motionless in an eternity of blue. 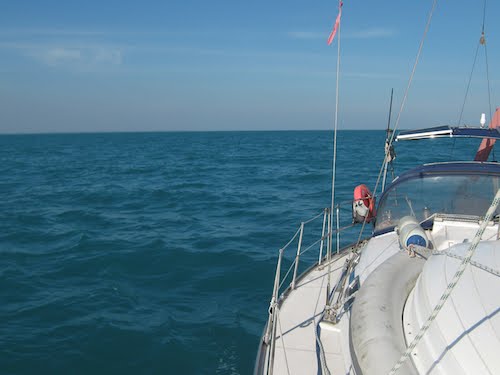 Later that afternoon, the wind died and left us becalmed. We began to take the sails down in preparation for starting the motor, and then noticed a curious rippling in the surface of the mirror-smooth sea. We looked around a little nervously at the clear blue sky. Nothing was visible, but we were very aware of a breathless pause. Something was about to happen.

Suddenly the cockpit was full of insects. Hundreds of them swarmed all over the boom and the Hydrovane sail, and spun in a motley cloud above the targa. I examined the nearest handful and saw that they were small brown beetles. I assumed that we had encountered a migratory swarm, but then Bronwyn shouted “Ow!” as something bit her, and we realised that there were dozens of different species of all shapes and sizes. In addition to the beetles, which seemed to be a kind of grain thrip, there were enormous black and white horseflies, dung flies in yellow and green, a variety of moths, and some big and evil-looking red-headed wasps. There were even some flightless creatures, scuttling ants and spiders.

In short, it looked as if something had sucked up all the insects from a crop field, carried them twenty miles out to sea, and then dumped them on our boat.

Some years ago, I watched small dust-devils sucking up hay and making crop circles in a field in Belgium, and only a few months ago we saw a waterspout that dropped its load of sea water onto Capricorn which was passing by, so I can only imagine that something similar happened here. The sea is surely a very strange place.

No sooner had we swept the nastiest of the insects overboard, then the wind shifted 180 degrees and we were hurriedly re-hoisting the sails to go close-hauled. It was time to go sailing.

For several days and nights we continued, with fair winds and with none at all, with large swell and small, alternately running, reaching and motoring as conditions dictated. We didn’t see a single other vessel. 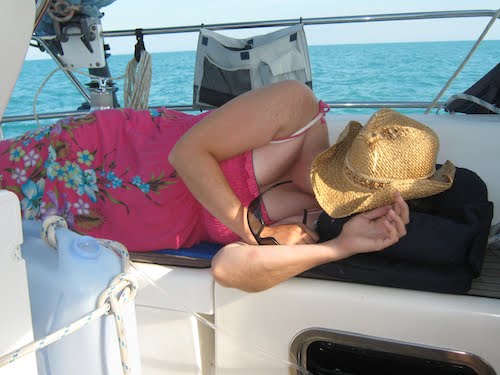 When the wind was blowing, we let Harriet the hydrovane do the steering, except when the wind dropped too much and the size of the swell exceeded the force of the breeze and made the boom slap at the bottom of every trough. Eventually I worked out a way of tying the boom down, which solved that little problem.

The wind tended to die off completely at night. We came to hate the periods of extended motoring, for the following swell demanded full concentration to stay on course, hour after hour after hour. I cursed the Raytheon dealer in Sydney who was supposed to have repaired our autopilot, but who just wasted our time instead. Our problem was exacerbated by the lack of landmarks, so that instead of simply aiming for a cape or a lighthouse we had to stare continuously at the compass, which is a very tiring way of motoring. At night we had a full moon, which was good for visibility but bad for steering because it washed the stars out and gave us nothing to steer by.

When the sails were up, even without the hydrovane the yacht was balanced and we were free to get up and walk around. Under motor, we were glued to the helmsman’s position. Our backsides became raw from sitting on the hard cockpit seats in the rolling sea, forcing us to adopt ever stranger seating positions in an attempt to bring some new part of our anatomy to bear that wasn’t already red and raw. I cut up some foam and made deck cushions, which made a tremendous psychological difference but which in reality only took the edge off the pain.

The third night was the worst. Turn and turn about, our spells at the wheel became shorter and shorter before we had to call down for a change of watch. Repeatedly rousted from less than two hours of sleep, we rested our chins on the wheel and stared at the compass through scratchy, red raw eyes. We were so tired that the boat was veering as much as sixty degrees to either side. Shortly after dawn we gave up, killed the engine and just let her drift unmanned while we both collapsed gratefully into blissful oblivion.

When we awoke, the sun was high in the sky and the sea was a still as a mill pond. We made breakfast and then fired up the motor again.

The day passed slowly, with no signs of life either human or animal. And then – Land Ho! A distant beach shimmered on the horizon.

The shoreline crept closer, until we could distinguish the passage between the mainland and Bremer Island, where aboriginal fires were burning. We’d heard that this was the traditional place for teenage delinquents, who were taken there to re-learn cultural values if they had transgressed against society. If this was still the case, then they certainly seemed to be busy at the moment.

A small yacht sailed out from behind the headland, crew waving cheerily as they passed. Sweaty, smelly, salt-encrusted and weary, we waved back. We had arrived. 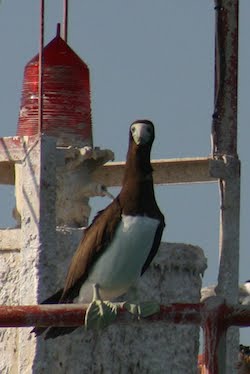 WHERE THE HECK DID YOU COME FROM?