“Taxi? Meter taxi? Let me take your bag….”
Running the gauntlet of freelance taxi drivers emerging from ever-so-dodgy cars outside Pudong Airport, we fought our way through to the official taxi rank, presided over by a smartly uniformed man with an anti-SARS facemask and a clipboard. He was able to translate our hotel address for the first driver in the queue of identical VW Santanas, and we climbed aboard. The driver, sitting in his perspex protective bubble, crunched into gear and launched into the video game that is Shanghai traffic.

Cars and buses swerved in and out, punctuated by sudden pedestrians, bicycles, rickshaws, and randomly strewn warning signs. We had no idea where we were going or what to expect, so we simply sat and watched the world race by until we emerged from the city and crossed the Huangpu River into the business district. There, on the waterfront overlooking the Bund, looking like it had just landed from space, was the Oriental Riverside Hotel.

We’d had a long flight that morning, so Bronwyn had a rest while I wandered out for a stroll along the river. I certainly wasn’t going to get too lonely, because every couple of hundred yards I was stopped by Chinese tourists, apparently visiting the big city from the country, who liked nothing better than to take photographs of their wives and girlfriends with the strange pony-tailed giant who had appeared in their midst. Indeed, westerners were extremely scarce on this side of town, so it was even more surprising that I suddenly happened on a Bavarian bar by the waterside, serving pretzels, bauernfrühstuck, and locally brewed Paulaner beer, including my favourite Dunklerweißer. On a later visit, we found ourselves serenaded in English by what seemed to be a Korean Mariachi band.

Bavarian food and beer on the Bund

It was an excellent opportunity to stop and watch the boats plying the river. Like much else in Shanghai, it was a shock of contrasts, oil tankers and container ships rumbling their way past a backdrop of the Bund and the office buildings of the city centre, sounding their horns as they manoeuvred their way to or from the enormous dockyards downstream. Fascinated by the maritime component of this great city, we booked aboard a tourist ferry which would take us up the river, through the dockyards, and out as far as the confluence of the Huangpu and the Yangtze. Discovering that there was no food available on the ferry, we grabbed a bite to eat in a dockworkers cafe hidden under the pylons of the dock (we just pointed randomly at the menu and got served a very nice meal with a bottle of Tsing Tao beer), and then climbed aboard.

Ore barge chugs past the city

Shanghai in the mist

The towers and skyscrapers of the city soon faded into the heat haze, as we entered one of the busiest sea docks in the world. Everywhere there were container ships and tankers being built from new, or refurbished from the deckline up, tiny figures hanging like spiders over the sides as they worked away at the rust with handheld power tools. And everywhere, darting between the huge hulks and running backward and forward between the docks, little liveaboard boats, each as far as we could see permanently occupied by a family, as indicated by the pots of food plants and the washing hanging out to dry.

Liveaboard on the Huangpu River

Family boat on the Huangpu River

Plying the centre-line of the river, we passed perhaps a dozen little dredger boats. They seemed to be very busy sucking up the bottom mud and raking something out of it, but whether it was edible shellfish or something else, we were never able to discover.

Finally, the ferry reached what appeared to be the open sea, but which was in fact the famous Yangtze, Changjiang or Yellow River, just getting wide and lazy after its long journey all the way across the country en route to the East China Sea.

Bronwyn and the Yangtze

Reinhard and the Yangtze

Back in town, we searched in vain for a Chinese restaurant. Every eatery boasted its French-trained chef and its European menu, and in the end, surrounded by thousands of years of Chinese culinary expertise, we had to settle on French cuisine and New Zealand wine. However, they weren’t going to get away with this every night, so we hunted down a five-star Chinese restaurant which, conveniently enough, was located in our hotel, inside the huge glass sphere that you see on every Shanghai postcard.

It still wasn’t easy, though. As we approached the door, we were firmly rebuffed by staff in beautiful silk dresses, “No no sir, here Chinese food, restaurant is downstair.”

Nevertheless, we battled our way in, to be confronted by an enormous circular room with stunning views over the Bund, acres of plushly set tables, and not a single other diner.

The menu was fascinating. Every dish that I’d always wanted to try, but had been afraid to in fear of being passed off with a substitute. The prices were suitably exorbitant, so it looked like this was going to be the real deal. As the waiting staff peered over each others’ shoulders in amazement, I ordered Birds Nest Soup, and Sea Cucumber in Abalone Sauce.

I was not disappointed. The soup, which should be made from the spit-glued nests of cave swallows harvested by men hanging from hazardous bamboo ladders, had precisely the texture you would expect from boiled saliva. Similarly, the braised sea cucumber came whole and ungarnished, and looked and tasted exactly like the boiled slug that it was. The abalone sauce was excellent. Signing off the equivalent price of a room in this five star hotel, I declared myself satisfied.

In the morning, after picking over a sadly westernised breakfast and trying to shake off our jetlag, we headed for the city centre. Apart from the road bridge, there are two ways of crossing the river; the metro, which is fast and efficient and costs 2 Yuan for as far as you want to go, and the Tourist Tunnel, which is much slower, costs 40 Yuan just to get you under the river, and is… weird.

After buying our Tourist Tunnel tickets from the smiling attendant, we made our way down an escalator onto an underground station platform adorned with quite lifelike virtual fish tanks. After a few moments, a fully automated carriage arrived out of the tunnel, and we were escorted with a flourish into the glass cabin, perhaps the size of a large van. The car started to move, accompanied by electronic music from hidden speakers. Suddenly, a male voice intoned something like “volcanic rocks” in English, and all hell broke loose outside. Strobe lights flashed up and down the tunnel, glowing images appeared on the walls, and the train moved through an ever-changing kaleidoscope of neon colour, each accompanied by a geological phrase and loud music. A few moments later, we emerged on the other side, amused but very definitely baffled. 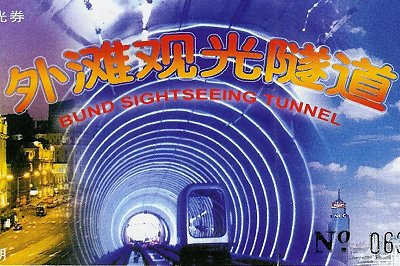 The ticket for the Bund Sightseeing Tunnel 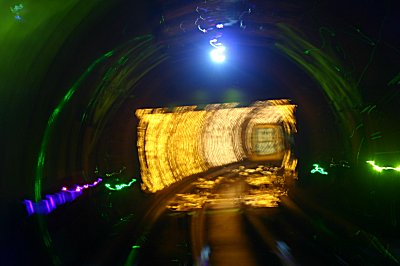 A sad attempt at photographing the tunnel

Shanghai is a city in transition, with rickshaws mixing it with cars in front of the tin shack sweatshops in the shadow of huge international skyscrapers. This can be a little frustrating when you are a tourist, as we found that sites of interest on the map were as often as not represented on the ground with a small sign saying “Former site of…” or “Here once stood….” Mind you, you cannot fail to be impressed by the people who thought it necessary to erect a plaque dedicated to “The former site of the former provisional government of Korea.”

The famous Bund, on the northern side of the Huangpu River and directly opposite our hotel, bears a strong resemblance to the Thames Embankment, if you could imagine London sweltering in sultry heat and packed with postcard vendors and street photographers. Shanghai Old Street, situated on Fangbang Road, is particularly interesting. In its 825 metres, the architectural style of the buildings ranges through time from the Ming and Qing dynasties at one end, to the western-influenced Chinese Republic at the other. You cant help noticing the wealthy glory of the former, and the somewhat seedy squalor of the latter.

The rich end of Fangbang Road

The poor end of Fangbang Road

One thing that we were keen to see, and that we were pretty sure was still standing, was the Temple of the Jade Buddha. It was quite a walk through the bustling streets, assaulted on every side by the blare of horns and the tinkle of bicycle bells, directed this way and that by grey-uniformed traffic assistants who constantly harangued pedestrians, car drivers and rickshaw riders alike in an attempt to get them to observe the traffic signals.

The shops selling carved jade and silk clothing, which characterised Fanbang Road, gave way to tiny sheds devoted to the sale of buttons or strips of ribbon, until finally we stood outside the monastery that was our destination.

Outside the Jade Buddha Temple

Outside the Jade Buddha Temple

There was a small fee to get in, and then another fee to see the buddha, and yet more money-making ventures in the form of stalls selling small carvings and jewellery, but apart from all that it was quite a relaxing place.

Bronwyn at the Temple of the Jade Buddha

Reinhard at the Temple of the Jade Buddha

It had quite a number of shrines, each with its impressively carved stone or wood androgynous buddha. The centre-pieces, the eponymous Jade Buddha and the jade Reclining Buddha, were well worth the visit all by themselves, but if you want to see them, you’ll have to go yourself because photography is forbidden. In some ways, this is a pity, because I would have loved to get a picture of the monk in attendance to the Jade Buddha, concentratedly texting on a mobile phone, pooh-bear slippers peeking from beneath his saffron robe.

Temple of the Jade Buddha

All too soon it was time to leave Shanghai, so we paid our enormous hotel restaurant bill and caught the cheap and incredibly high-tech underground metro just as far as the train station, because we couldn’t resist catching the fastest train in the world. It really is an amazing piece of technology. Our original taxi ride from the airport was 45 minutes; the 420km/h maglev did roughly the same journey in 6 minutes, running alongside the motorway and passing the hurrying cars as if they were standing still.

Once at the airport, Shanghai had one more surprise for us. While we were queuing to pay the 90 Yuan departure tax, an official gave us a certificate to confirm that our body temperatures were below 37 centigrade. A little investigation revealed a man with an infra red camera who was reading off peoples core temperatures from a distance. “You don’t have SARS. You are free to go.”

A poor attempt at showing you Shanghai by night