The reason that Iceland exists at all is due to the mid-Atlantic ridge, the boundary between the Eurasian and North American tectonic plates which runs pretty much north-south down the centre of the Atlantic Ocean. The two plates are moving apart at a rate of several centimetres a year, being pushed apart by molten lava welling up between them. Some of this new material gets pushed up above sea level and forms Iceland, which is why the country is so geothermally active – hence the geysers and hot springs.

One of the items on my bucket list has always been to visit the mid-Atlantic ridge. I had always vaguely assumed that I would have to get there using some kind of submarine, but I hadn’t realised that the ridge is visible as an identifiable geological construct at Þingvellir in Iceland.

One of the many spreading cracks at þingvellir

The site is so obviously unique that when, a thousand years ago, the newly formed alliance of Icelandic farmers needed a central place to meet, they chose Þingvellir. For hundreds of years, the Law Rock which sits on the ridge was the site of Iceland’s legal deliberations. In time, wrong-doers were also punished here, usually by being outlawed from society for a fixed period of time, or to duel on an island in the Öxará River. When the country converted from the Norse to the Christian religion – an event which also took place here at Þingvellir – the punishments got more severe, for instance in the case of incest, the man would be beheaded and the woman drowned by being dragged across the lake in a sack. Although the modern parliament now meets elsewhere, important national events are still celebrated here. 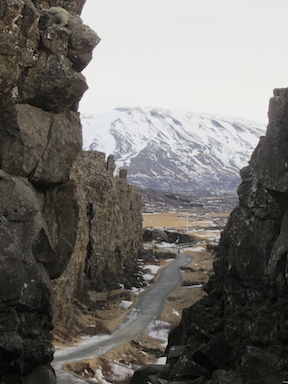 Path along the Mid-Atlantic Ridge at þingvellir 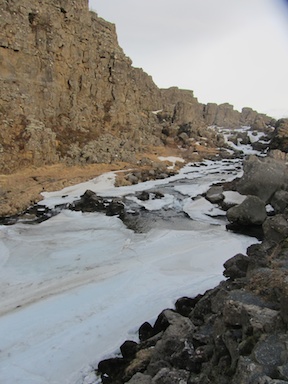 Lake for drownings inside the rift

Even though I’d now seen and touched the edges of two neighbouring continental plates, it still didn’t really feel as if I’d properly ticked off the Ridge from my bucket list. I had been thinking about a submarine and instead found myself ambling along a tarmac path with bus-loads of tour groups. Yes it was picturesque and fascinating, but something was missing.

Luckily Bronwyn had already thought of this, and had booked us a scuba dive to the bottom of the Ridge. We were met by the incomparable Nina and Wouter of Scuba Iceland. It’s so nice to occasionally meet up with other travellers who are such kindred spirits. They were taking us down into Silfra Fissure, known to be one of the best fresh-water dive sites in the world, and the closest thing possible to diving between the two continental plates.

Silfra is part of a river system that drains melt-water into Lake þingvellir, so it’s only a couple of degrees above zero. For this dive we donned thermal underwear, then a fleece under-suit, then a thick neoprene dry-suit. Because of all this additional buoyancy, we also had to carry a lot of extra lead weights, plus big tanks, so getting dressed was quite the process and definitely not a solo affair. Eventually, though, we were ready and staggered down to the start of the fissure. 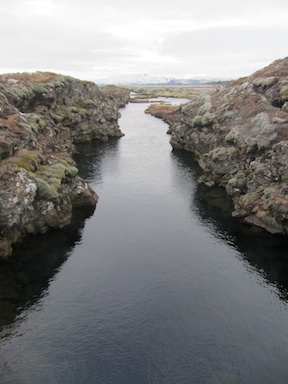 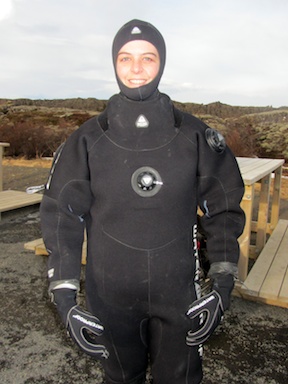 Bronwyn only half-dressed for the dive

The dive is in three phases. The first part is prosaically named ‘the toilet’ and is a narrow channel along the Ridge. Then there’s The Cathedral, and enormous open space littered with tumbled lava which has fallen from the walls rearing on either side, and finally the Blue Lagoon, which has a deep sandy bottom scattered with freshwater springs. Visibility is crystal clear at 120 metres, and the glacial melt water shades everything a beautiful shade of blue. 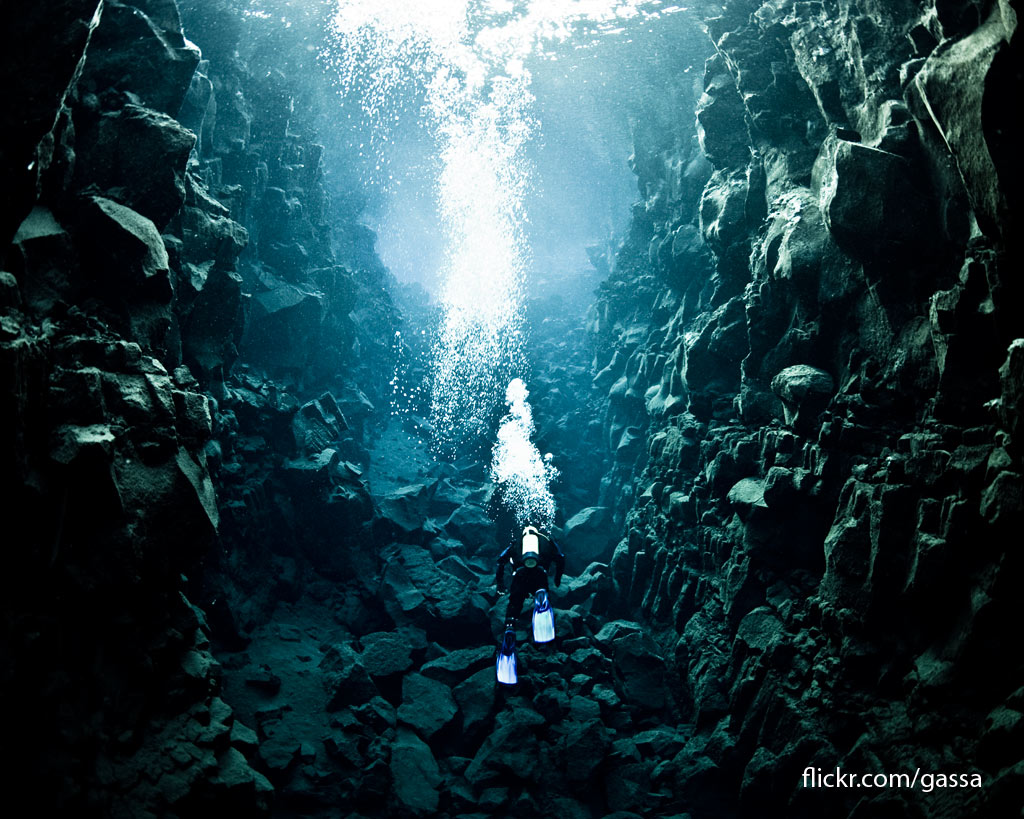 The Silfra Fissure. I borrowed this picture from Scuba Iceland, I hope they don’t mind

Silfra is a shallow dive, rarely deeper than ten metres. Buoyancy control is always a little hair-trigger on shallow dives. This was my first dry-suit dive, and my first dive in fresh water, so there were a lot of new variables to deal with and I struggled to equalise my buoyancy and ran into a few rocks along the way. Nevertheless I had plenty of time to appreciate the ethereal beauty of the place, as well as occasionally just hanging out in the fissure and thinking, “I’m inside the mid-Atlantic Ridge!”

1 thought on “Diving the Mid-Atlantic Ridge”