We have decided to buy some property in the Uruguayan capital of Montevideo. For weeks we have been scouring the internet for likely-looking properties, and by the time we boarded a plane, we had already booked a full agenda of houses to look at. For the first week of our trip, we stayed in and around the old town, mainly the barrios Ciudad Vieja, Centro and Barrio Sur, while taking a little time out every morning to study Spanish at the excellent a Academia Uruguay.

Montevideo traffic
There is a fascinating array of vehicles in town, a little reminiscent of Cuba. There are tax complications with importing foreign vehicles, so there aren’t that many of them around and those that are, tend to be kept running long after you would think that they should have fallen apart. There are rusty old fifties Chevrolets held together with string, rubbing shoulders with seventies Fords that are mainly patchwork and spray-on undercoat. 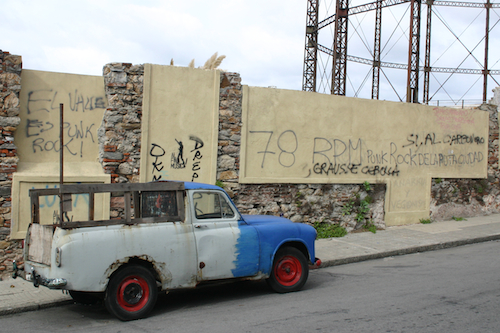 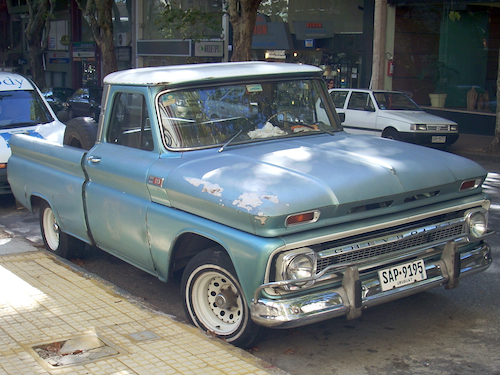 Large cars are rare. Taxis are usually very very small indeed; picture a Fiat Uno taxi, or a VW Polo. They are made even more cramped inside by the installation of an enormous safety barrier behind the front seats, so that there is barely room for passengers to squeeze inside, particularly for Bronwyn and I who seem to be a head taller than anybody else. 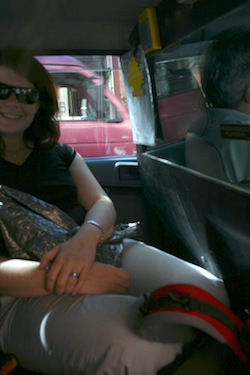 Mixing in with the cars, buses and motorcycles are a lot of horse-drawn carts. These are all owned by a group of gypsies encamped on the outskirts of town, who have the council contract to clear all the rubbish. Each family seems to specialise in a certain product, so you’ll find a cart parked up next to a skip while the gypsies rummage around for prize pieces. Cardboard and plastic seem particularly popular. When we asked the locals about this, they all shrugged and said “it’s a tradition, and the council can’t change it”. 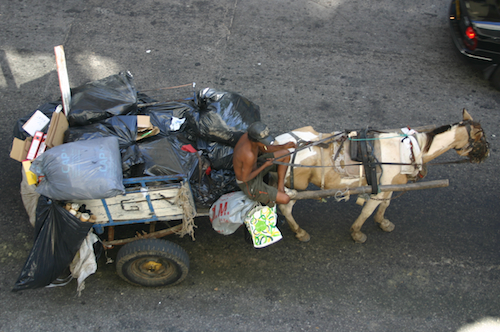 Everybody describes parking as a big problem, but with few vehicles on the roads and what seemed to be a plethora of pay parking sites, it was hard to see what the fuss was about. A parking space underneath your building can often be purchased outright for a few hundred dollars. We would be much more inclined to buy a motorcycle in any case. In marked contrast to the ratty and unpredictable cars, all the motorcycles are new, clean and shiny, and we soon realised that this was because they are locally made; Yumba and Winner seem to be the two most common marques. 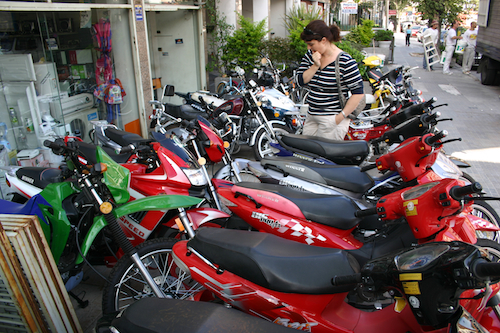 Ciudad Vieja
The old town has been in decline dating back to the political problems in the eighties and compounded by the fallout from the collapse of the Argentinian peso. Apart from those buildings occupied by a few prestigious banks and lawyers, most of the fine old colonial buildings are falling into disrepair. The locals describe the streets there at night as ‘dangerous’, although we didn’t think that there was anything particularly alarming about them, certainly no more than in any other civilised city centre. 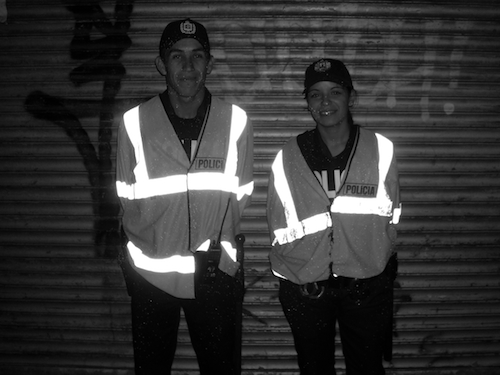 The one part of Ciudad Vieja that is still alive and well is the Mercado del Puerto (Port Market), an entire building given over to the cooking and eating of enormous pieces of meat. They are crazy about meat here. Seared on the outside, soft and tender in the middle, and cooked over a wood fire. You can tell when it’s dinner time, because the town is filled with the sweet scent of wood smoke as all the parrillas light up. To go with it, the Uruguayans have come up with their own wine varietal, known as Tannat, which is somewhat related to a good black Tuscan Chianti. I have decided that this is probably my favourite red wine in the whole world. 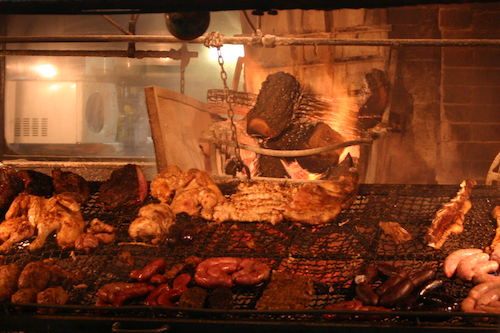 Parilla at the Mercado del Puerto 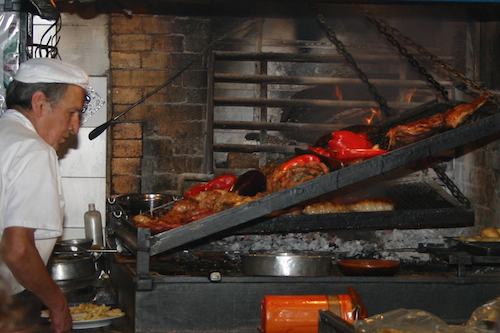 Over the last few years, speculators and architects have been slowly moving in to the old town, and one or two of the more spectacular buildings, such as the landmark Palacio Salvo, have been renovated. 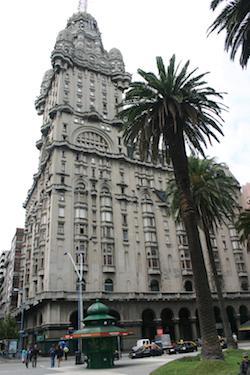 Much of the rest of these barrios are still derelict. 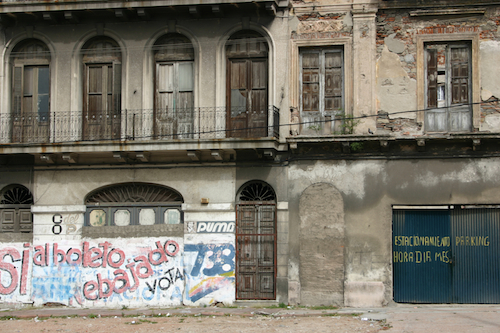 Neglected buildings near the docks

Although there didn’t seem to be anything actually for sale in Ciudad Vieja itself, we did look looked at a number of quite stunning buildings in neighbouring barrios, structurally sound and packed with beautiful woodwork, mouldings, stained glass, enormous ceilings, fine wood tiled floors and marbled staircases, all overlain by a fairly thick veneer of dirt and neglect. 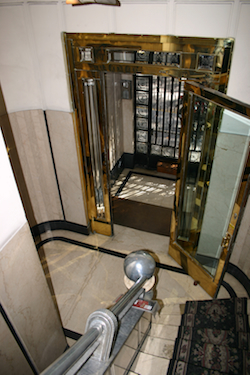 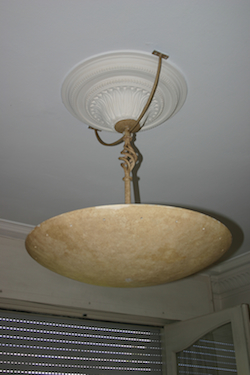 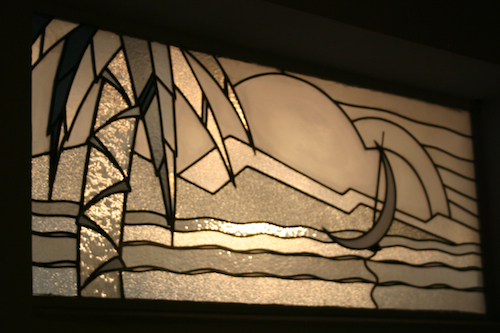 Priced at $60-70,000 (US), any of them would make a great restoration project and a fine residence. If your plan was to re-sell for a profit, though, you would probably need to sit on it for another five or ten or twenty years until the neighbourhood recovers. This is not our plan, as we’re looking for somewhere which ultimately would be our home. The Ciudad Vieja neighbourhood itself contains very little in the way of shops and cafes, but if we did end up living there, then it is an easy walk to neighbouring Centro for supplies.

Centro and Barrio Sur
While Ciudad Vieja has been effectively abandoned, the almost equally old barrio known as Centro is thriving. Here you find the hotels and the shoe shops and the restaurants that you would expect to find in a capital city. The neighbouring Barrio Sur is similar but more residential.

One of Montevideo’s few genuinely ugly buildings, which borders the central square. Artegas on his horse quite sensibly looks the other way.

Where they are being used for commercial purposes, many of the old colonial buildings are in good repair, although the residential buildings are more patchy. In fact, in recent years the architects have been moving in in force, and quite a few of the streets are largely colonial facade, with new building work going on behind. 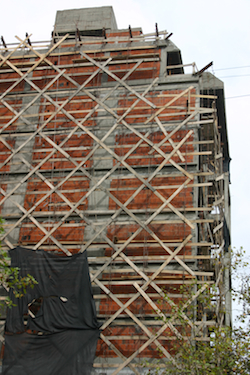 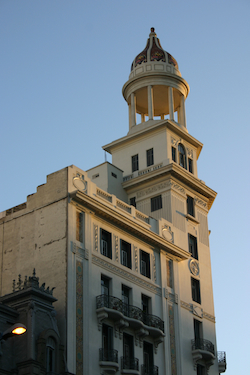 We visited a couple of similar sites close by in Parque Rodo, and were very impressed by the attention to detail. Behind the preserved facade, the builders had carefully stripped out all the nice pieces of stone, tile, glass and woodwork from the condemned buildings, for incorporation into the new structure. No tower cranes or power tools here; these craftsmen build everything by hand. Certainly the architects are proud of their work and, when they are finished, usually mount a signature plaque or carving on the outside wall by the entrance. 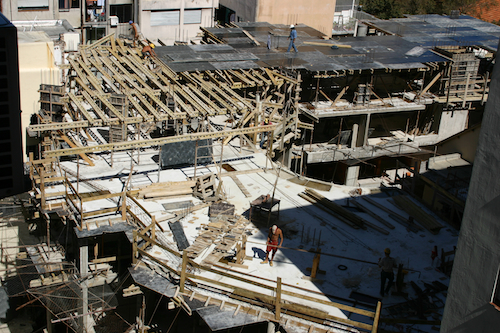 Here as in Ciudad Vieja there are a fair few homeless people and street urchins. Some earn tips by signalling drivers in and out of tight parking spaces, and occasionally one might come up to you and beg if you hang around in one place for long, but even so they are as friendly and polite as everybody else in Montevideo. It is rare to see beggars pestering customers of terrace cafes, for instance, and the locals seem to view them with kindness. More than once we noticed that somebody might hand out a few coins to a beggar “because he has a nice smile”.

We did hear the occasional hearsay tale of robbers on crack cocaine, but we never saw any evidence of it ourselves. The only drugs on the street seem to be cigarettes, mainly smoked by women, and of course the ubiquitous mate.

Eating and Drinking
An inseparable part of Montevideo urban life, mate is a kind of tea made from an infusion of green herbs. It is drunk from a special cup with a special metal straw, and about half of the Montevideans that we have seen, from the oldest businessman on his way to work, to the sweetheart couple strolling La Rambla, to the fisherman on the pier, to the young girl sitting on the street doorstep, all carry a cup of mate and a thermos flask of hot water to top it up with. Mate is a social experience, meant to be shared around the group. 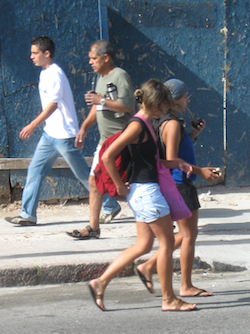 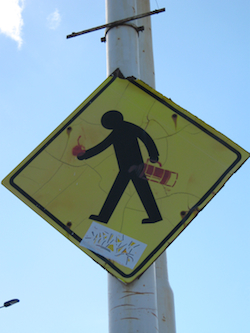 We’ve been staying at a few hotels in a few different areas, just to get a feel for the different areas, but by far our favourite is the London Palace. One of its trademarks is its breakfast buffet, a fantastic array of small nibbles, mainly constructed from the same basic ingredients of sweet pastry, ham, and cheese, but all different in taste and texture. In addition there are breads and fruits, baked apple, rice pudding, and of course the national indulgence dulce de leche, which is a thick brown cream made by partially burning sugar with milk. It is indeed a glorious confection, and is taken in cakes, ice creams, biscuits, on toast, or just out of a bowl with a spoon. 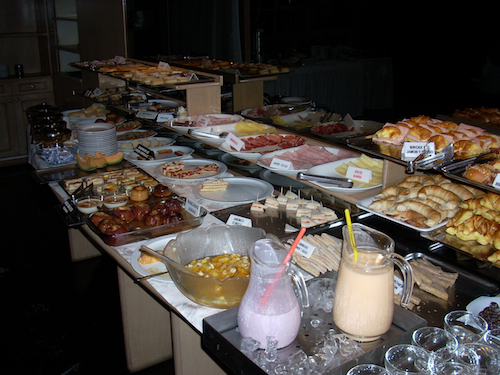 Breakfast at the London Palace Hotel 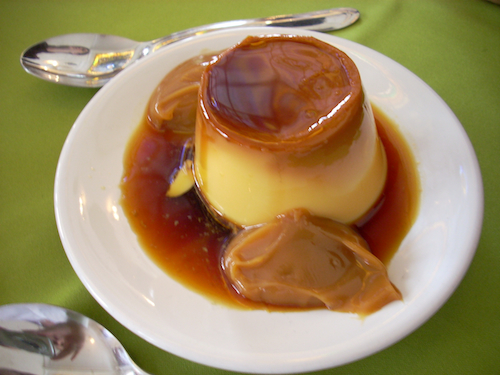 In between looking at properties, we did of course take time out to walk La Rambla, the walkway that runs all the way along the Montevideo seafront. 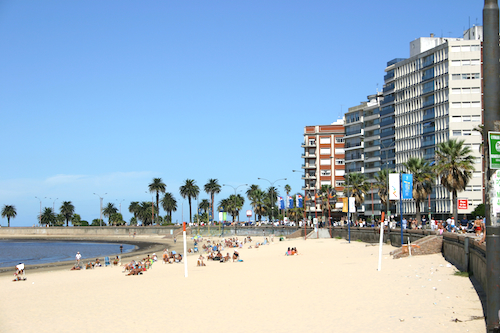 We also dined out in a number of fine parilladas and other restaurants, and snacked in fast-food joints which all sell enormous bottles of local beer and the delicacy known as chevito. This is a huge stack of chips, vegetables, fried eggs, bacon, olives and anything else that the chef can think of, stacked on, under and around a large steak. Fantastic! 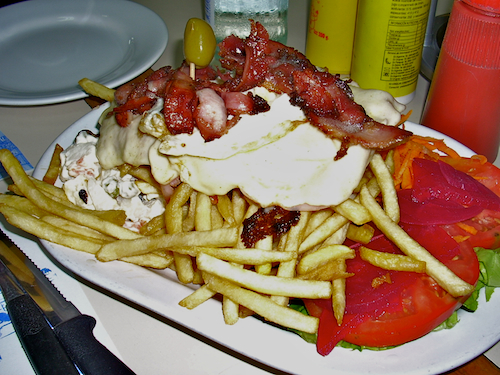 And in between bouts of gluttony, we continued to look for houses.