We were in Kuala Lumpur and were talking about staying on a resort for the last few days of our round-the-world trip, not a type of holiday that we would usually choose, but we were exhausted from the daily changes and felt the need to sit still for a while.

We recalled that a friend had once mentioned the luxury Malaysian island of Langkawi, so without more ado we found ourselves aboard Firefly, a budget airline with a cabin baggage limit so tiny that even our little day sacks had to go in the hold.

Following a quick straw poll of online reviews, we chose the Andaman Resort for pure hedonistic luxury. We did initially plan to visit some other parts of the island, but since the resort was set in acres of thick rainforest in a beautiful sandy bay, we never got up the enthusiasm to leave. We happily spent twelve hours of each night in blissful sleep and the other twelve ambling around on the beach, relaxing by the pool with a book, or enjoying the restaurants and bars scattered throughout the grounds.

It was monsoon season, bringing daily rain without affecting the steady tropical warmth. Generally we ignored it, but one night as we sat in the beach bar the staff began setting up for a beach wedding. It seemed a curious choice by the Australian couple because regular squalls were rolling in from the Malacca Strait, and although the wedding was clearly timed to coincide with sunset, the darkening sky was already obscured by scudding clouds. 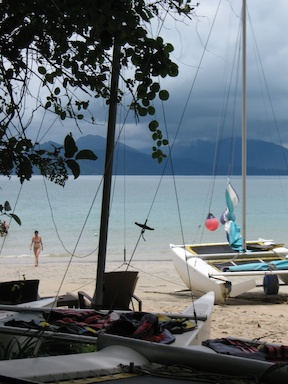 Together with the other bar patrons, we sat with our feet in the warm sand, drinks in hand and protected by a wide-brimmed thatched roof, as we watched the hotel staff struggling to decorate chairs with wind-whipped pandanus leaves. The sound crew were attempting to wrap their gear in plastic bags to protect it from the driving rain, and we wondered why the wedding didn’t simply move to the beautiful little-used marble staircase at one side of the hotel’s immense lobby, which had ample seating and breathtaking views of the storm across the bay. 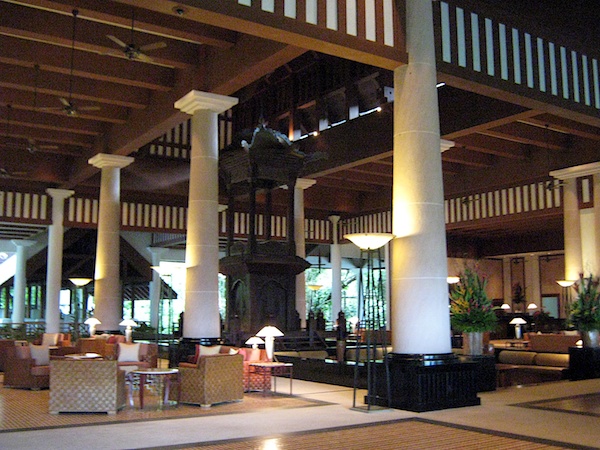 The awe-inspiring lobby of the Andaman

Nevertheless, the group stubbornly stuck to the program: A wedding on the beach is what they were determined to have.

About an hour after a cloud-enshrouded sunset, after a monsoon squall had drenched the assembled guests despite the hastily dispersed sun umbrellas, the bride and bridesmaids finally made their entrance from where they had been sheltering under a tree. The photographer was having a hard time with the premature dark of the looming thunder clouds, and all the bridesmaids got bunched up while he snapped them, leaving the bride stuck at the back of the queue and standing rather uncomfortably among the amused patrons of the beach bar.

The maid of honour came tearing up the path, shouting for the music to start. The sound crew twiddled knobs and pressed switches, but the soaking equipment produced nothing apart from a little scratchy feedback.

The bridal party finally made it to the front, where the celebrant discovered that his microphone wasn’t working. He put it down and began the ceremony without it, his words and the couples’ responses blown away by the incoming squall and drowned out by the crashing surf only metres from their feet.

The groom looked stunned. The bride looked furious. The maid-of-honour looked incandescent. The squall hit full force, all the umbrellas turned inside out, and night cast a blessed shroud on the proceedings.

Warm and dry in our reed-roofed bar, we all turned back to our drinks.