Vesuvius looms over the ruins of Pompeii

Slightly tanned and completely relaxed from our idyllic week on the Greek island of Zakynthos, we caught the leisurely ferry across to Italy. The boat decanted us onto the dock, from which it was a straightforward walk up the main street to the train station. Unfortunately, this is the only possible route and the locals are fully aware of it; the road was a frantic, seething and expensive tourist trap. We paid the exorbitant price for bottled water, because we were hot and needed the fluid, but reckoned that we had enough left-over solid food in our backpacks to see us through to a less money-grabbing town.

It was much quieter inside the station, where we sat on a deserted platform and put together a meal of sorts from the remnants that we had left over from our ferry trip.  We were sitting quietly, sipping our luxury water, when a train pulled in.

Everything went crazy. From nowhere, the platform suddenly filled with Italians, all running around shouting at each other, at staff, at passengers, and at random passers-by. Nobody got on or off the train apart from a handful of bewildered Interrailers who fought their way through the crowds to the exit. The train departed, everybody vanished, and suddenly it was all quiet again. The platform was deserted, apart from three baffled young Englishmen, chewing slowly on two-day old bread rolls.

Our own train wasn’t due for some hours, so I took a deep breath and popped out to see what the town was like at night. I stepped out into a street packed with yelling, screaming, snogging locals, their bodies packed across the entire width of the road, driving their motorcycles down the pavement and generally having a wild time. I’d just spent several days bimbling around in the wilderness and swimming in deserted seas, so it was all rather a shock. I forced myself to conform to the snails-pace push-and-shove just long enough to buy an extortionate can of lemonade and some chocolate, and then meekly retraced my steps to the station.

On my return, I found Andrew and David chatting to Mike and Jez, a couple of Interrailers heading in the same direction, who had found that beer from a supermarket was far cheaper than my soft drink, and indeed any soft drink, including water.

After a good sleep on the overnighter to Naples, we caught the local underground train to the ruins of Pompeii, only to find that we had arrived several hours too early. Mike and Jez were still with us, so we hung about and drank beer in the sun until the site finally opened.

After baulking a little at the entrance price, we all found ourselves delighted. Even though much of the area originally excavated in the 1960s is now closed to the public for conservation reasons, the remaining area to explore is still enormous.

Despite (or because of) having been inundated by the eruption of Vesuvius in AD79, the town is marvellously well-preserved. We stared in wonder at the original paintings, frescoes and shop signs, as well as the occasional shadow of a body, preserved by injecting plaster into the person-shaped hole left in the volcanic ash after the original had rotted away (although most of these had been spirited away to other museums).

Pompeii must have been a colourful town in its day

The amphitheatre at Pompeii (a decade earlier, the site of the recording of the eponymous Pink Floyd album)

There was plenty of room to wander. Most of the buildings had been truncated at just over head-height, giving the feeling of a Romanesque tiled maze, punctuated by ponds, fountains, baths and weirs. Every now and then I would turn a corner and find myself walking down an avenue of stone columns dotted with vibrant palm trees.

Wandering around in the Pompeii maze

I completely fell in love with the civil engineering. The stone roadways are rutted by the passage of cart wheels, and at the end of each street there are holes drilled through the kerb stones where you can hitch your animals. It had never occurred to me before how messy a horse-based economy must be, but the roads run 18″ below the pavement to give space for the ordure. Pedestrian crossings are achieved by the placement of large stepping stones to keep feet out of the mire, with the stones separated by gaps to allow the passage of cart wheels. I am sure that on warm days, you could cut the air with a knife.

Downtown Pompeii, with end-of-street markers in the foreground, and poo stepping stones in the background

The sun was getting pretty fierce, and the site began to quiet down for siesta time. We decided that we needed to go and see the volcano that had caused the whole disaster, so we climbed back down into the cool dark of the underground train system.

Three men up a Volcano

The train dropped us deep in the slums of Naples, with no obvious sign posts or even street markings. We didn’t need directions, though, because the volcano rose impressively out of the smog in front of us, and so we hid our cameras and money-belts and set off confidently toward it.

The city seemed to consist entirely of decaying buildings and rotting garbage. In the violent midday heat, we clambered up through layers of foetid odours, trying our best to avoid the indescribable streams that ran down the cobbled streets. I had pondered earlier on the possible smells of Pompeii in its heyday, and I suspect that these modern streets came close.

Finally we emerged from the indescribably foul city and onto the flanks of the volcano itself. Sweat pouring off our bodies in streams, we managed to hitch a ride up to the base of the chairlift.

The chair was very expensive, even more so than entry to Pompeii, but we were so hot and sweaty that we couldn’t face humping our backpacks any further.

The chairlift was magical. Apart from the slight hum of the tower wheels and the distant click of cameras, the journey to the summit was silent and very peaceful, revealing a breathtaking panorama. As we rose higher, the whole of Naples came into view, the squalor masked by distance, against a back-drop of mountain-tops poking up ethereally through the cloud.

At the top, we were met by a guide who apparently came with our chairlift ticket. His English was almost incomprehensibly accented, but he did rather amusingly demonstrate the echo across the crater. We were able to wander around the caldera a bit, but there had been some recent rumbles and a lot of the path was fragmented and inaccessible. That said, to our eighteen-year old eyes there was disappointingly little overt activity, just a few small fumaroles, but the size of the volcano was impressive and the views more than compensated. 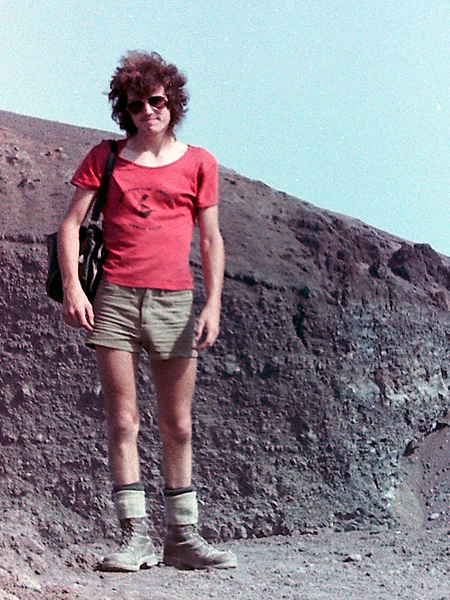 Standing right on the edge of the caldera 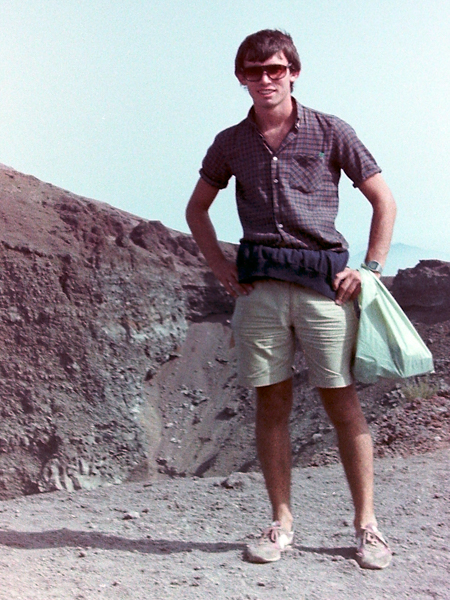 David, not quite so close to the edge.

We were enjoying ourselves so much that we rather lost track of the time. Suddenly we realised that we only had three and a half hours to make the four-hour journey back to Naples Central station, so we set off down the volcano at a run. The road had recently been distorted by  recent volcanic activity, and now the first part of the journey down was actually uphill. Eventually we crested the rise and began swiftly to descend.

Following the success of our previous hitch up to the base of the chairlift, we decided to see if we could get a lift from one of the occasional passing cars. We didn’t having too much joy, because after all, who has room for three large men with backpacks?

A bus rumbled past. David optimistically stuck his thumb out. “Don’t be stupid,” I said, “you can’t hitch a ride on a bus”. There was a whistle of air-brakes and it came to a stop, the doors opening invitingly. David shouted something in Italian, and we climbed aboard.

It was quite a swanky bus, but all the seats were full so we stood in the central aisle, reeking of sweat and banging people with our backpacks. At least some of the paying passengers appeared to share my opinion about the logic of hitching on buses, and a voluble argument broke out. The driver shrugged, closed the doors, and took off like a bat out of hell.

We were assailed from all sides by the stony glares of the tourists, but soon all we cared about was hanging on to the ceiling straps as we tore down the small, winding road only inches from the precipitous drop. Perhaps in direct response to his passengers’ complaints, the driver took an unscheduled detour to drop us at the only train station for which we had valid tickets.

David still reckons that we owe him for that one.

1 thought on “Three Men on a Train: 7 – Pompeii and Vesuvius”