After somehow escaping the worst horrors of the infamous Belgrade Express, we finally emerged onto Greek soil and stood blinking in the hot sun of Athens.

Mount Lycabettus rising above the city of Athens

As had become customary on this trip, Andrew and David wanted to buy souvenirs, so we took a subway to the Flea Market, where I hung around on a street corner with our packs while the others went shopping. The market was a deafening mixture of large motorcycles and shouting men selling just about any possible item that you could imagine. The hot sun was wonderful, although by the time others came back, the sweat was pouring out from beneath my hat and down my back.

Shopping duties done, we visited the Acropolis, the ancient citadel high above the city. Perhaps the most famous building there is the Parthenon, an ancient temple which was being rebuilt when we arrived (I noted in my diary that it would be impressive when the work was complete, but when I returned 15 years later, the scaffolding was still up).

The Parthenon at the Acropolis, artfully photographed to avoid the building works

Andrew and I and some other skinny people at the Acropolis

From the Acropolis is was a hot hike in the midday sun to the Agora, once the civic centre of ancient Athens. Now it is a wide area of ruins with an interesting museum of salvaged statues and columns at one end, and the almost complete Temple of Hephaestus at the other. We caught the temple just as the sun was setting, and prevailed upon a friendly tourist to take a picture of us.

A byzantine church that we passed on the way to the Agora, photographed over a chain-link fence 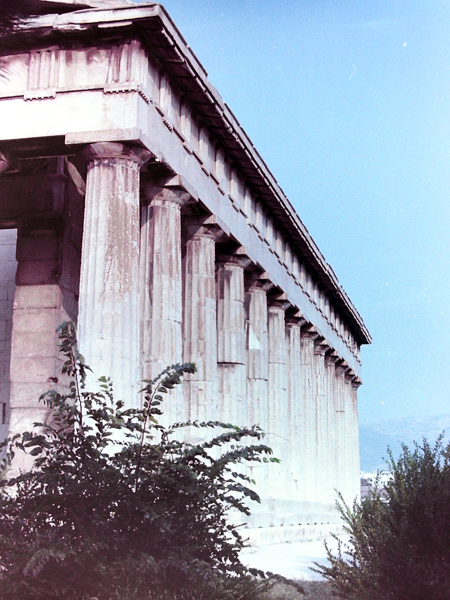 Temple of Hephaestus, at the Agora 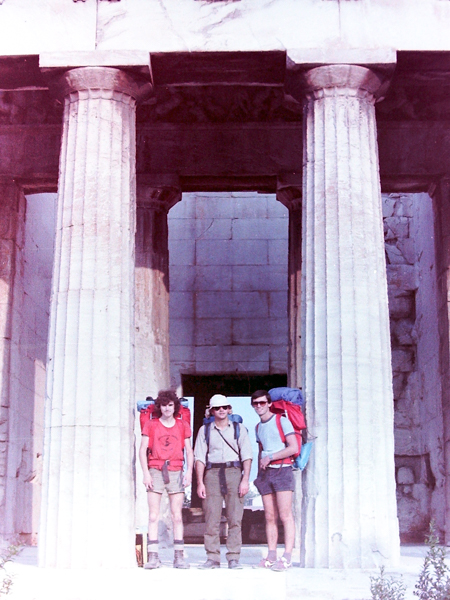 Three men at the Temple of Hephaestus

Patras, Kyllini and beyond

We realised that we had given ourselves far too little time to explore Athens, but it was getting late and we needed somewhere cheap – or preferably, free – to sleep, so we caught a train to Patras. We arrived after midnight, and the whole platform was lined with the sleeping forms of other interrailers, all waiting for the morning train. We set up our sleeping bags and set about preparing our dinner. Although Greece wasn’t as expensive as northern Europe, it was still much more expensive than the Eastern bloc, so rather than try to dine locally we laid out the last of our Hungarian provisions. Our knowledge of written Hungarian was shaky at best, so we weren’t entirely sure what was in the cans that we had brought from Budapest. In the event, we feasted on sardine sandwiches and chicken-flavoured baby food. Well, it could have been worse.

We had a pleasant sleep on the platform and then I was grateful for a wash in the station bathroom. From my diary, I see that this was also my first encounter with squat toilets, which I found simple enough to deal with, especially when wearing a backpack because I could rest it against the wall behind me to take the weight off my calves.

Although we were up and about at first light, some of the other interrailers were still asleep when the station opened. These unfortunates were unceremoniously and vigorously woken by the station master, who was clearly used to finding comatose bodies when he came to work, but who didn’t want his station to look like a doss-house when the first train arrived.

Interrailers waiting for the train at Patras station

While waiting for our train to Kyllini where we intended to catch a ferry to Zakynthos, we were accosted by one of those travelling Americans that you bump into from time to time. His story was that he had retired at 40 and made his living buying and selling yachts, and had spent most of his time since travelling from country to country and (if he was to be believed) picking up girls. Before he left, he introduced us to a group of three girls travelling together, which caused much embarrassed eye-rolling among the six of us.

The Kyllini train was wonderful. The tracks ran straight down to the sea and just sort of petered out into the sand, at which point we climbed down directly onto the beach. The sun was high in a perfect blue sky over golden sand, and we felt that we had truly arrived in the Greece of picture postcards.

It was lunch time, we had skipped breakfast, and there was a restaurant close at hand. Of course we spoke no Greek, but Andrew and David hatched a plan to use some of the phonetic translations in the Interrail Bible. They proudly pronounced their syllables, and were escorted into the kitchen where they were invited to select the raw ingredients for our meal. When they returned to our table, they still had no idea what they had ordered, but when it arrived it was a very tasty dish of grilled purple squid with a tomato salad. Unfortunately it was also extremely expensive, blowing our budget for the day.

Later that afternoon, we secured tickets on the MV Martha (costing a mere third of the price of our lunch), and climbed onto the rooftop deck as she set sail for the Ionian island of Zakynthos.