We’ve been hiding from the storms that are currently destroying property all down the southern Queensland coast. Gale force winds, monstrous seas, and biblical rainfall have already claimed at least one life, and that was on land. Even if we were crazy enough to go out to sea, there’s nowhere to go because the bars up and down the coast are all effectively closed to traffic.

There are a several cruising yachts packed into this little basin. Every day or so, one crew or another climbs up to the Caloundra lighthouse to see what the conditions are like out to sea, and then return shaking their heads. 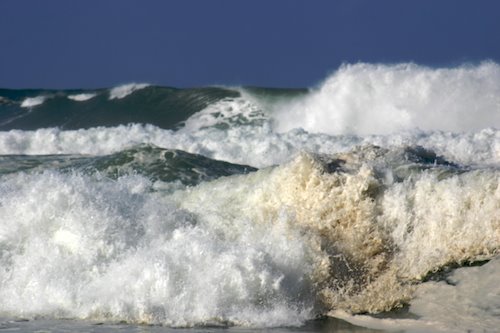 One evening we noticed a harbour fisheries vessel going from yacht to yacht. Each visit seemed to involve a lot of discussion, and we assumed that they wanted to discuss fishing quotas or check our documentation, so we were a bit surprised when they arrived at our stern and began threatening us with fines and legal action for outstaying our welcome in Mooloolaba. In actual fact we were still within the ten days which local rules allow when hiding from inclement weather, but this didn’t slow them down at all. With vague threats of heavy penalties, they advised us to abandon our yacht and move into a hotel.

They spent a particularly long time on one of the larger yachts which has apparently been here for quite a bit longer than us. There seemed to be lot of paperwork being passed back and forth, and next morning when I was just thinking about puttering over to ask the skipper what it had all been about, we noticed that he must have left on the dawn tide. We can’t imagine where he went, and hope that he found some safe harbour before the next 55-knot gale hit.

Days passed. Endless rain hammered on the deck. Wind howled in the rigging. Flood waters surged by, battering the hull from side to side. The mud-laden river was packed with wreckage from upstream, and sometimes one of the larger pieces of debris would bump up against our hull and scrape past on its way down to the sea.

On another evening we were down below, catching up on some paperwork, when we heard a soft thump from outside. We weren’t overly concerned, as it didn’t sound particularly alarming and was probably just something bouncing off the deck in the storm. A little later there was another one: thump.

The rain slackened off for a moment, and I got up to open the bathroom window because we had been getting the occasional whiff of an unpleasant smell and I thought perhaps that we should let some ventilation into the head. While I was up, I stuck my head out of the hatch to look at the weather and was greeted by a loud thump-thump on the deck and a strong smell of stale fish.

I turned on the torch and started laughing. There were two gannets roosting in the top set of mast spreaders. Every time they let fly with some droppings, the wind whipped them back at a sixty degree angle to impact just aft of the dodger. They can’t have been there for more than a few hours, but the sheer volume of guano was astounding. The floor of the cockpit, both lockers, and both solar panels were liberally coated in up to a centimetre of foul-smelling paste. 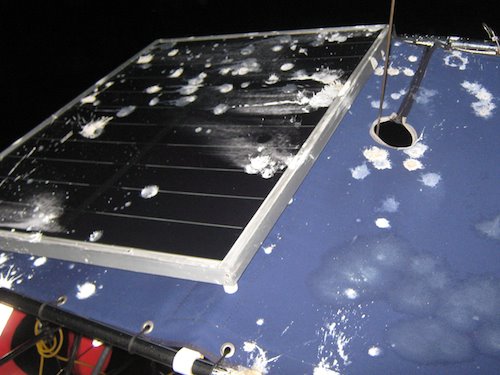 I waved my torch at the birds and they sulkily left to find another boat, but not before one of them scored a direct and very wet hit on the padlock for the locker containing the cleaning equipment.

We got the hint. It really was time to leave.