We were up and out at half past five in the morning for the short drive to the Taj Mahal. Although they were clearly geared up for large numbers of tourists, there were only a few dozen people in sight, and no queues.

Touts for rickshaws, tuk-tuks and tongas clustered around, insisting that the entrance to the Taj was over a kilometre away, which of course it wasn’t. We took a tonga anyway, a carriage drawn by an old and skinny horse with an uneven gait,and were relieved to find that the journey was only a few bone-jarring hundreds of metres around the next corner. 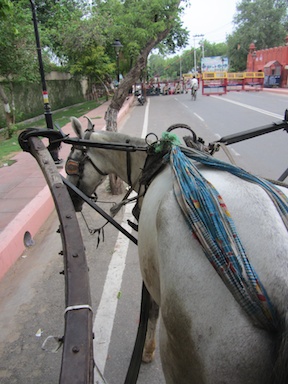 All aboard the Tonga Express 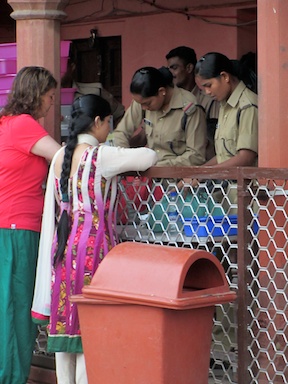 After being frisked and scanned through yet another security check, we ran a small gauntlet of prospective guides and photographers. In the end we allowed a particularly persistent photographer to attach himself to our group on the grounds that he didn’t want any money unless we chose to buy his photographs.

It was first light, very humid and sticky. The Taj loomed mysteriously from the mist. It is obvious why it’s regarded as one of the Wonders of the World. It really is quite beautiful. 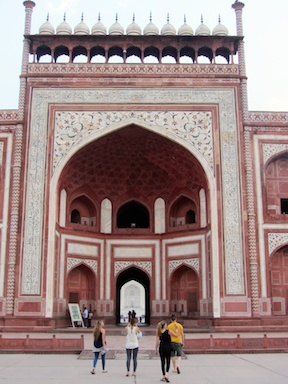 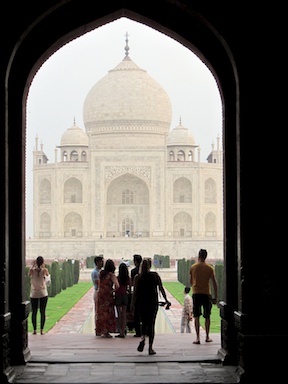 First glimpse of the Taj Mahal through the Royal Gate

The Taj Mahal (Crown Palace) is a mausoleum, built in the early 17th Century as Emperor Shah Jahan’s monument to his late wife. It stands in an elaborate garden containing four reflecting pools, and is flanked by a mosque and a guest house. It has a beautiful dream-like presence that can only be hinted at in photographs. 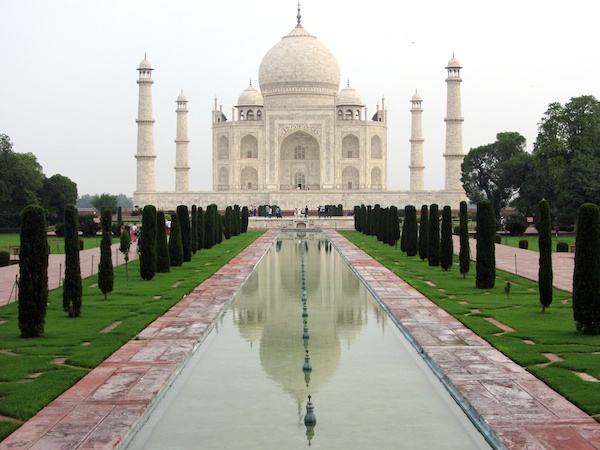 Probably the classic Taj photo, across one of the reflecting pools 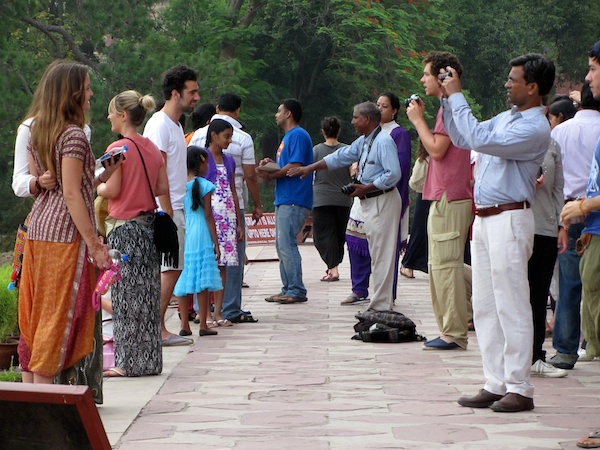 Tourists (or their photographers) trying to take the classic Taj photo

Our own photographer had us posing here, posing there, with madam, without madam, standing up here, sitting down there, hands in front, hands behind… Until both Ankur and I cracked at the same moment and cried “Enough!” 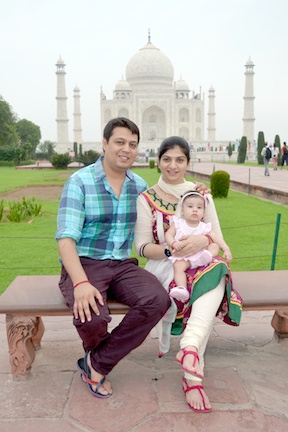 Ankur, Tanu and Amaira are posed for a shot 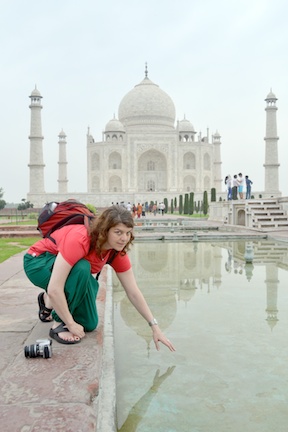 Bronwyn is slotted into place for yet another photo

After we’d got rid of the photographer, we had a pleasant and uninterrupted wander around the grounds. As we approached the Taj itself, we realised that it is much bigger than its ethereal looks convey. 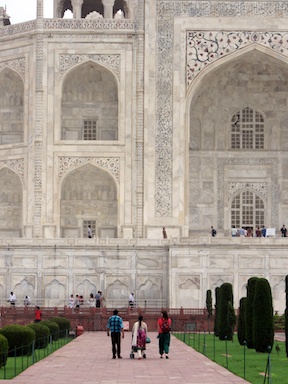 Approaching the looming wall of the Taj Mahal 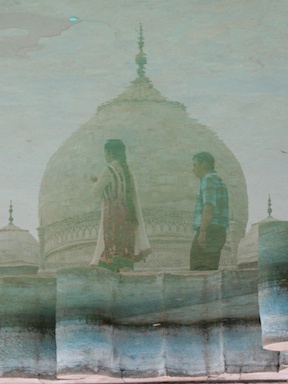 Tanu and Ankur reflected in the pool

The interior, while encrusted like everything else with inlaid semi-precious stones, is a simple dark open space containing the sarcophagi of the king and his wife. It has an amazing echo, and although there were only a handful of us moving quietly and respectfully around the tombs, the dome amplified the sound to a multitude of hundreds. It must be really loud in there during the peak tourist season. 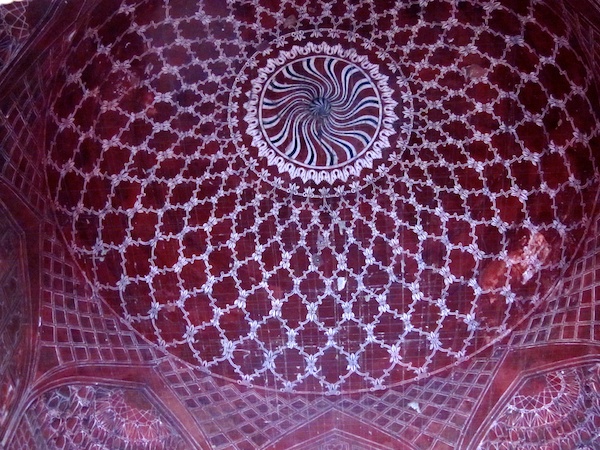 Inside the dome of the Red Mosque 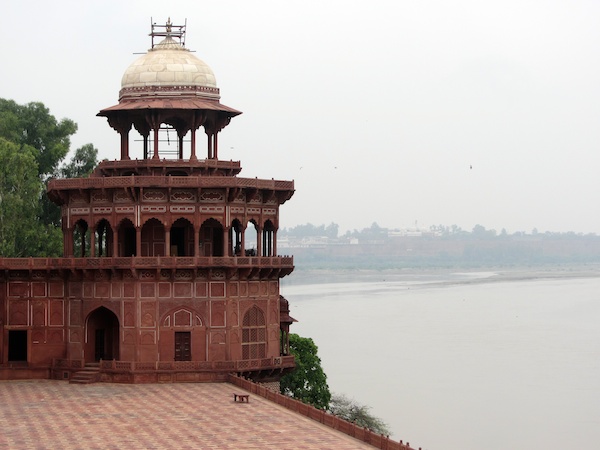 Looking out over the Yamuna River 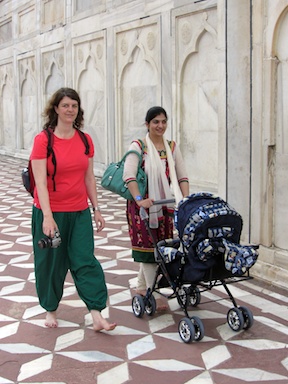 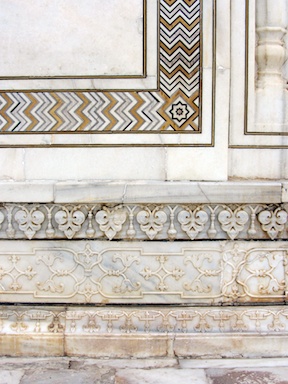 Every tiniest detail is intricately carved 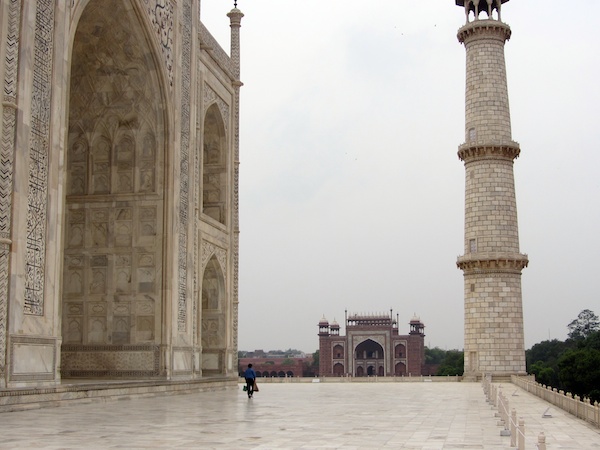 As the sun started to beat down and the tourists began to flood in, we took our leave. On the way out, we dropped into the photographer’s stall and discovered to our surprise that his pictures were rather good, so we bought them. Then we ran the gauntlet of marble trinket salesmen and, avoiding the clamouring tonga touts, made our way back to the hotel for a pre-breakfast nap.