Travelling light as usual, we arrived at Oslo airport with only cabin baggage, booked an express train from an automated ticket machine, and after a clean and fast trip emerged blinking into the Autumn sunlight. The friendly Hotel Thon was easy to find, and we were given a room on the second floor with a balcony fully fifty feet long and twenty feet wide. 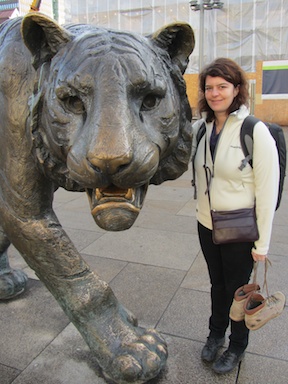 A lion was waiting at Oslo station 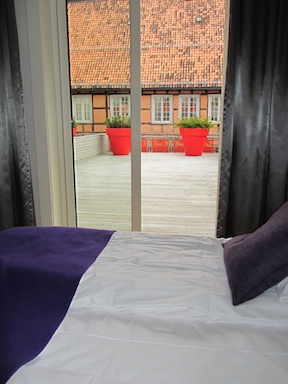 Enormous balcony at the Hotel Thon

Close to the station is the Aker Brugge, an area packed with restaurants, all with busy outside areas, everybody chatting and drinking and eating. Many of the seats were draped with sheep fleeces, and at other restaurants the waiters handed out blankets as you arrived, so that despite the ten degree chill, short sleeves and mini-skirts were not uncommon. 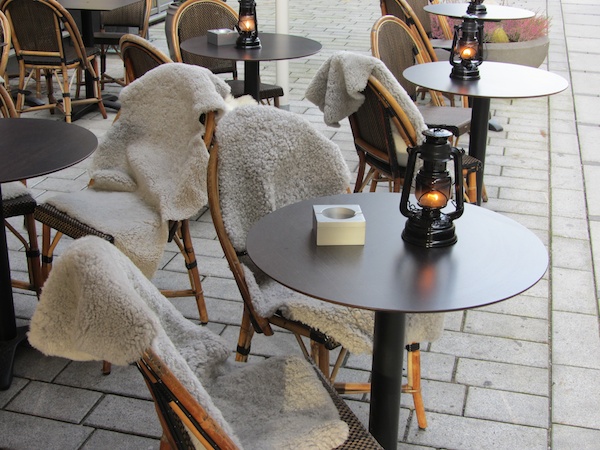 We chose to eat inside a cosy Italian restaurant, where the drinks were the typical Scandinavian triple the English price, but the service was friendly and the food was excellent. Eventually we ambled out into the last hours of light, intending to get a quick nap at the hotel before going out on the town.

The Radhuis
On the way back, we passed an enormous brick building that looked like a power station but which turned out to be the Radhuis or town hall. We stopped to admire some friezes along the outside walls, carved wooden scenes from Viking mythology, and then suddenly realised that the building was still open to visitors. 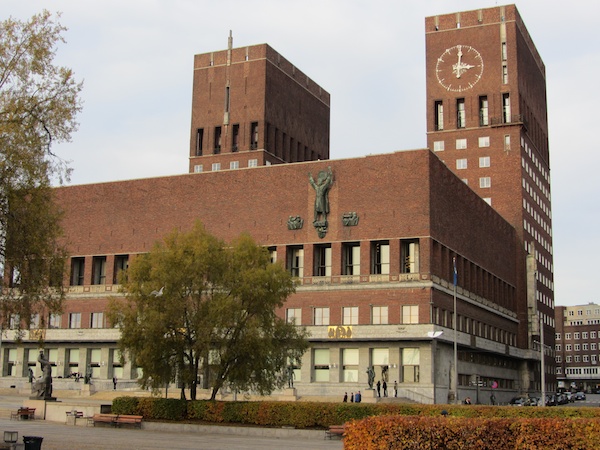 We went inside and found ourselves in an enormous space, not dissimilar to the turbine hall at the Tate Modern in London, but painted throughout with allegorical wall friezes not only there, but also in a chain of spectacular rooms that led around the second storey. 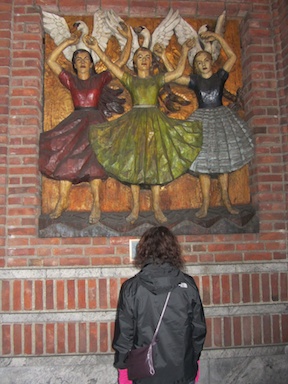 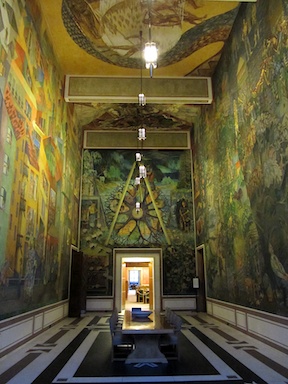 The inside of one of the Radhuis rooms 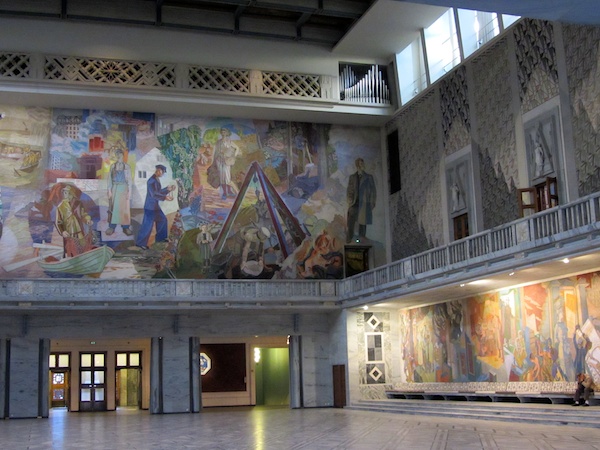 The main hall of Oslo Radhuis

The paintings were in the style of 50s communism, all square jaws and bold colours, with heavy emphasis on agriculture and industry. However, each frieze told a story, and that story was often a complex mixture of mythology and the recent German occupation, mythical figures juxtaposed with prisoners in concentration camps. The bear of Norway baring its teeth at uniformed trolls as they tear the clothes from the newly released princess. Very stark and very effective. 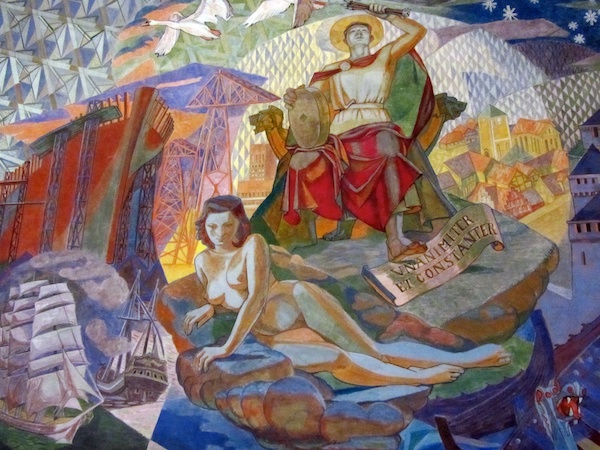 A rather jingoistic frieze in the main hall

It was evening when we finally tore ourselves away, and continued to our hotel for that nap. Our alarm went off later that night, but we were happy to ignore it and sleep through for the next twelve hours. After all, we were on holiday.

Frogner Park (Vigeland Park)
The following morning, after a breakfast of coffee and herrings, we headed out to the glorious Frogner Park, which has long been one of my favourite places in Europe. This entire green space is given over to the works of Gustav Vigeland, who designed and built the whole thing over a ten year period. The weather had been a bit glooomy, but the sun came out and glowed from the carpet of yellow maple leaves underfoot, as we joined the hundreds of tourists enjoying several hundred works of art spread over almost a kilometre. 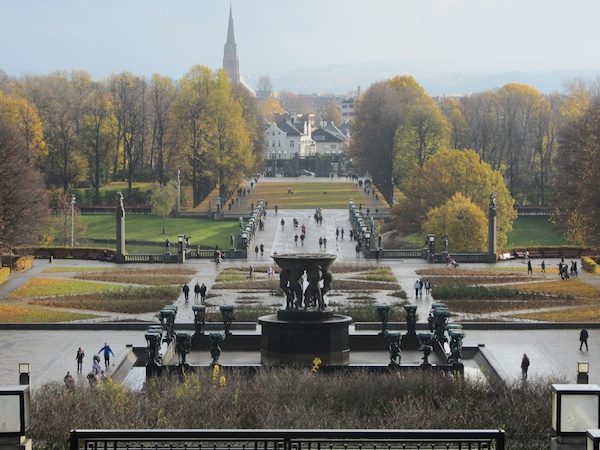 The view back across the bridge from the central plaza. 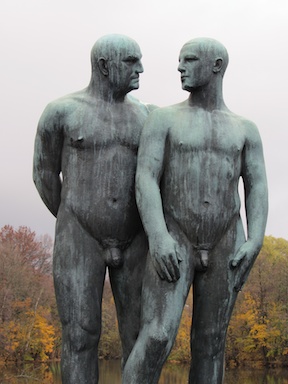 I love these guys! Cocky son. 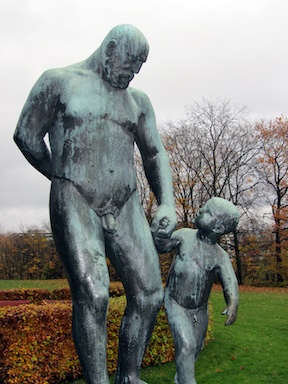 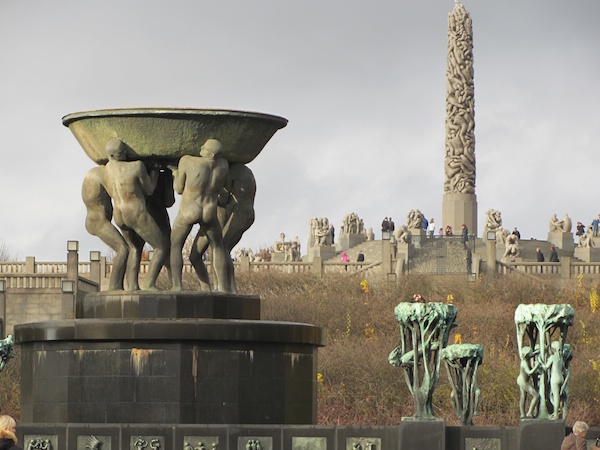 Once you leave the bridge of bronze sculptures, you climb up to the centrepiece of granite pieces. 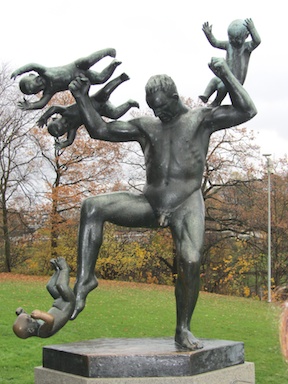 Eventually you realise that he’s not kicking them, he’s trying to save his falling children. 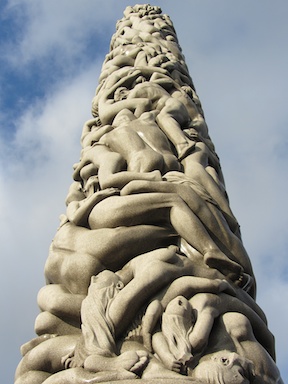 The ages of man, the dead at the bottom supporting the youngest on top.

The Oslo Museum is situated in Frogner park. We watched a very clever and entertaining film called “1000 years of Oslo”, which was put together in an amusing way from shots of museum exhibits and paintings. It covered exciting periods of boom and bust, wealth and poverty, and then skipped suddenly from the 1920s to the present day, missing the occupation and holocaust. The actual museum did much the same thing, with a display for every period of settlement since the Vikings except for the World Wars. The Norwegians had an ugly war.

On our final evening, we headed up to the Grünerløkke district, which is famous for its local bars and cafes. We were not disappointed, there were establishments of every style and ethnicity. We stopped at a few for glasses of wine and snacks, and were pleased to find that – presumably because of the vastly over-taxed prices – each small glass of wine was checked and re-checked and treated with a great deal of respect.

At one bar the owner suggested that we try a soup made from lamb, cabbage and potatoes. It was very good, and we were told that in traditional bars it is made available as a cheap dish for the benefit of heavy drinkers. I did have trouble getting my head around the idea that anybody who can afford to be a heavy drinker in Scandinavia might need cheap food, but the concept is still admirable. At another bar I scored a beautiful lightly poached whole trout with leeks and a cauliflower sauce. They certainly know how to keep their patrons happy in Oslo.