We watched the weather carefully, and the very next northerly that came through saw us skipping work and taking the train up to Port Stephens. The conditions were predicted to hold from Friday evening until Saturday lunchtime, so we thought that this would be the perfect opportunity to make our first ever night-time passage. Our newly refurbished sails set us zipping along into the evening at almost seven knots. As we cleared the heads and got into the open sea, a humpback whale breached in front of us, which had to be a good omen. 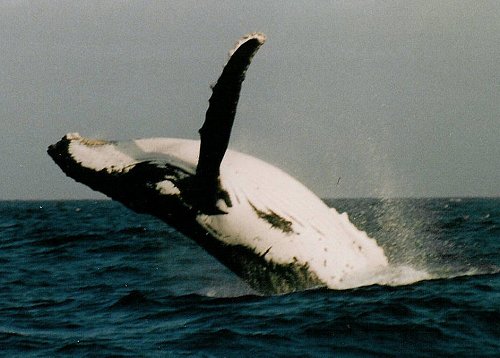 Since there were only two of us aboard, we had to maintain a night watch, manning the helm in shifts. After some discussion, we had chosen an evening of two-hour shifts, followed by a night of three-hour shifts.

We had very different expectations of the night ahead. I was a night shift worker for many years, and was used to having a zonked body clock and coping with the circadian plunge at 3:00am. I had hiked, climbed, and camped extensively at night, and was familiar with the trick of seeing by starlight. Bronwyn, on the other hand, was a bit of a city kid and found the darkness unsettling.

We were both awake for the first couple of watches, during which we checked the boat over and made and ate dinner. As darkness fell, we realised that there was no light in the compass binnacle, but we had a torch to check it with and in any case we could read the heading off the GPS repeater.

At 22:00 I went to sleep in the forepeak while Bronwyn took the first three-hour watch. It was a fine, clear night and the wind was warm and steady and coming from behind us; perfect cruising conditions. Bronwyn started to relax, and when it came to 01:00 she decided to let me sleep for an extra hour. At about this point we were passing the queue of bulk carriers waiting to load coal at Newcastle. There were about forty of them strung out along the 50 metre line, all showing bright white lights.

More tired that she realised, Bronwyn started to get confused about which lights were houses on the shore, and which were large ships. I was woken by the sound of sails flapping, and came up on deck to see Bronwyn peering into the dark compass rose and muttering about the wind changing. In fact she had got disoriented by the ship lights and had got us turned around 180 degrees. There was no harm done, and I took the helm as she went gratefully to bed. It all showed just how easy it is to make mistakes when you are tired.

It was 02:00. We got past the big ships, and the sea became quiet and dark. I fitted a boom preventer and sat and waited for the evil 03:00, the time when the bodys circadian rhythm hits absolute bottom. It was at about this time that I realised that our new stainless frame was causing a problem. One of the supporting struts had been mounted aft and outboard of the stern light, and was casting a reflection of it back into the cockpit. The actual amount of light coming off the one-inch steel tube must have been tiny, but in the deep darkness of the night it was more than enough to completely ruin my night vision. I tried wrapping a rope around the tube, but even the light reflected from the dull matt fibres was too bright. In the end, I found that the only tenable position from which to steer was over to the starboard side with my back to the stern light, which wasn’t hugely comfortable. The stern light would have to be moved.

Distant lighthouses came and went on the shore as we ploughed our lonely furrow. The moon came up behind us in a beautiful red glow, and the first fingerings of dawn touched the eastern skies. I made an entry in the log, woke a restored and cheerful Bronwyn for her shift, and lay down on one of the sea berths. This was also a first, as until now I had only ever slept in the fore or aft cabins, but I found that from the berth I could see out to the helm, and Bronwyn could see in, which was comforting for both of us. I closed my eyes and in moments was fast asleep.

At 08:00 I got up to a day of glorious sunshine. Bronwyn had taken us almost to Broken Bay, and as we made the final course adjustment to take us through the heads and into Pittwater, a pod of dolphins played briefly in our bow wave. We grinned and waved at them. We were home.