In order to break up yet another long-haul flight, we decided to hang out in Hong Kong for a few days. After a shaky start (I dropped my laptop in the arrivals hall, completely smashing the screen), we found a hotel shuttle bus and headed out into the city. My first impression was that it felt a bit like Hawaii, which puzzled me until I realised that the similarity lay in the combination of the familiar – the road signs, the cars, the engineering – with the exotic – the Hanzi characters, the huge towers of tiny apartments, the great luxury of the transfer bus that we were in.

Our hotel, the Cosmo in Kow Loon, was a tower of some 20+ storeys crammed with tiny little glass-walled boxes. There is room for a small but comfy bed and a little shower/sink/toilet area walled off with glass. Every surface is mirrored to give the illusion of space, and the outside wall is entirely glass, giving a stunning vista across Mong Kok, the most densely populated area in the world. 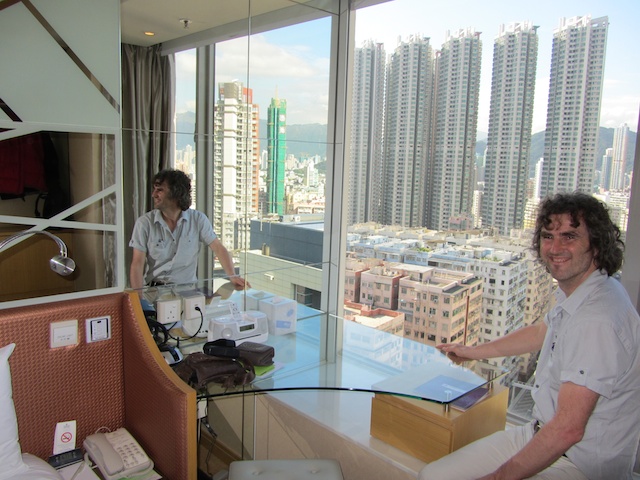 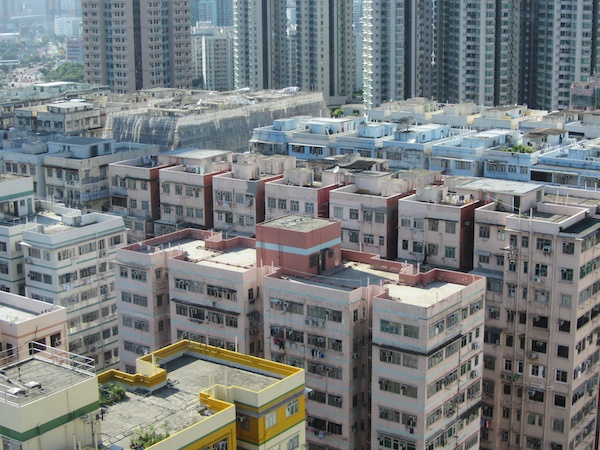 The rooftops of Mong Kok

Given that Mong Kok is also famous for its shopping, we dropped in to a dealer to buy a new laptop, and then left them transferring my files while we headed off to explore.

Hong Kong trams are lovely, like skinny London buses with open windows, nice and breezy when they’re not crowded. We took trams all the way down to Causeway Bay, and then all the way back across town to the Peak, content to just sit and watch the world scurry by. 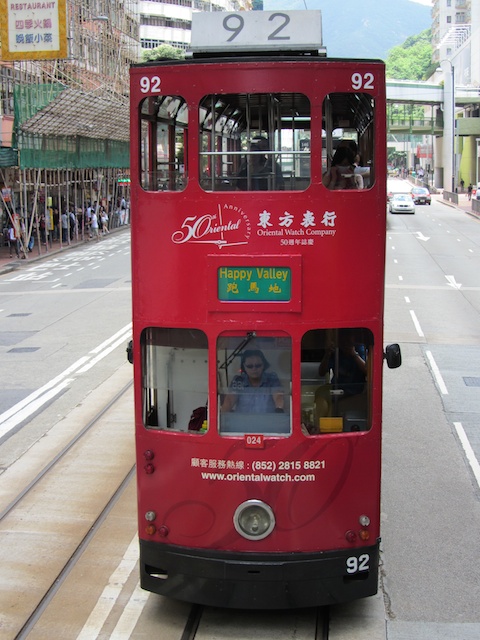 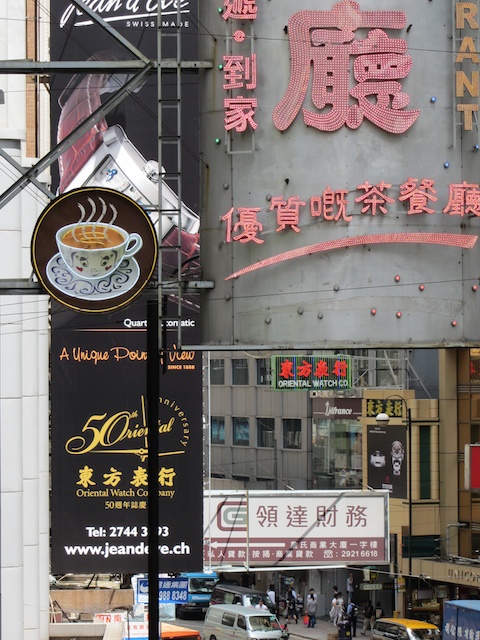 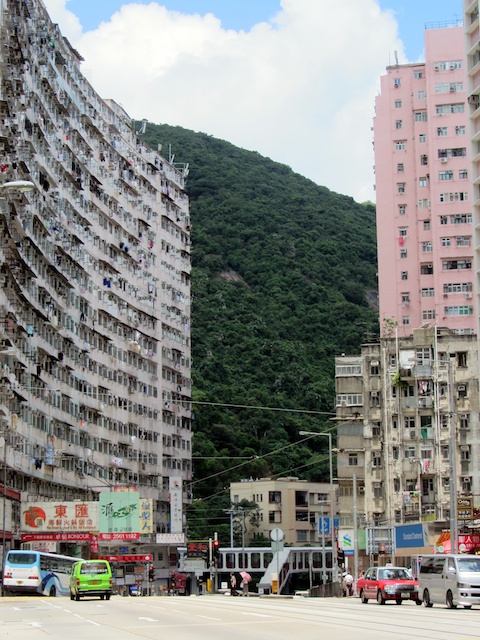 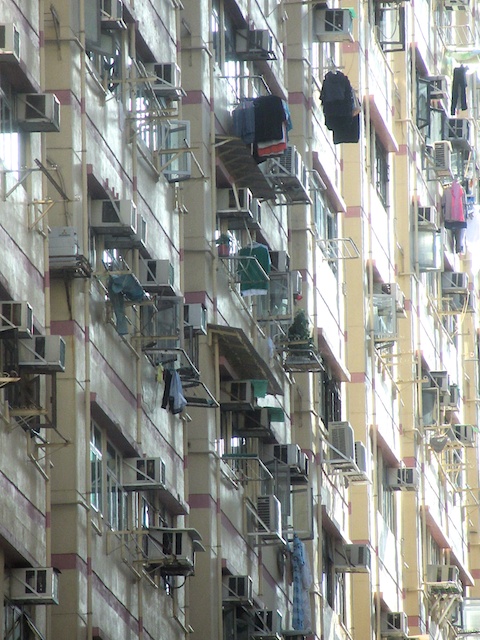 We grabbed lunch at a local Chinese eatery, where the waiter was very obliging after he got over his fear that we didn’t know what we were doing. Then we began the long climb up to the cable car station for The Peak. 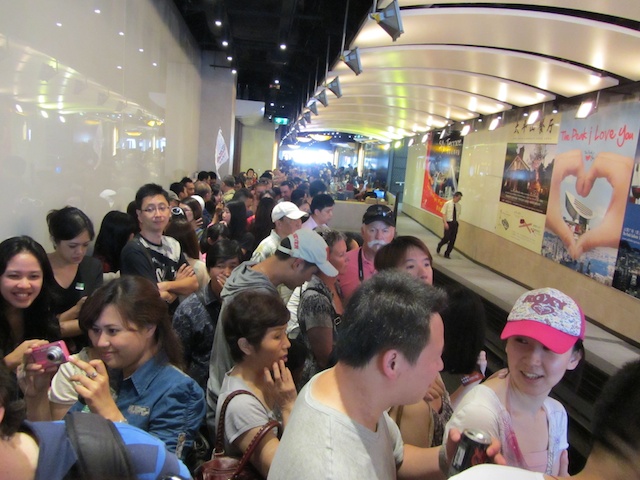 Waiting for the Peak Tram

The last time Bronwyn had been here, there was a viewing platform at the top, but now there was an enormous mall and even a Madame Tussauds, with escalators leading up to restaurants and to the new ‘Sky Tower’. The views from the top were very impressive. 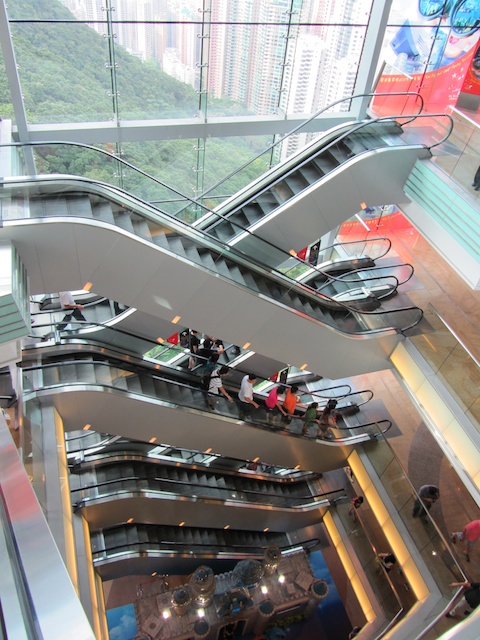 Escalators up to the mall 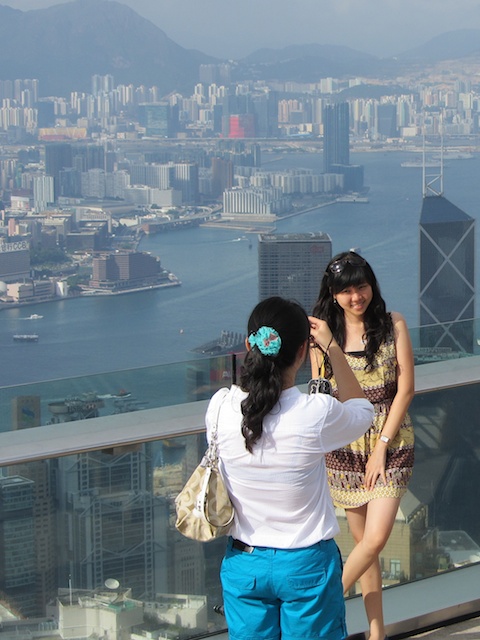 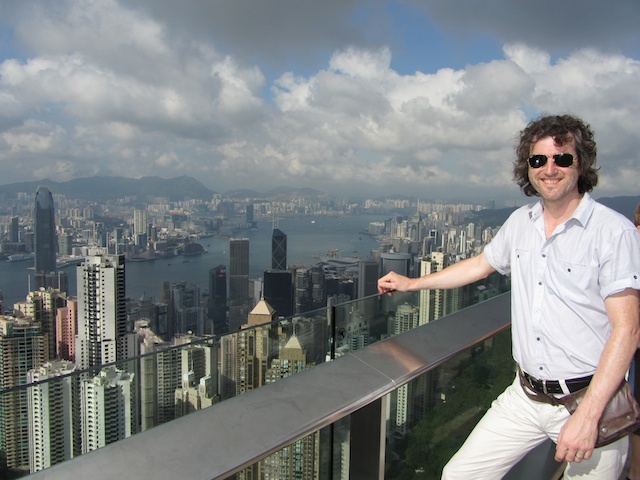 Looking out from the Peak

To complete our view of the city, we randomly chose a ferry in the harbour to find out what it looked like at sea-level. 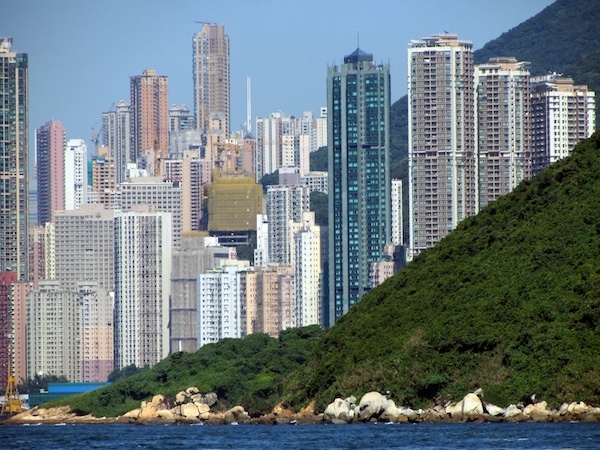 Hong Kong from the water

Nathan Lane is Kow Loon’s major shopping strip. We went out looking for shoe shops and tailors, but after a couple of hours of fighting off tailor-pimps and wristwatch-pimps in the street, we took refuge in a bar and drank margaritas instead. When we emerged, the bright lights were shining, and we decided that the best vantage point to enjoy them would be across the river in a steak house on the roof of a hotel, where we could order a ‘side dish’ of an Alaskan crab leg to go with our steak. 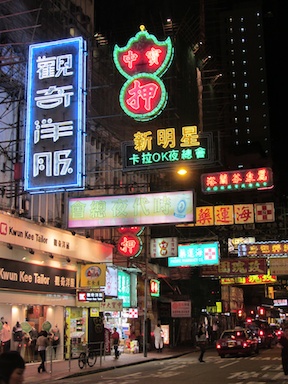 The lights of Kow Loon 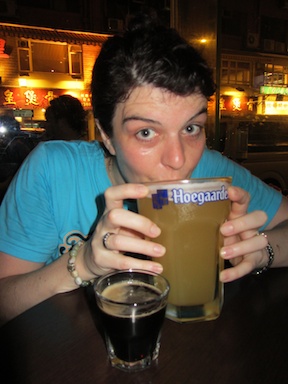 A monster glass of Hoegaarden

Alaskan crab with your steak, sir?