Queenstown, New Zealand, sits at one end of the beautiful Lake Wakatipu. If you’ve ever seen a postcard of snow-capped mountains reflected in limpid New Zealand waters, then this is where it was probably taken. From our lakeside hotel room we could see the twin funnels of a steam ship, and after a few days of skiing, bungy jumping, rafting and lugeing (Queenstown has got to be the adventure sports capital of the world), we felt that we could do with a change of pace, so  we clambered up the gangplank to see what was going on.

The lady and the lake

As soon as we got inside we were greeted by the gorgeous smell of hot steam and hot oil, and we realised that we had entered another world. The enclosed decks consist of galleries around a light well that drops down through the centre of the ship, giving an unobstructed view of the two enormous steam engines, the furnaces, and the busy crew of engineers tending to the vessels every need.
In its heyday the Earnslaw ferried some eight hundred passengers at a time, but there seemed to be only a few dozen people aboard, so we had plenty of room to watch. The crew scurried around the engines, checking gauges and lubricating everything in sight with long-nosed oil cans, while stokers piled coal into the twin furnaces. Finally the oil cans were put away, the enormous brass indicator rang ‘Ahead’, and in a cloud of steam the two screw shafts began to move.

I was spellbound.As the Earnslaw accelerated up to thirteen knots, the ship was filled with the mighty rolling thump of the engines and the comforting deep rumble of the prop shafts. The stokers stepped up the pace; the Earnslaw burns a ton of coal every hour.

Up on deck, the scenery was just as beautiful, and in between mesmerised trips down to the steam room, we sat and watched the shore and snow-capped mountains slide by.

The bow was a bit windy

Looking back toward Queenstown

An hour or so into the cruise we paused at the Walter Peak High Country Farm, an old but still operating sheep station which also boasts a rather splendid colonial restaurant serviced each evening by the TSS Earnslaw herself. A few of us got off to be greeted by our guide, a shepherd, who took us on a tour and explained what life was like living on the station.

We were treated to a sheep dog demonstration by some of the older, now retired dogs, who were still fleet enough to give a very impressive display of crowd control in a small group of bewildered sheep.

All present and correct

We were then introduced to a few of the stations sidelines, in the form of deer and Scottish highland cattle, before retiring to the main house for cream tea.

The highlight of the farm tour was the shearing demonstration. After we had eaten we were taken to a large barn, to be greeted by the most appalling squealing sound, which turned out to be a couple of young orphan lambs. Don’t ever be misled that lambs bleat, they don’t, they shriek; but we found that they soon quieted down if you picked them up, and Brownyn had a fine time bottle feeding one of them as we settled down to watch the demo.

A couple of adult sheep were milling around at the back of the barn. The shepherd manhandled one of them towards us, and then flipped it onto its back, whereupon it instantly went limp, and from then on it didn’t seem to care one whit either for us or for anything that happened to it. Out came some electric clippers, and the animal was firmly but gently shaved. I had expected it to wriggle and fight, but it just lay there uncomplaining on its back as it was moved this way and that, and before long it stood naked before us.

The pelt was surprisingly greasy to the touch, and heavy with protective lanolin.

The shepherd had all sorts of tales to tell, particularly about the annual gathering where everybody in the homestead combs the hills with horses and dogs in order to flush all the sheep, which live wild all year round, back to the farm for shearing. In fact, the papers only recently had carried stories of a sheep dubbed ‘Shrek’ which had escaped detection for six years and whose coat, when finally sheared, weighed 26 kilos, enough to make twenty suits. 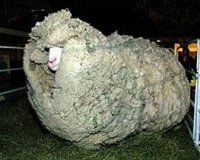 After the demonstration we wandered out of the barn, looking up at the forbidding steep hills and pondered on the hardiness of the shepherds who lived in this beautiful but lonely place.
Then a steam whistle blew from the lake. It was the Earnslaw, come to take us back to the modern world.