Before we left Great Keppel, Sue and Steve showed up on Tenacious D. Sue and Steve were not only our neighbours when we were preparing for our voyage back at Gibson Marina, but they were also the only long term cruisers that we really knew, and as well as being lots of fun they did a grand job of putting up with all our stupid questions during our final months of preparation. It was great to catch up. We had a bit of a yarn over a pancake breakfast and then they had a lunch date on another boat, so we hoiked up the anchor and set off to the north.

We had a long way to go, and there was very little wind forecast, but we managed to bravely leave under sail. It may have been slow, but it was peaceful. We noticed that the water was sparkling, and dipped a bucket in to see the diatoms and flagellates swimming about. We followed a lunch of chilli tuna salad on freshly baked bread with a small bottle of champagne and some lime jelly.

As the sun set prettily over the Queensland hills, we heard the dull thump of army munitions. This whole coastline is sometimes taken over for army training, and we’d heard on the grapevine that they were using it today. This meant that our intended half-way anchorage at Port Clinton was out of the question, so we were intending to travel all night to the Percy Islands.

The military zone extends quite far out to sea, so we had to arrange our course to avoid it. Pretty soon the wind died completely, and we spent the rest of the night chugging up the military boundary line under motor. Given the forecast, we felt pretty lucky to have had the sails up for as long as we did.

Bronwyn went below and I stood the first watch. Since there was very little swell, steering was pretty easy even though we were motoring, and I found that with the aid of a head torch I could steer and read a novel at the same time. The watch passed pleasantly swiftly, punctuated by the occasional yellow star shell drifting over from the military manoeuvres on shore.

Bronwyn took over from the small wee ones until pre-dawn. A sea fog threatened to roll in from the east, but it was low on the water and left the sparkling stars bright and clear above. Thankfully the fog never developed.

I was back at the helm just before dawn, which revealed another clear blue sky but still no wind. South Percy Island was in sight all morning. Most cruisers visit Middle Island rather than South, but after staring at it for so many hours we thought we decided that rather than simply steering around it, we would stop for the night.

There was quite a lot of debris in the sea, tree trunks and large branches, as well as a substantial quantity of what seemed to be an orange algal bloom. Half way up the eastern coast, and over a mile from shore, we encountered a large yellow snake swimming by. It was a metre long and looked a lot like a python rather than a sea snake, and had tied the end of its tail up in a knot, presumably for buoyancy or for balance. It stopped and regarded us with interest when we slowed and did a circuit around it, and then began once more swimming strongly out to sea. We wondered how it could see where it was going, with its head that close to the water. 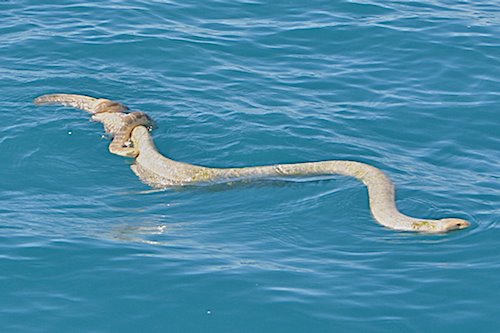 At half past two in the afternoon, we dropped anchor in a delightful sandy bay in the north eastern corner of South Percy Island.