We were living on our yacht and had recently arrived in Gladstone, Queensland, when I needed to get to a field course in Kalgoorlie, Perth, clear across the other side of Australia. Since both Gladstone and Kalgoorlie are mining towns, we reasoned that I would be able to get a reasonable connection. We looked into buses, trains, and cars as well as aeroplanes, but flying was by far the cheapest option, and when I boarded the planes they were awash with fluoro shirts of mine workers changing shifts. We arrived at dawn, and I got a good look at the landscape. I had expected it to be completely flat and red, and indeed it was, but I was surprised to note that it was lush with free-standing gum trees, marching in green rows to the horizon. 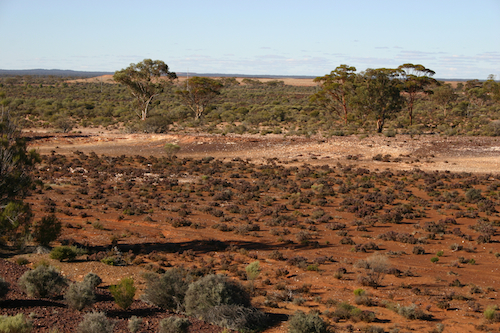 As we came in for landing, we flew over a number of open-cast pits. We didn’t fly over the Super-Pit, because overflying that enormous cavity was banned after the updraft caused an airliner to crash a few years ago. 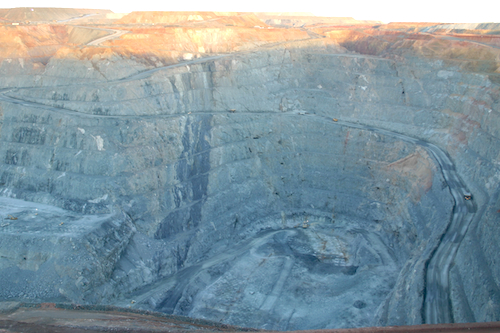 KCGM Superpit. For scale, the tiny yellow truck on the far right is about 10 metres wide

Since I only had about twenty kilos of luggage, mainly text books, I decided to hike in rather than catch a taxi. I like to approach a new town slowly so that I can get a better feel for it, and I certainly needed to kill some time before anything opened, so I set off. It was strange to wear shoes again after all these months, and in addition they were brand new steel-toe work boots that I had been trying to break in on the beach, which must have looked quite amusing. 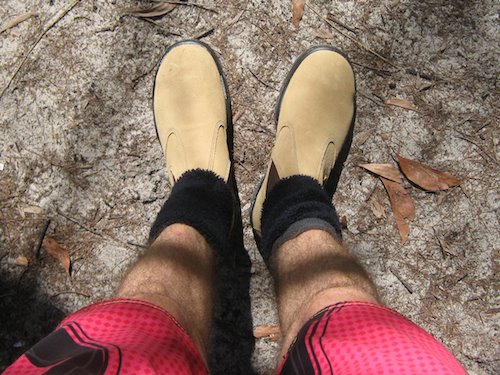 It was a very pleasant walk, and I was amused to see that most of the horizon at ground level is taken up by the artificially straight lines of mine tailings. I passed some pricey-looking new residences with expensive cars outside, and a number of scrubby little trailer parks, some of them glorying under names like “your golden nugget holiday home”. When I finally arrived at the hostel (The Kalgoorlie Backpackers), I found it to be clean and presentable, and after a brief snooze on a sofa I was shown to my room for the week. Most of the days and indeed the evenings were taken up with field trips, study and revision, but I did get out to see the town once in a while. 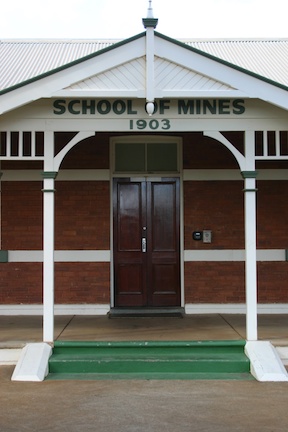 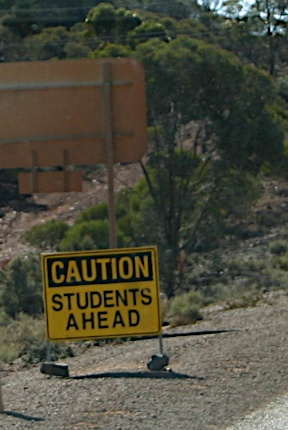 Most of the buildings date from the late 1800s, and the town is very well preserved. Clearly the mine companies bring in a lot of money. The schools look nice, too, although all of the shops had stickers in the window announcing that they would not serve children during school hours. There are enough shops and small restaurants to make it interesting, as well as a good number of pubs. 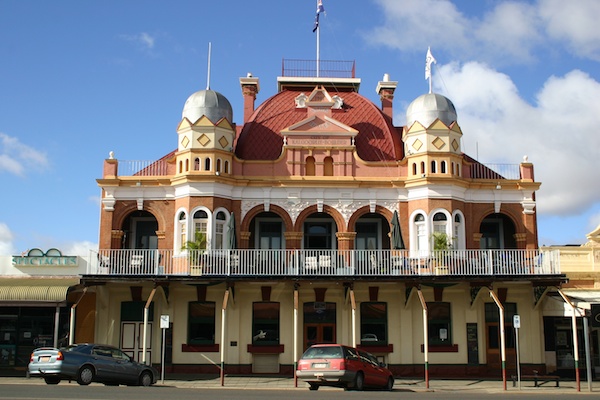 The streets are very wide indeed, apparently a hangover from the days of horse-driven road-trains, and the council has recently gone to the effort of replanting all the central reservations and borders with native flora. The only problem with native grasses is that they aren’t good to walk on, so where pedestrians might be expected to pass, they had laid down astroturf instead of concrete. This might sound a bit strange, but it provided a nice contrast with the red mud and somehow didn’t look out of place at all. When I’d been searching the internet for a hotel, I had noticed that several of them offered “brothel tours” as a standard service. I wasn’t entirely sure whether they were referring to historical museums or to working girls, but I was soon to find that on the other side of the street to my hostel was ‘Questa Casa’, claiming inevitably to be Australia’s oldest brothel, but which offered tourist visits by day and more traditional services by night. 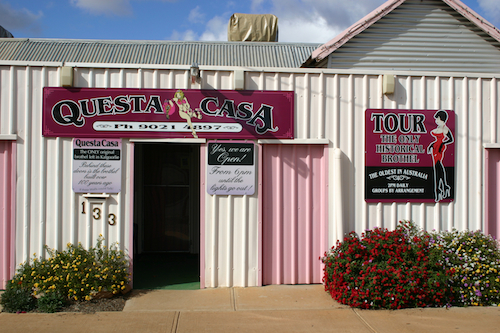 On our final night, a few of us went out for a meal at a Thai BYO (bring your own alcohol) restaurant one night, and it fell upon me to go out and find some wine. The first place that I tried was the Exchange Hotel, one of the three main central pubs. There were the usual dress code signs on the door, including an embargo on steel toe caps after 9pm. Since I was wearing mine, I wasn’t sure if they would let me in, but as it turned out the bouncer was leaning on the juke box having a chat with some mates rather than paying full attention to the door, so I presume that they don’t get a lot of trouble. That was a pleasant start; I have a deep and abiding hatred for officious door staff. I ambled around a bit, peering between the guys at the bar to see if I could spot any bottles of wine amongst the racks of beer and coke, and suddenly realised that there were a couple of semi-naked girls bouncing up and down trying to get my attention. The barmaids were all wearing lingerie and little else, and a pleasant bubbly blonde laughed when I asked after wine and sent me to the Irish pub next door. I guess it isn’t a wine sort of place. Paddy’s had a selection of two red wines, so I picked one and ambled back to the restaurant. Some of the guys had been to Kalgoorlie before and they laughed when I mentioned the barmaids; apparently they’re called “skimpies” and work every night at the Exchange. It seems that they used to be quite ribald but there was a crackdown recently and now they’re much tamer. The Thai meal was nicely presented and very tasty, although of course (being Australia) very mild. At the end, the chef came out to see if we’d enjoyed it, and seemed on the point of apologising for using too much chilli before she took in our effusive thanks. Having eaten and drunk everything in sight, we decided to go on to the Exchange where they were happy to serve us unlimited pints of lager and stout, but no spirits, not even over ice. I asked one of the lasses about it and she said that this was a specific rule at the Exchange; you could only drink spirits with mixers. 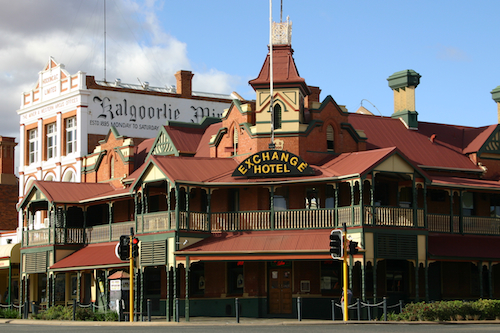 The pub had a pleasant blokey atmosphere. Most of the patrons were wearing fluoro shirts and boots from a day at the mines, and some were drunk enough to be dancing on the pool table and using the chalk to write on the ceiling. The skimpies came out often to chat to the drinkers and panhandle for tips (“If we get enough tips we might take some more clothes off”), and it was all very friendly and nobody hassled them. There were only two female customers, two young girls who seemed to be regulars and went everywhere together, although nobody seemed to pay them much attention, even though they weren’t wearing very much either. The two of us who were still standing at two in the morning did try to make it to one of the other pubs, but it seems (thankfully… we had an exam next day) that everything closes at the same time, and we staggered back to our hotels. As I sat on the plane home, trying to ignore the pain in my head and looking forward to a week of exams in Gladstone, I reflected that Kalgoorlie would not be a bad place to live at all.