The January weather in England was typically dire, and neither of us were working, so we rented a flat in Malaga. The idea was to spend a relaxing few weeks just hanging out in the sun and learning Spanish. We got a cheap flight and before we knew it we were ensconced in a nice little apartment in the centre of the city. 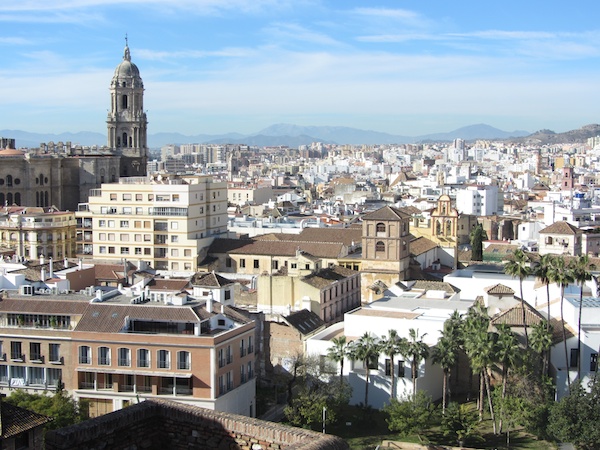 Although we’d only recently been in Malaga on another jaunt and still remembered our way around, we thought that we’d take a guided bicycle tour of the city with Malaga Bike Tours, which proved to be a lot of fun. Coincidentally it was also a bank holiday, el Dia de los Reyes, which is the day that Spanish children open their Christmas presents, and so the town was empty and quiet. Our guide, Izzy, was very relaxed and more than happy to sit around waiting in the sun while we nipped off to examine the inside of churches or explored the botanical gardens. 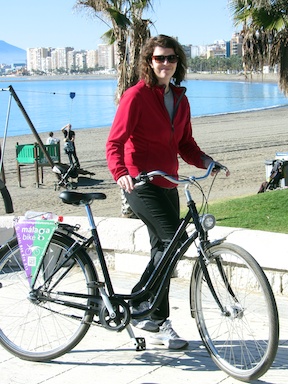 Girl on bike, with Malaga in the background. 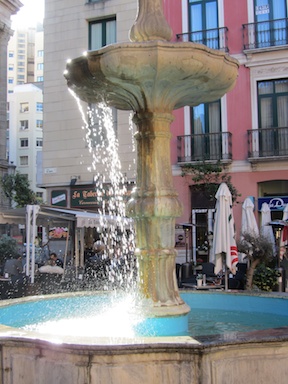 Fountain in the Plaza del Obispo

Malaga and indeed much of southern Spain was Moorish territory for hundreds of years before the Christians pushed this far south, and so the architecture is often a blend of the two architectural styles. When Mosques in particular were captured, they were often simply re-purposed as churches with little amendment. The result is that the churches are often a lot more colourful and intricately carved than is usual even in Catholic Europe. 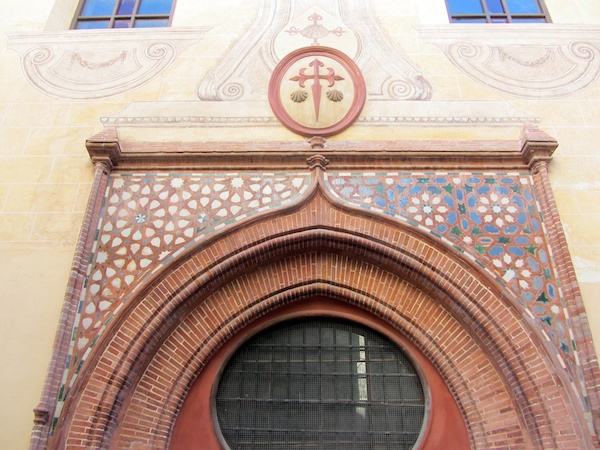 Mosque doorway in what is now a church

On the other hand, Malaga’s cathedral was built from the ground up, the project taking long enough that it embraces the Gothic, Renaissance and Baroque styles, until finally the project ran out of money when building the second of the planned two towers. The cathedral quickly gained the affectionate nickname La Manquita (the cripple), and when much later the authorities planned to finish the tower, there was an outcry and she was left alone to this day. 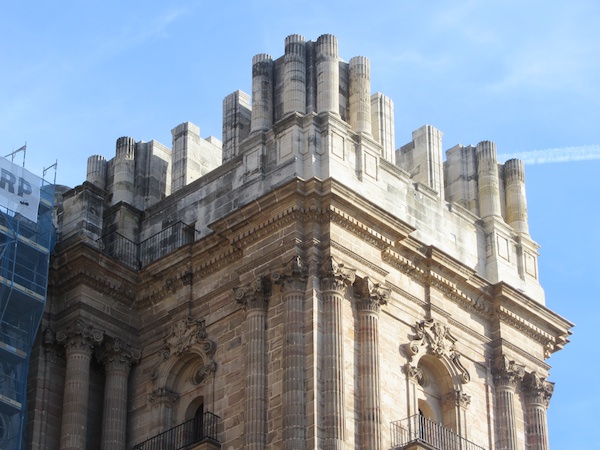 The city is bisected by the Guadelmedina river, which in common with most of the watercourses that descend from the mountains of Malaga is really a dry wadi, particularly since it has been dammed to form a water supply. An attempt has been made to turn the dry river bed into a recreational area with grass and fountains, but unlike the rather splendid linear park in Valencia, the architects haven’t really pulled it off. All that remains is a beaten-up and graffiti-strewn strip of rubble that is largely used by dog-walkers and skateboarders. 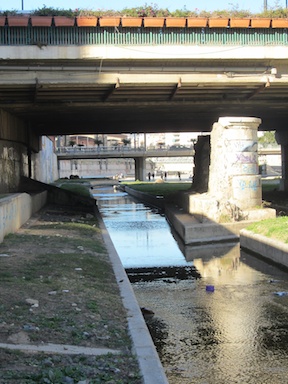 Looking upstream on the Guadelmedina 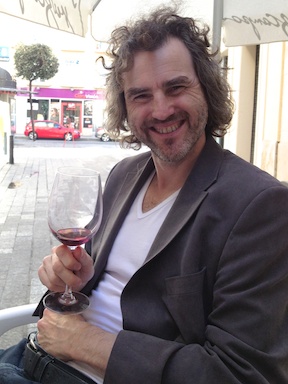 Una copa Rioja? Don’t mind if I do. 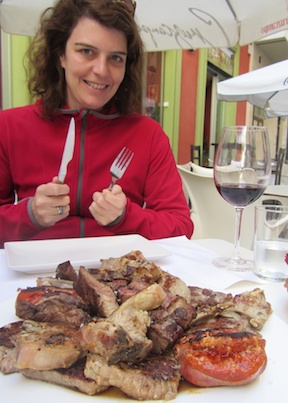 No vegetables were harmed during this meal. 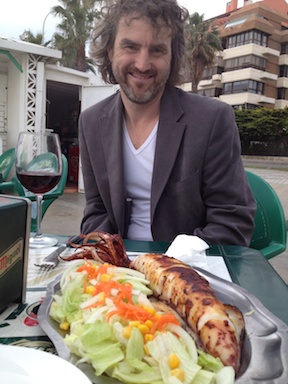 Now that’s what I call a calamari!

The Alcazaba
High above the city are two castles or palaces, the Alcazaba and the Gibralfaro, joined by a slender double-wall that snakes up the ridge between them, a little reminiscent of the Great Wall of China. Originally built by the Arabs, they have been repaired and rebuilt many times across the centuries, resulting in an interesting mish-mash of styles. Even the original builders incorporated pillars and dressed stone from an earlier Roman amphitheatre. 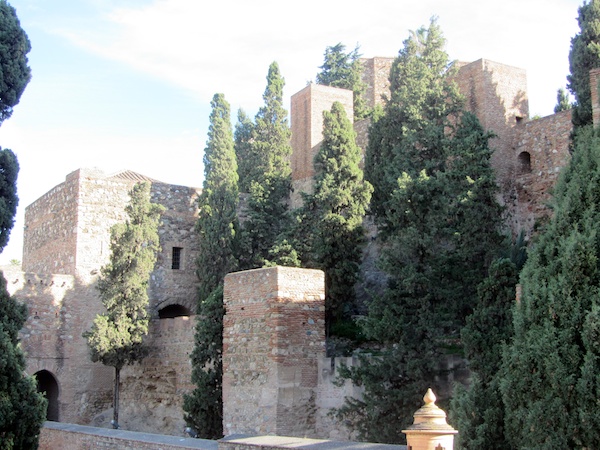 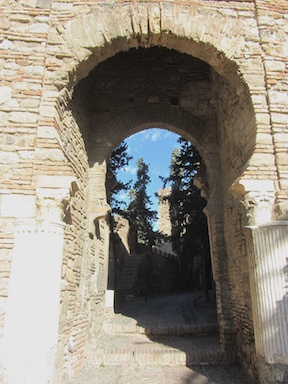 Roman pillars in a Moorish arch 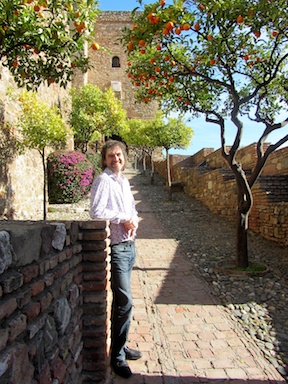 Orange trees in the Alcazaba

The palace, now only a shell, must have been stunning in its day. Even now, little fountains play in the courtyards, and tiny artificial streams run in channels down the centre of every mosaic path. It is a very beautiful and relaxing place. 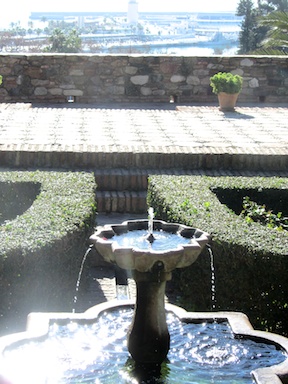 Fountain in the Alcazaba palace 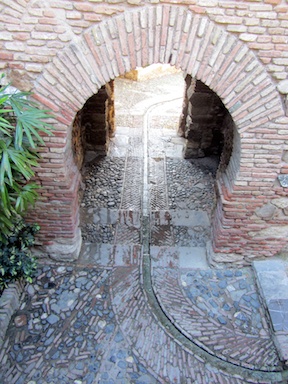 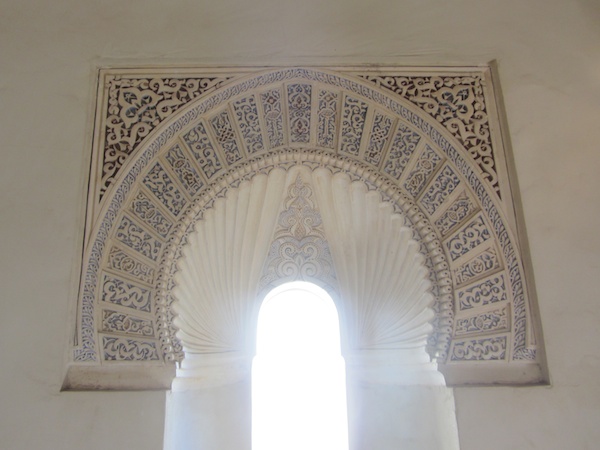 Window detail inside the palace

The Gibralfaro
Although originally you could walk along the defensive wall between the two castles, that path (Le Coracha) is now closed to visitors. However, a switchback of marble tiles takes you along the south side of the wall, with views out over the port and bull ring. 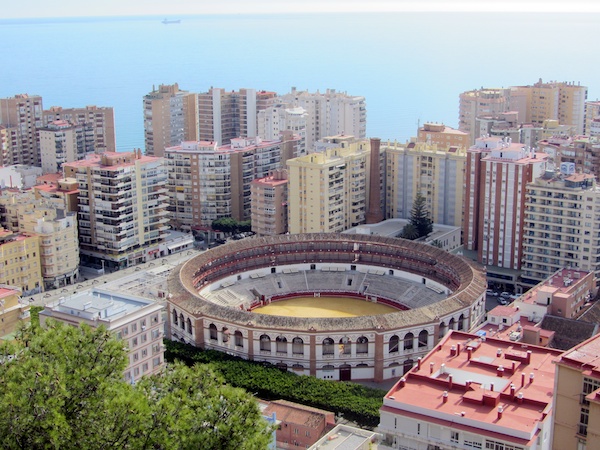 Malaga bull ring from the Gibralfaro

There isn’t too much left of the palace itself, but a walkway along the fringing wall is worth it for the views. 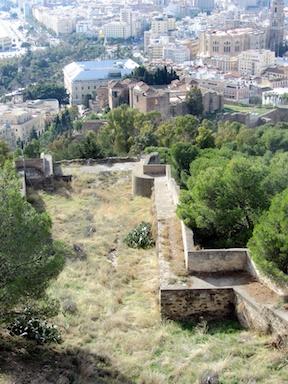 View down the Coracha to the Alcazaba 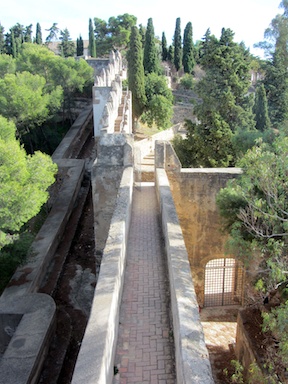 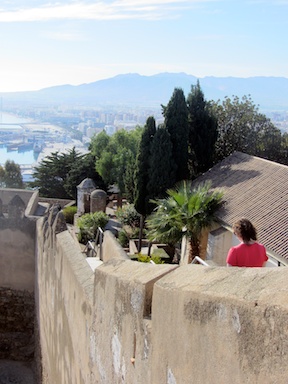 A walk along the wall 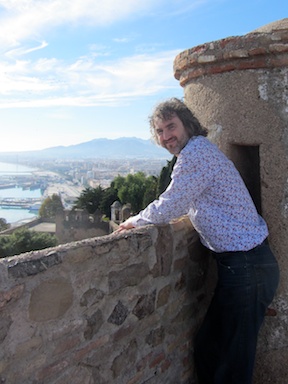 Jardin Botánico-Histórico La Concepción
Out beyond the northern suburbs of Malaga lies La Concepción, the world-famous botanical gardens created back in 1855. Climbing up the side of a steep hill, the gardens comprise a network of little paths and streams crammed with biological specimens from all over the world, all luxuriating in the balmy Malaguese climate.

It took us a while to get out there, because rather than take either of the direct buses, we inadvertently chose the slow stopping bus which eventually dropped us in a nearby suburb, but local buses are always an adventure, and we happened to get off outside a farmer’s market which allowed us to buy cherries for lunch.

We spent the whole afternoon wandering around the gardens, enjoying the different collections and relaxing in shaded corners to enjoy the views. 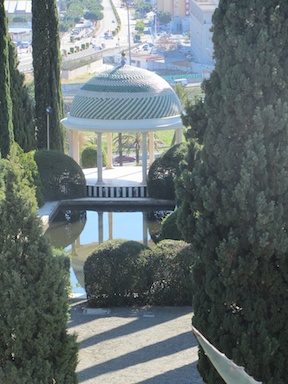 The Cupola in Jardin Botanica 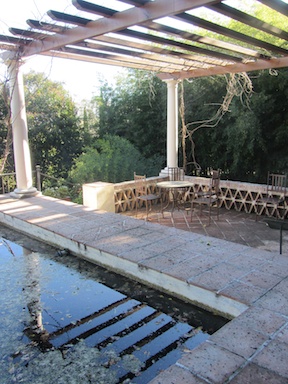 Moorish styling in the botanical gardens

Hammam al Andalus
And finally, what better way to recover from a hard day’s tourism than to relax in an Arab bath house? We visited the Hammam al Andalus several times. There are hot, warm and cold pools, hot stone slabs, and a steam room. The interior is just beautiful and there’s nothing quite as relaxing as lying floating in a hot pool while gazing up at the intricately carved domed ceilings. 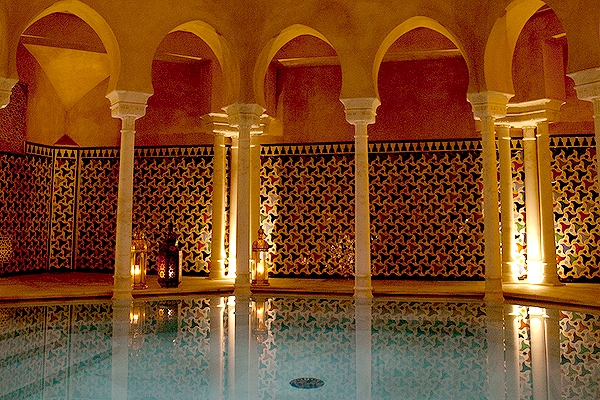 The hot pool at Hammam Malaga (promotional photo, not one of mine)

We also indulged in a few kessa massages, which involve a series of gentle and relaxing sensations. First hot water is gently poured over you body, then you are covered in an enormous lather bubble which pops gently against your skin, before finally being scoured by an exfoliating glove… and repeat. It is superbly relaxing. If we lived here, we would go every week.