The grape vines that we helped to prune last year were now due for harvest (vindimia), so we flew back to Extremadura in Spain to see if our efforts had been successful. It was a long drive from Madrid and we didn’t arrive at John’s finca until the small wee hours, but there was still time for a nice glass of wine before bed. In the morning we met the rest of the crew and headed out onto the slopes. 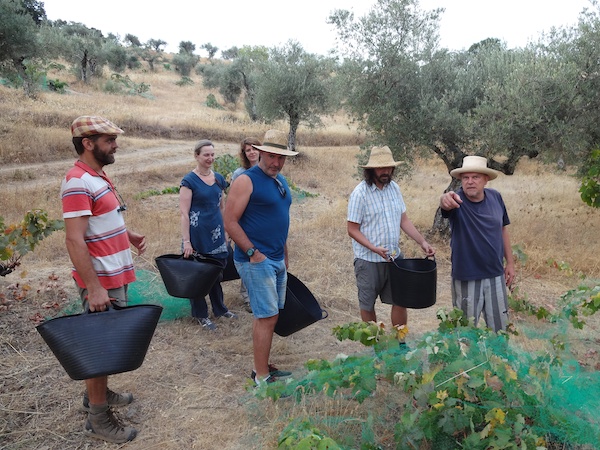 We’d heard that the vines had had a bad year, and at first we were a bit nervous that this was down to our pruning efforts, but it soon emerged that it wasn’t just “our” vines that had suffered, and indeed all the other local vineyards had also been hit by the dry growing season.

Last time we’d seen these vines, they were little more than gnarled stumps dotting the hillside. It was fascinating to see how they had responded to our pruning, with two leafy stems springing a metre or more from each carefully selected nub. Some stems were bare of fruit, many held only a bunch or two, but some were weighed down with grapes. 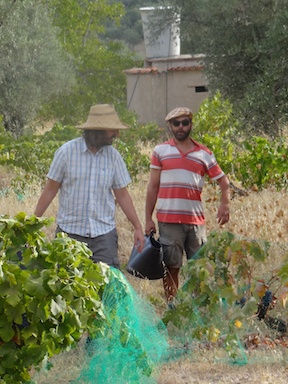 Rafa and Jorge get to work 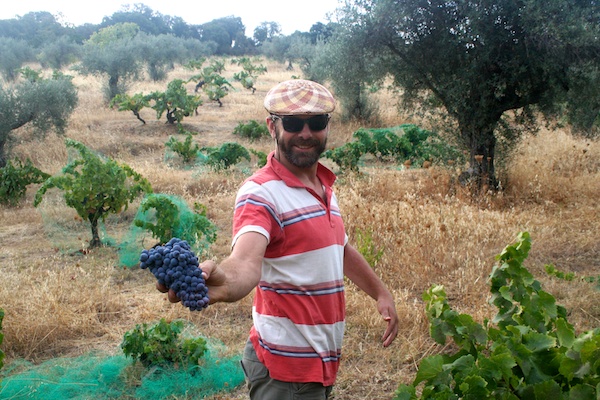 Jorge, some grapes, and a nice view of the vineyard 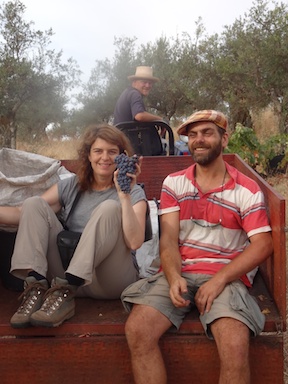 Bronwyn and Jorge and the first sack 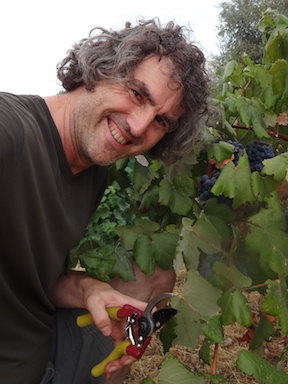 A few of the bunches had been attacked by fungus, and could not be harvested. A badly timed frost had wiped out many of the tempranillo buds, while leaving the other varietals intact. Up on one slope, a surprising quantity of fruit had sustained some kind of physical damage despite being protected by nets, so we cut out the bad ones before tossing the good fruit into the basket. 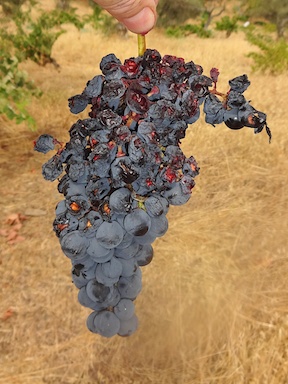 The top half are damaged 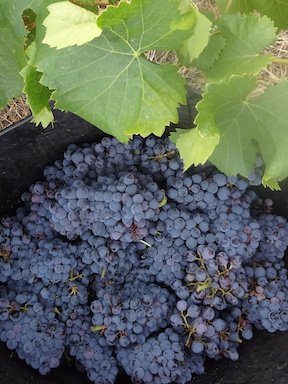 Most of it’s OK, though!

Soon our hands, clothes and tools were dripping in sticky juice under the hot autumn sun. Pausing occasionally to snack on fresh figs or swig water from bottles, we laboured on until the tractor trailer was crammed with sacks of fruit. 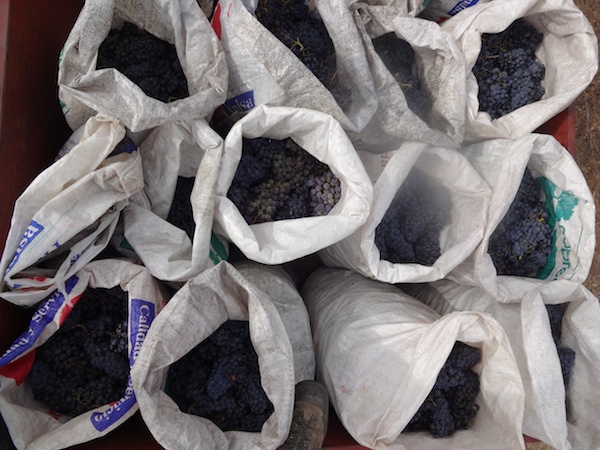 Twenty sacks of wine grapes, not too shabby

Friends arrived from a neighbouring finca, bringing still more friends, and we tucked in to a table groaning with food, washed down with cold beer. 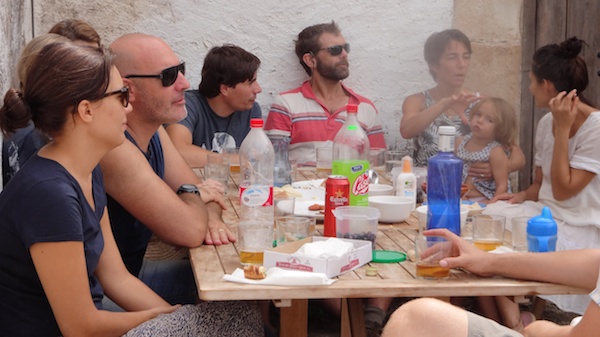 A break for tapas and beer

Then we needed all hands on deck to unload the grapes from the sacks into buckets, pour them into the crusher, tote away the buckets of stalks, ensure that each grape made several passes through the machine, and finally convey the buckets of sweet juice to the wine vat.

Everything depends on getting this right, and so it is intense and focussed, but also great fun. In the short breaks between unloading each sack of fruit, I looked around the sunny courtyard filled with busy smiling people, and it seemed that I could feel the presence of generation after generation of winemakers, all meeting in this place at this time of year to begin the magic. 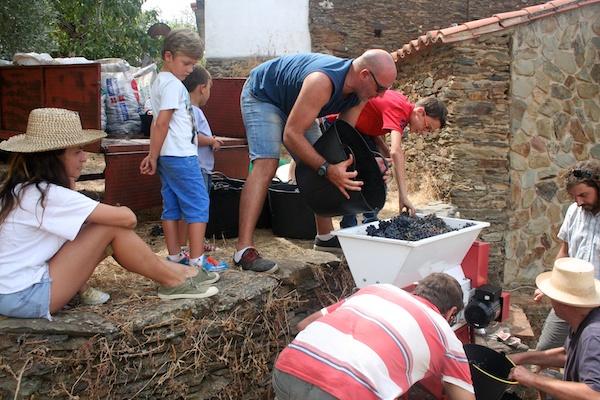 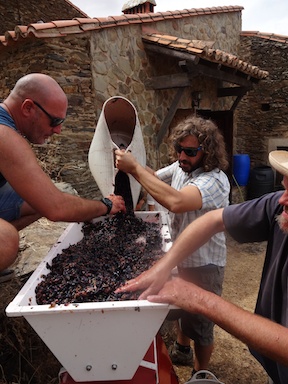 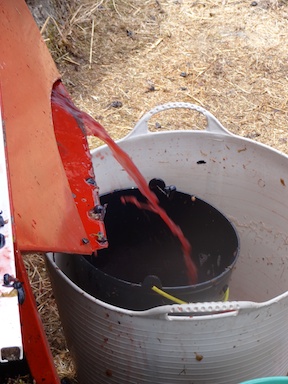 …and out comes the nectar 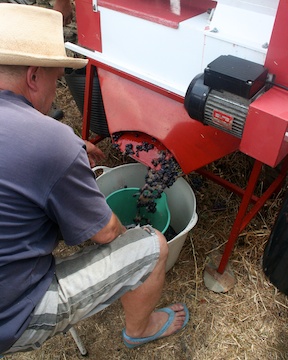 The grapes and skins go through a few times 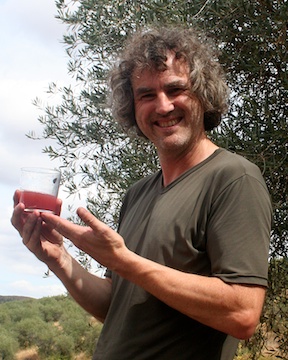 This is what it’s all about! 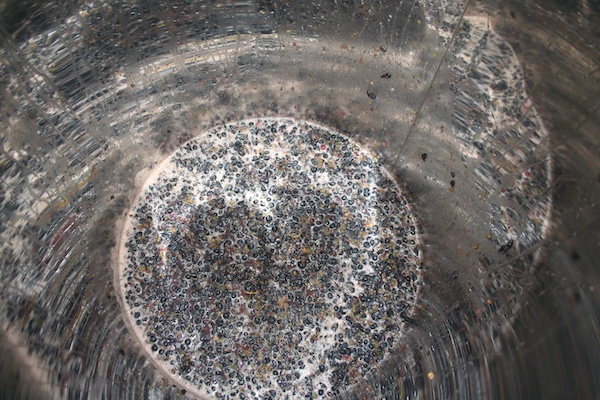 Into the vat, complete with skins

Five hundred litres of grape must later, it was time to make up a batch of yeast and start the fermentation process. The vats would now need to be stirred every two hours for the next couple of days, so John wouldn’t get much sleep but it’s worth it to get decent quality wine. 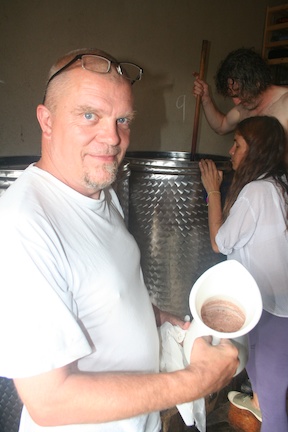 Starting the yeast in the must 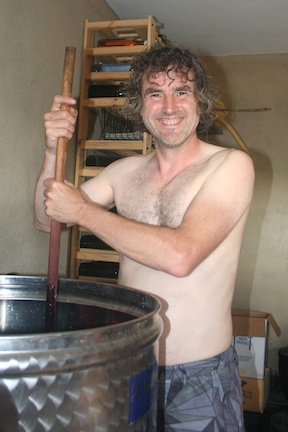 WIth the main tasks completed, it was time to take the children on a tractor ride while we started to tidy up and hose down. When the kids returned, they took over the clean-up, although possibly the dogs and children may have ended up wetter than the equipment. 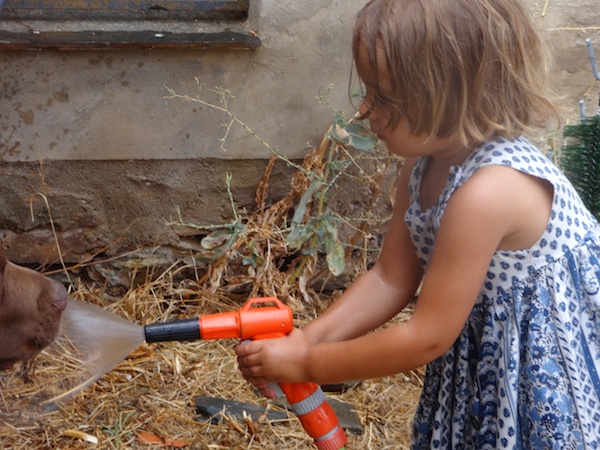 Everything is sticky and needs a wash 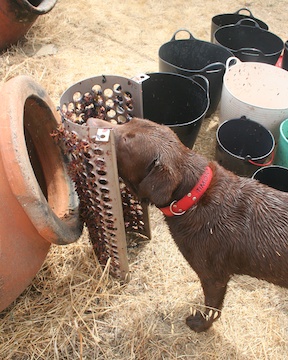 All hands to the clean-up 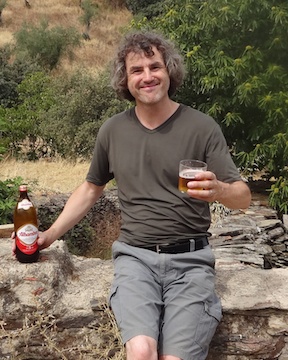 Later that evening, the neighbours threw a party which went well into the night, drinking wine and chatting under the stars. We didn’t emerge from our beds until the following afternoon, briefly considered clearing up the nets from the vineyard, and then put that off ’til tomorrow in favour of a hike up to the old Roman dam. On the way back down, we collected blackberries to make jam, and set them boiling while we settled down to yet another sumptuous meal. There isn’t anything quite as relaxing as a lazy evening at the finca. 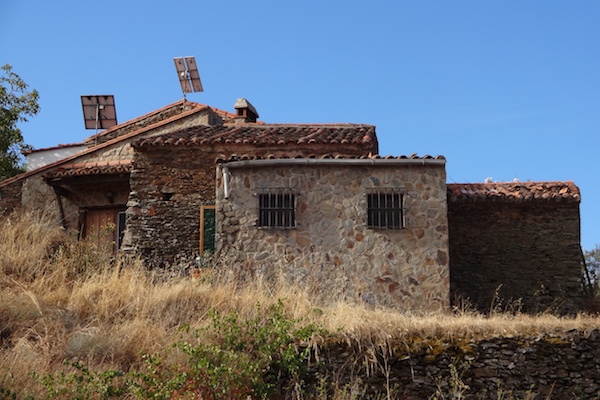