We bade a leisurely goodbye to Mackay Outer Harbour, and ran gently up the coast before a light breeze. It was a beautiful day and a relaxing cruise in a turquoise millpond sea.

At one point we saw a big old turtle, drifting backwards in the current, his shell completely invisible under a waving portable reef. Bronwyn saw another snake. An enormous eagle flew out from a wooded island to see if we were edible. And those were the day’s excitements. Very serene. 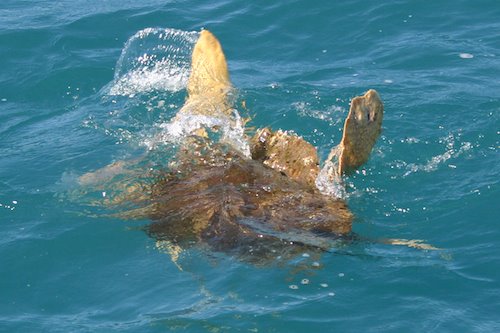 THE TURTLE JUST AFTER WE STARTLED IT

We had planned a route that would take us through three island groups, all with suitable anchorages. We just kept going to see how far the wind would take us, with Harriet steering and the human crew lounging around on deck reading books.

We got as far as the Sir James Smith Group, where the cartography is delightful. Rather than the usual dull names that litter Australian charts (Black Rock, Flat Island), some unsung hero had waxed lyrical on the theme of “Smith”. Thus Goldsmith Island is flanked by the Ingot Islets, Specie Shoal, and Bullion Reef. Similarly, Blacksmith Island is accompanied by Hammer, Bellows, Forge, Pincer and Anvil Islands. Off to the south of Tinsmith Island is an islet with the name of Solder. And so on. Very cute. 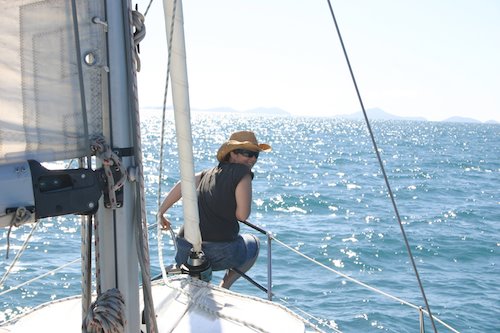 There were only two other yachts in the main anchorage at Goldsmith Island, but there was a lot of reef lurking beneath the surface and it was hard to see if there was enough swinging room. In any case we couldn’t get our anchor to bite, so we moved around to the north west and got it down in the next cove up. We’d had sou’westers all day, and it was now blowing from the north east, but since the two arms of the cove had both of these directions covered, we thought that we’d be fine. 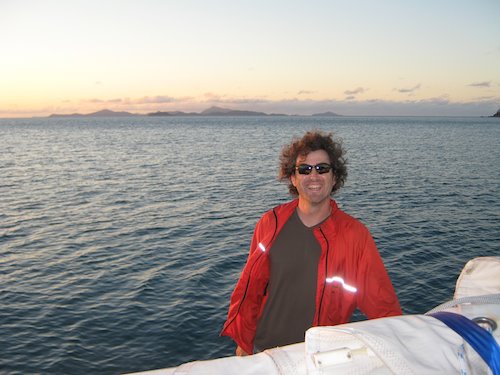 ALL PACKED AWAY. HOW ABOUT A SUNDOWNER?

It was quite comfortable until the middle of the night when we mysteriously got a developed swell coming in from the north west, broadside on and very uncomfortable. Shortly after dawn it got noticeably worse and the wind start to howl in the rigging, so not even stopping for coffee we quickly upped anchor and went back to the shelter of the first anchorage, where the anchor bit first time. While we were manoeuvring about, the depth sounder showed some very deep holes in the sea bed, which may have accounted for our problems on the previous night.

As we poured the coffee, a sou’easter blew up at close to 20 knots and dark storm clouds rolled in overhead. There was no internet reception, but I plugged in the satphone and got a forecast for 20-30 knots and rough seas. We changed our mind about exploring the island by dinghy and made breakfast instead.